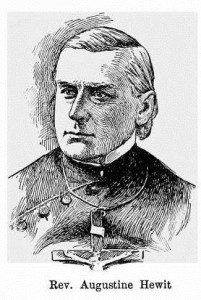 Father Hewit is Dead. The Head of the Paulists Passes Away at the Monastery in this City. Sketch of His Life Work. Associated with Other Denominations Before He Became a Roman Catholic— The Church that Stands as His Monument. (The New York Times, July 4, 1897)

The Very Rev. Dr. Augustine F. Hewit, Superior of the Community of Paulist Fathers, died in his apartments in the monastery in West Fifty-ninth Street, west of Columbus Avenue, at 9 o’clock last night. At the last moment Father Elliot, Father Deshon, Father Smith, and a nurse were at the bedside. Father Hewit was one of the founders of the community of Paulists. His priesthood was almost exactly contemporaneous with the existence of the community up to the time of his death. In his twenty-sixth year he became identified with the order, and ever since that time the history of his life and work have been practically the history of the Paulists.

He was born in Fairfield, Conn., Nov. 27, 1820. His father, Nathaniel Hewit, was a sturdy Congregationalist minister , and his mother was the daughter of an Irish Presbyterian minister. His name was originally Nathaniel Augustus, but when he joined the Paulist congregation he assumed the religious name of Augustine Francis. At twelve he had completed a course at Phillips Academy, Andover, and afterward was graduated from Amherst College.

His first inclination was toward the law, but, coming under the influence of religion, he determined to devote his life to the ministry. He gradually grew away from his Presbyterian environment, followed for a while the teachings of the Epsicopal Church, and finaly became a Roman Catholic. He was ordained a priest March 25, 1846, and his first labors were performed in Charleston, S.C. While in Charleston he allied himself to the Redemptorists and became Consulter to the Provincial andwas high in the councils of that order.

In the meanwhile Father Hecker had founded a new community which he called the Paulists. It was essentially an American order. Father Hewit joined Hecker in the work of organizing the community, and when, by order of the Pope, the Paulists and Redemptorists were separated, he cast his lot with that of his friend. During the early days of the formation of the Paulist order Father Hewit’s great scholarship, his balance of judgment, and his intellectual keenness gave to his counsels a weight and maturity that had no little influence in pruning the spirit and traditions of the community.

He was the teacher for thirty years in the Paulist scholasticate, and had a great influence in the training of the present Paulists. When Father Hecker died Father Hewit succeeded him as Superior General of the Congregation of Paulists, and has been since that time the actual head and heart of the order. His principal associates and coworkers in the order have been Fathers F.A. Baker, G. Deshon, and C.A. Walworth.

After the new congregation had been founded, a modest home for it was offered by George V. Hecker, who for this purpose set aside a part of his own house in this city. Work was carried on by missionaries, who strive to enlarge the community, and a number of new converts were soon gained. Later the congregation moved into a former boarding house in Thirteenth street, in the vicinity of several Roman Catholic churches. Mr. Hecker afterward gave up the greater part of his house so as to meet the demands of the congregation, which was growing rapidly.

The order noe began to assume its present name and characteristics, and Archbishop Hughes was shaping its permanent organization. Soon enough money had been given and collected to authorize laying the foundation of the church at Fifty-ninth street and Columbus Avenue. This edifice was completed as rapidly as possible, and has ever since been the home of the order. A parish has grown up around the church as large as any in the city.

Father Hewit was the author of several theological works, and wrote a large number of articles in Roman Catholic periodicals. Among his writings in English are: “Problems of the Age,” “Studies in St. Augustine,” “The King’s Highway,” and a recent translation of the Gospel of St. John. He was always a close student of theology, and was familiar with the mass of dialectical literature on both the Catholic and Protestant sides. Among his works that are most purely theological may be mentioned “Memoirs of the Rev. Francis A. Baker,” “Life of the Princess Borghese,” “Life of Damoulin-Borie,” and “The Little Angel of the Copts.”

The Roman Catholic Church showered its honors upon him, and in recognition of his work, Pope Leo XIII conferred upon the degree of D.D., and his alma mater, Amherst College, also gave him this degree. His life’s services, however, have found their best recognition in the grand result of his efforts. The congregation of the Paulists,  the splendid church which has become the centre of a flourishing parish, and the homes and schools about it, are his most fitting monument.

January 18, 2013 Civil War Chaplain Becomes Bishop: Bishop Lawrence S. McMahon, Hartford, CT (1835-1893)
Recent Comments
1 Comment | Leave a Comment
"Very interesting. Why did the Jesuits change the name of the school from a saint's ..."
Kristin Nealon Wilson Ocds Who’s Buried in Catholic Cemeteries?
"It is a joy to that you are back blogging. Thanks for the reference to ..."
Joe A Church Historian’s First Communion
"Thank you for all your enjoyable, informative posts on Church history. I agree that the ..."
Kathleen Brady Looking at the Scandals– A Church ..."
"Such laws might have done Ireland some good, in the case of the Magdelenes. The ..."
HematitePersuasion “A Million Foreigners, Most of Them ..."
Browse Our Archives
Follow Us!

The Demand to Open Churches Is...
suspended in her jar
Related posts from McNamara's Blog