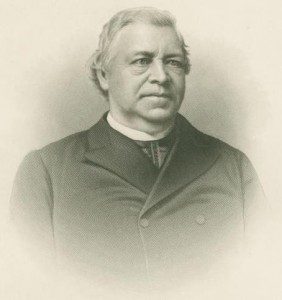 “The Day We Celebrate”: Rev. Sylvester Malone at the Annual Banquet of the Friendly Sons of St. Patrick, March 17, 1884

“The day we celebrate” comes to us but once a year, yet its influences have been felt by our race on every day of the year through which it has run. Going back fourteen hundred years, “the day we celebrate” brought light where there was darkness and life where there was death. It brought a pagan people from idolatry to knowledge of Christianity; and thus it was a day of deliverance, a day of true freedom, a day when the galling chains of the worst kind of slavery were broken forever. St. Patrick’s Day should, therefore, be honored by all of our race in a special manner, for its real teaching is religious. It is in these doctrines that millions of our ancestors in every succeeding age have been enlightened; millions who have fought the good fight and have gained the crown; for there has been no break, even for a day, in the current of Catholic truth among the Celtic Irish race since St. Patrick successfully established the Catholic faith in Ireland fourteen centuries ago.

It is said that at the close of the life of this one Apostle the whole island resounded with praise of Jesus Christ. This can hardly be said of any apostolic laborer in the work of evangelization in any other part of the world. It took centuries, filled up with the martyrdom of its teachers, before it was true in any other country to say of it that it was one of faith and morals. It is truly a day for us to celebrate when we can go back so far in point of time and find our whole island crowned with the Christian laurel of victory. Again, as we advance through the following centuries, till the cursed invasion of Ireland by Henry and his followers, we find religious foundations of Christian learning planted in many places.

The centres of learning—monasteries, colleges, and universities—were generously patronized by the sons and daughters of Erin. They gave shelter to thousands, fed them not only with bread and meat that nourished their bodies, but gave them the better food of truth and religion. Out from these institutions went forth the wise and the good, to promulgate the truth which St. Patrick brought from Rome as the one sent by the Holy Church. So great was the zeal of his followers that it carried them outside of the island, even into England, to Scotland, Wales, France, Germany, Switzerland, and other European nations, where they planted the cross and left after them memorials of their apostolic zeal, some of which still exist. We find many towns and cities which bear the names of Irish saints who were their teachers in secular as in religious lore. “The day we celebrate ” in those centuries was when Ireland was her own master, when she was free, when the ruthless tread of the British cavalier was not heard on her plains, and when Irishmen themselves were masters in their own Israel of the new dispensation.

The era of a sad and ruinous change came with the dominion of England, which has lasted till this present hour. It shall not last, though, forever. For over hundred years, the Irish have been carrying the cross with the Divine Master, and holding unflinchingly to Catholic truth. It is the one undeniable fact in the history of the Irish race, that they could not be induced to give up the rich inheritance of faith they received through St. Patrick. Murder, assassination, robbery of their goods, wars of conquest, rapine and slaughter, butcheries the most brutal and cruel in the annals of the race, penal laws written in human gore—none of these, nor all of them combined, were able to shake their faith in God or His Church, for which they have ever shown the most profound reverence.

It is this looking into this future world, their true home, that has ever made the Irish people so buoyant, so cheerful, so gay, so witty, so enduring, ‘so long-suffering, so merciful, so generous, and so loving of fatherland. What faults you may find in them may be set down to the general source of all error, human nature, and then to the British Government, that has destroyed their industries, ruined their commerce, and deprived them of the means of education. “Omnium malorum mater est ignorantia.” Their virtues come from “the day we celebrate,” and are recognized by their most determined opponents, for they are generous, faithful, trustworthy; their daughters are pure and their sons are brave.

In no part of the world is the day more universally recognized, Ireland itself not excepted, than in our own great country, where Irishmen have given their lives in the bloody conflict against English assumption to rule us. From the Battle of Bunker Hill,  Irishmen have ever been found fighting on the right side—the side of their adopted country. “The day we celebrate” will then always be honored here, where we find Irishmen and their descendants filling every office in the gift of their fellow citizens. And as time goes on, the sons of Irishmen, with their great energy and will, with their brilliant talents, their culture, their education, their sobriety, will hold their proper places in the affairs of state, and their manner and mode of celebration will commend itself to the intelligent admiration of all citizens.

PLEASE NOTE: The above has been edited in the interest of blogging brevity.

March 21, 2013 Catholic Poetry
Recent Comments
1 Comment | Leave a Comment
"Wow! I didn't know about that Statement from the US Bishops. The fact that they ..."
Florence Ziegler “It’s About Time They Got Here”:  Catholics ..."
"Very interesting. Why did the Jesuits change the name of the school from a saint's ..."
Kristin Nealon Wilson Ocds Who’s Buried in Catholic Cemeteries?
"It is a joy to that you are back blogging. Thanks for the reference to ..."
Joe A Church Historian’s First Communion
"Thank you for all your enjoyable, informative posts on Church history. I agree that the ..."
Kathleen Brady Looking at the Scandals– A Church ..."
Browse Our Archives
Related posts from McNamara's Blog