James Ryder Randall and the Music of the Civil War

James Ryder Randall and the Music of the Civil War May 31, 2013 Pat McNamara 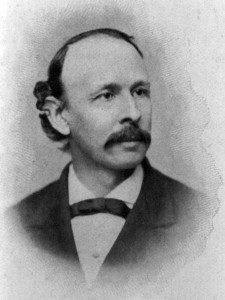 Journalist and poet, b. 1 Jan., 1839, at Baltimore, Maryland; d. 15 Jan., 1908 at Augusta, Georgia. As author of “Maryland, my Maryland”, the famous war song of the Confederacy, he has been frequently styled the “Poet Laureate of the Lost Cause”. He received his education at Georgetown University, but did not graduate. He travelled in South America and the West Indies and upon returning to the United States, accepted the chair of English Literature  at Poydras College, Pointe-Coupée, La., then a flourishing Creole institution. Hearing of the attack upon the federal troops in Baltimore on 21 April, 1861, in which a classmate had been wounded, his Southern sympathies were so aroused that during the night by the light of a candle he composed what is generally acknowledged to be America’s most martial poem, which first appeared in the New Orleans “Sunday Delta” of 26 April, 1861. Reaching Baltimore, it was set to the music of “Lauriger Horatius” by Miss Jennie Cary, who added “My Maryland” to each stanza. A German musician of Southern sympathies eventually set the poem to “Tannenbaum, O Tannenbaum”, the original of “Lauriger Horatius”. After the close of the war, Randall engaged in newspaper work, holding several important editorial positions, eventually becoming Washington correspondent for the Augusta “Chronicle”. He was the author of numerous other poems, none of which, however, attained the popularity of “Maryland, my Maryland”. His later work breathed a deeply religious tone.

NOTE: Catholics made great, if overlooked, contributions to Civil War music on both sides. “Dixie” was the work of Dan Emmett, a Catholic. The music to the Confederate anthem “The Bonnie Blue Flag” was done by Harry McCarthy, a cradle Catholic, and the words by Anne Chambers Ketcham, a convert who became a Third Order Dominican. In the North, Patrick Sarsfield Gilmore composed “When Johnny Comes Marching Home.”

June 1, 2013 General James Shields: Immigrant, Soldier, Senator from Three States
Recent Comments
0 | Leave a Comment
"Wow! I didn't know about that Statement from the US Bishops. The fact that they ..."
Florence Ziegler “It’s About Time They Got Here”:  Catholics ..."
"Very interesting. Why did the Jesuits change the name of the school from a saint's ..."
Kristin Nealon Wilson Ocds Who’s Buried in Catholic Cemeteries?
"It is a joy to that you are back blogging. Thanks for the reference to ..."
Joe A Church Historian’s First Communion
"Thank you for all your enjoyable, informative posts on Church history. I agree that the ..."
Kathleen Brady Looking at the Scandals– A Church ..."
Browse Our Archives
get the latest from
Catholic
Sign up for our newsletter
POPULAR AT PATHEOS Catholic
1