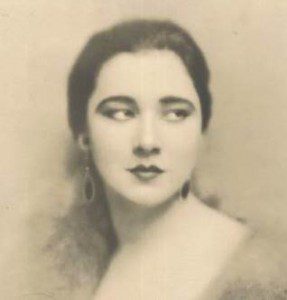 Nita Naldi was born Mary Nonna Dooley on East 114th Street in Harlem in what was then a largely Irish neighborhood. She was named for her great-aunt, Sister Mary Nonna Dunphy, foundress and Mother Superior of Holy Angels Academy in Fort Lee, New Jersey. Her parents were both of Irish ancestry, Patrick and Julia Cronin Dooley. Patrick left the family when Mary was young, but she boarded at Holy Angels.  Forced to support her siblings after her mother died in 1915, she went to work in vaudeville. (She took the name Nita Naldi from a friend, Maria Naldi.) She started on Broadway as a chorus girl in The Passing Show of 1918. After small roles in films, she starred alongside the likes of Valentino and John Barrymore, working with directors like Cecil B. DeMille and Alfred Hitchcock. Her usual role was that of the “vamp,” the femme fatale. Films included Dr. Jekyll and Mr. Hyde (1920), Blood and Sand (1922) and The Ten Commandments (1923). Her film career ended with the arrival of sound, but she did some theater and lived in New York City, where she died on February 17, 1961. She is buried in Calvary Cemetery in Queens.

June 4, 2013 Catholics in the Movies: King Baggot (1879-1948)
Recent Comments
0 | Leave a Comment
Browse Our Archives
get the latest from
McNamara's Blog
Sign up for our newsletter
POPULAR AT PATHEOS Catholic
1

St. Maximos, The Will, And Universal...
A Little Bit of Nothing
Related posts from McNamara's Blog