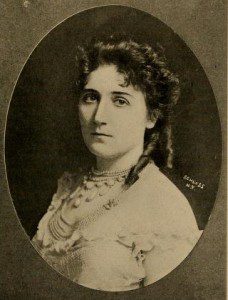 This popular favorite has made herself a prominent place among the actresses whose forte is found in emotional roles. She was born in New York, January 4, 1873, and is the daughter of Thomas and Minnie Savorie Walsh. Miss Walsh made her debut on the professional stage at the age of sixteen, with Marie Wainwright, as Olivia in “Twelfth Night.” She remained with Miss Wainwright for three seasons, and then joined Mr. Chas. Frohman, and created the part of Diana Stockton in Mr. Bronson Howard’s “Aristocracy,” produced at Palmer’s Theatre, New York City, September, 1892 ; she played in this two seasons and then played Kate Kennion in “The Girl I Left Behind Me,” and on January 1st, 1895, Miss Walsh joined Nat. C. Goodwin, playing Margaret, in “A Gilded Fool;” Kate, in “Mizzouri;” Ada Ingot, in “David Garick”; Annie Harrington, in “The Nominee;” the Hon. Mrs. Meredith, in “The Gold Mine;” and Mrs. Major Phobbs, in ” Lend Me Five Shillings.” Then came.a season of summer stock in Washington, after which she went under the management of A. M. Palmer and created the part of the adventuress, Mrs. Bulford, in “The Great Diamond Robbery.” She later assumed the part of “Trilby,” and then rejoined Mr. Goodwin, sailing with him to Australia, playing all the parts she had previously played in America. Miss Walsh is a remarkably quick study, having on several occasions demonstrated this fact, two of which are worthy of mention; in August, 1895, with only two hours’ notice, and without a rehearsal, Miss Walsh played the role of Trilby in the original company, and won high praise for her successful accomplishment of a difficult task ; again Miss Walsh played Edith Varney, in “Secret Service,” after seeing one production of the play, and having one rehearsal. Miss Walsh has also been in such emotional plays as Fedora, La Tosca, Gismonda, and Cleopatra.