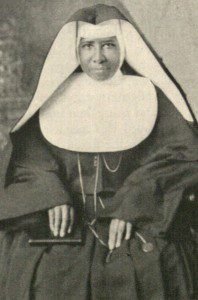 St. Ann’s Academy was founded by Sister Mary Charles Norsette, who was sent from Baltimore with two other Sisters, August, 1892. They were invited by Reverend Father Matthew to help with the colored work in St. Cyprian’s parish. The Sisters were welcomed in Washington by Miss Mary Atkins, who is of an old colored Catholic family and had a sister and niece in the Order. In 1884, Sister Charles built St. Ann’s Academy at 310 Eighth street. During the first few years of their work, the Sisters endured many hardships, for as in all beginnings, they had nothing, but found many kind friends. The ground for St. Ann’s Convent was a gift from Miss Mary Atkins. The building of St. Ann’s Convent was a great undertaking for the Sisters. Long before it was completed, it was observed that Sister Charles’ health was failing — so much so, that one week after its completion and dedication. Mother Theresa called her to the Mother House. Sister Charles lived five months after the convent was completed. She died April 1, 1895. She was succeeded in the work by Sister Mary Bernard Atkins. The Sisters have been very successful with their missions in Washington, both the academy and the parochial school, are under the direction of Reverend Father Matthew of St. Cyprian’s Church. During the struggle to start the school, Providence sent the Sisters a good friend and benefactor in Miss Marie Patterson, formerly of St. Louis, but at that time living in Washington. She was a true friend to the Sisters and became very much interested in the work. She came weekly to the Convent and presided over a sewing class among the children, having provided for each child a thimble, needles, thread and such things as are necessary to teach them the art of sewing. Seeing the Sisters were laboring under a heavy debt, Miss Patterson promised to pay the interest semi-annually, which she did, until the time of her death, which occurred in Paris, France. After the death of Miss Patterson, the Sisters learned, that even though the Atlantic Ocean was between them, she had remembered them by leaving a bequest of five thousand dollars to continue their good work. Of the first little band, the only Sister living is Sister Mary Clementine Hamilton, who is a native of Kentucky, and has been teaching at the parochial school since the mission was first opened. She is very much loved by her pupils and has a wonderful influence over them. Sister- Clementine often speaks with great pleasure of one of her first pupils, who is now a priest, Reverend Joseph A. Burgess, of the Holy Ghost Order in Pennsylvania. The school has grown rapidly and there are eleven Sisters engaged in the work, with 350 pupils in the parochial school and 30 boarders in the academy. The present Superioress of St. Ann’s Academy is Sister Mary Elizabeth Damain, who is a native of Maryland, and has been in the Order twenty-one years. The house in Washington was Sister Elizabeth’s first mission, she has been laboring in the work at the school for a number of years.