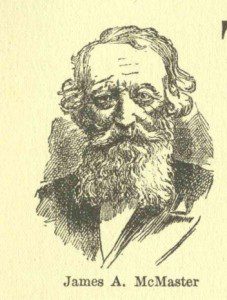 JAMES A. M’MASTER DEAD. CAREER OF THE NOTED CATHOLIC EDITOR CLOSED. THE MAN WHO FOR MANY YEARS FOUGHT, IN THE “FREEMAN’S JOURNAL,” THE BATTLES OF HIS CHURCH. (The New York Times, December 30, 1886)

James A. McMaster, the veteran editor of the Freeman’s Journal, died yesterday morning at 9 0’clock in St. Mary’s General Hospital, at Buffalo and St. Mark’s avenues, Brooklyn. Mr. McMaster had been an inmate of the hospital for the last two weeks. His death was to a complication of disorders, aggravated by a fall received a short time before he entered the hospital. His son Alphonsus, Dr. Byrne, the visiting physician of St. Mary’s Hospital, Fathers O’Boyle and O’Shebee, and several of the Sisters of Charity were with him at the time of his death. The arrangements for the funeral have not yet been completed.

James A. McMaster was born in Duanesburg, N.Y., April 1, 1820. He came of Scotch ancestry, and his family came into this State by way of Vermont. His father, the Rev. Gilbert McMaster, was a rigid Presbyterian clergyman. There being meager opportunities for his education elsewhere, it was conducted at home, his father acting as instructor. As the elder McMaster was a devoted student of the classics, the younger was reading Latin and Greek when were conversant with words of no more than two syllables in their own speech. In his seventeenth year he entered the Sophomore class of Union College. On leaving college, in his twentieth year, he began the study of the law, but did not long retain his interest in it.

He turned to theology and began to prepare himself at the Protestant Epsicopal Theological Seminary in this city for the ministry. The religious agitation of which Newman and Manning were factors in England had spread to New York, and had affected the minds of a number of the seminarians. High Church ideas had come into vogue, and were being carried to their extreme by such devotees as Arthur Carey and Clarence Walworth, a son of the Chancellor. Young McMaster fell under their influence and followed in their course. Arthur Carey was prepared for ordination at this time, but his views had caused the church authorities to hesitate about admitting him to the priesthood. And while this hesitancy was soon justified when Carey and Walworth soon afterward went out of the pale of the Episcopal Church and into that of the Roman Catholic, quickly followed by McMaster. All these journeyed to Trond, in Belgium, where they entered the Redemptorist novitiate. McMaster remained there only about a year. His desire for discipline and study could not overcome the disputatiousness of his race and blood. The life of a religieux was not his vocation. He was better fitted for the church militant. Prompted by his own inclination, as well as by the advice of his superiors, he left the Redemptorist novitiate and returned to this city.

Religious bigotry was then prevalent. Native Americanism was rampant. Broken heads were not uncommon at church doors, and the figure of a convert to Roman Catholicism was peculiarly inviting to attacks from objectors to his creed. This was a condition of affairs that stirred all the faculties of McMaster. He went into the fray eagerly, and soon showed extraordinary polemical skill in articles written by him for the Freeman’s Journal. These attracted the attention of Archbishop Hughes, who was glad to find and encourage a layman so able and so earnest in the maintenance of his church against all assailants. So Mr. McMaster succeeded to the editorship of the Freeman’s Journal and became the valued assistant of the Archbishop in his sturdy battling for what he believed the rights of Catholics in a free land. Like the Archbishop, he was aggressive. He had bold things to say and he said them without fear. He shrank from no adversary. He became the target of every opponent of his church, but he returned every shot they fired at him. His reputation spread until he was regarded throughout the land as chief in what thousands of good citizens thought was a bold scheme to make Rome the director of the United States.

When Archbishop Hughes brought up the public school question it was McMaster who lent his strongest aid in support of the theory that Catholics should not be taxed for maintenance of places of instruction to which they could not conscientiously send their children, because the articles of their faith were not taught in them. His earnest advocacy of a theory so unpopular made him the most assailed man in the United States, excepting his patron. The elder [James Gordon] Bennett, for whose lack of heartiness in support of the faith in which he was born in the land whence his own ancestors had come, McMaster felt scorn and contempt, and to whose jibes or sneers of delicate side thrusts he always gave a vigorous response, about this time, in a period of playfulness, dubbed him “the Abbé.” The title became fixed. For more than 30 years James McMaster has been out of public sight, and the Abbé McMaster has stood for him.

Even the strong personality of John Hughes was not sufficient to make that of McMaster subject altogether. He made excursions into politics and delivered himself in a ponderous way of doubtful religious doctrine, until at last the Archbishop was compelled to discard the Freeman’s Journal as organ and to accept it only occasionally as a mouthpiece. In politics McMaster was a States Rights Democrat. The Wilmot Proviso was not to his liking. He thought that slaveholders’ rights of property should be coextensive with the Nation. For weak Buchanan he had a hearty contempt. Stephen A. Douglas was his hero. Yet when the war broke out he parted company with Douglas and became a fierce advocate of the South. By his bitter attacks on the Government he went far to overcome in the minds of many Union men patriotically afraid of the advances of the Catholic Church the good impression produced on them by the ardent support given it by Archbishop Hughes. It became evident that the Abbé McMaster needed to be disciplined for political heresy. By President Lincoln’s order he was put into Fort Lafayette and kept there for about eleven months, during which the Freeman’s Journal  was not published. Since the war he has not been as prominent as before, yet he has retained a wonderful amount of influence among Catholics, to the poorer educated of whom his ex cathedra  way of writing made him seem the embodiment of learning in theology. With the authorities of the church he has not been in good odor because of its bold way of expounding its laws and because of his somewhat ill-tempered treatment of even the highest among them at times.

Mr. McMaster was a commanding figure on the street as well as in religious journalism. He was more than 6 feet in height, with a big but spare frame, and until within two or three years he walked as firmly and erect as an athlete. He had no fear of any man, and was as willing to dispute in a crowd on matters on which he had conviction as by the medium of his pen. He was social, and accustomed to resort to places where men gather who have opinions to express or who wish to learn the ideas of their fellow-citizens on public topics. In the Astor House he was often to be found in the center of interested auditors. Bad language was his only bane in such a place. He would rebuke its user and leave him. He preached an exalted rule of life and he tried to follow it.

In 1855 Mr. McMaster married a West Virginia lady, by whom he had four children. She died in 1872, and he was always too true to her memory to marry again. Two of his three daughters are inmates of a Carmelite Convent in Baltimore. His oldest daughter is a member of the Society of the Holy Child Jesus, whose house is at Sharon, Penn. His son, Alphonsus McMaster, has assisted his father on the Freeman’s Journal.

June 10, 2014 Catholic History in Less Than Five Minutes-- The Church and the Fall of the Roman Empire (337-476 A.D.)
Recent Comments
0 | Leave a Comment
"Very interesting. Why did the Jesuits change the name of the school from a saint's ..."
Kristin Nealon Wilson Ocds Who’s Buried in Catholic Cemeteries?
"It is a joy to that you are back blogging. Thanks for the reference to ..."
Joe A Church Historian’s First Communion
"Thank you for all your enjoyable, informative posts on Church history. I agree that the ..."
Kathleen Brady Looking at the Scandals– A Church ..."
"Such laws might have done Ireland some good, in the case of the Magdelenes. The ..."
HematitePersuasion “A Million Foreigners, Most of Them ..."
Browse Our Archives
Follow Us!

Love Trumps Surprises
“Is it not a strange fate that we should suffer so...
view all Catholic blogs
What Are Your Thoughts?leave a comment
Copyright 2008-2020, Patheos. All rights reserved.