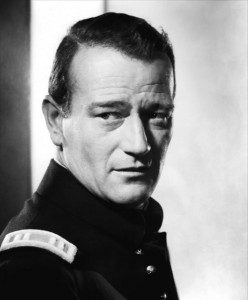 Today marks the 35th anniversary of the passing of actor John Wayne. Born Marion Robert Morrison in Winterset, Iowa, his family moved to California when he was young. After graduating from Glendale High School in 1925, he played football for the University of Southern California until a shoulder injury precluded his sports career. As his latest (and possibly best) biographer Scott Eyman notes, Wayne had already gotten the acting bug, starting off as a prop man and later as an extra on John Ford movies such as Salute (1929), which gave him his first talking role. Another director, Raoul Walsh, noticed the young man and decided he might have the stuff of a movie star. Without any major acting experience, Duke (a childhood nickname) Morrison was renamed John Wayne (for the Revolutionary War general Anthony Wayne), and given the lead in Walsh’s 1930 Western epic The Big Trail. The movie turned out to be a box office flop, and Wayne was relegated to B-Westerns for a decade until John Ford put him in 1939’s Stagecoach, commonly regarded as one of the all-time great Westerns. From there his career took off, and the movie legend we know as “the Duke” was born.

Wayne was raised a Presbyterian (he used to refer to refer to himself as a “Presbygoddamnterian”), but all of his three wives were Catholic, and all of his seven children were raised Catholic. Many of them attended what is now Loyola-Marymount University in Los Angeles. Many of his best friends in the movie business, like John Ford,  were Catholic. Toward the end of his life, shortly before his death, Wayne was received into the Catholic Church. His funeral Mass was celebrated by Timothy Cardinal Manning, the Archbishop of Los Angeles. Wayne’s grandson Matthew Munoz is now a priest in the Diocese of Orange, California.