“The Church Would Look Foolish Without Them”: Dr. John Daniel Sullivan, Our Lady of Victory Church, Bedford-Stuyvesant, Brooklyn 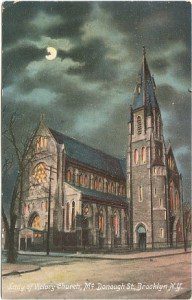 Dr. Sullivan, one of the most successful physicians of Brooklyn, has much natural ability, but is withal a close student and believes thoroughly in the maxim that “there is no excellence without labor.” His devotion to the duties of his profession, therefore, combined with a comprehensive understanding of the science of medicine, has made him a most successful and able practitioner, whose prominence is well deserved.

The Doctor was born in Middletown, New York, September 4, 1841, and is a son of Peter and Julia (Harrington), natives of Ireland, who, on their emigration to America, settled in Maine, and from there moved to Middletown, New York. When the Doctor was seven months old they located on a farm in Bethel, Sullivan County, New York, where the father died. The mother’s death occurred in Brooklyn. Of their nine children, one son and three daughters died in infancy. Those living are: Peter, a grocer of East New York; John D., our subject; Anna, the wife of Martin Ridington, a retired resident of Brooklyn; Julia, now Sister Maria Joseph, of the Order of Sisters of St. Joseph, Brooklyn; and Michael E., also a resident of Brooklyn.

Dr. Sullivan passed his boyhood days upon the farm in Bethel. He was only ten years old when his father died, and from that time until his nineteenth year he worked on the farm during each summer and attended school in winter. He then engaged in teaching, and for the purpose of becoming more proficient in that line attended one course at the State Normal School at Albany, New York, but at the close of the term decided to take up the study of medicine. Going to live with an uncle in Springfield, Massachusetts, he entered the Springfield English and Classical Institute, where he pursued a course of study designed to prepare him for a medical education.

In 1864, he returned to Bethel, New York, and commenced the study of medicine under the preceptorship of Dr. A.A. Gillispie, spending a portion of his time with Dr. William L. Appley, then the principal surgeon in that section of the country. He attended one course of lectures at the department of medicine and surgery at the University of Michigan, and a special course in chemistry in the laboratory of that institution. The next year he matriculated at the University Medical College, New York City, and was graduated with the degree of M.D. in March, 1867. After a competitive examination Dr. Sullivan was appointed on the resident staff of Charity Hospital (now known as the New York City Hospital), serving as such from April, 1867, to April, 1868; was then appointed resident physician to the fever Fever Hospital, New York, until April, 1869; and at the close of that service located in the private practice of medicine in Brooklyn.

All his professional life has been passed in the vicinity of his present home, 74 McDonough Street, which was sparsely settled and had but few doctors when he located there. Within two years he had built up an immense practice, and for many years has been obliged to employ an assistant. He has always been a hard worker, and despite his enormous practice has found time to read and study sufficiently to keep abreast of the times in the theories and practice of medicine and surgery. Dr. Sullivan has been an attending physician to St. John’s Home, an orphan asylum, Brooklyn, since 1870; surgeon to St. Mary’s General Hospital since 1882; surgeon to the department of police since 1887; and medical examiner to the Catholic Benevolent Legion since 1881.

On the 21st of April, 1875, Dr. Sullivan married Miss Ellen Sullivan, of New York City. Of the children born to them the two oldest died in infancy. The others are as follows: Francis Joseph, a student in St. Francis Xavier College, New York; Raymond Peter, a student in Georgetown University, Washington, D.C.; and Eugene Leo, Hester Ellenor, Julia Harrington, Grace Marie and May Irene, all in school. The family are members of Our Lady of Victory Catholic Church, and, although having an extensive practice, the Doctor has always found time to be a strict attendant at Church.

NOTE: Our Lady of Victory Church was founded in 1868 in Brooklyn’s Bedford-Stuyvesant section. Founded to serve a predominantly Irish immigrant congregation, today it serves Catholics of African descent.

June 4, 2014 A Poetic Tribute to the Jesuits
Recent Comments
0 | Leave a Comment
Browse Our Archives
Follow Us!