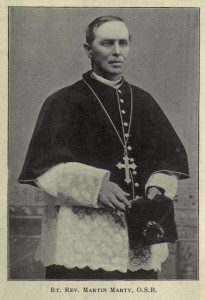 First Vicar Apostolic of Dakota. Martin Marty was born at Schwyz in Switzerland, on the 12th of January 1834, and entering in youth, the great Benedictine abbey of Einsiedlen, made his profession on the 20th of May 1855. The young monk had already pursued his theological studies with such zeal and talent, that the next year he was ordained on the 14th of September.  A colony of monks from Einsiedlen was sent to Indiana in 1854, and founded St. Meinrad’s. Dom Marty arrived in 1860 to share the labors of the sons of St Benedict, and when the priory was established five years later, he was made the first superior. The little community prospered, receiving postulants who persevered and the mission work increasing. Pope Pius IX in 1870 erected St. Meinrad’s into an abbey, constituting the Fathers connected with it into the Helveto-American Congregation, and Right Rev. Martin Marty was made mitred abbot. The cornerstone of a new monastery was laid May 22nd, 1872. Abbot Marty presided for several years, perfecting the institutions under his care and extending the missions, erecting churches and fostering education. But he had always desired to undertake missions among the Indians, and at last he went with some Fathers to Dakota. The work there gave such promising hopes that he resigned his dignity of abbot to devote himself to it. In 1879, the Territory of Dakota was formed into a vicariate apostolic, and confided to the care of the zealous Benedictine who was consecrated Bishop of Tiberias, on the 1st of February, 1880. When Bishop Marty attended the [Third] Plenary Council [of Baltimore] four years later, there were nearly ninety churches and fifty priests in his vicariate, with seven Indian missions attended by his clergy, Benedictine, Ursuline and Presentation nuns, with Sisters of the Holy Cross, and Youville Sisters of Charity, aiding in the good work.

John Gilmary Shea, The Hierarchy of the Catholic Church in the United States (New York: The Office of Catholic Publications, 1886), 396.

June 29, 2014 Who’s Buried in Catholic Cemeteries: Henry King (1886-1982)
Recent Comments
0 | Leave a Comment
"Thank you for all your enjoyable, informative posts on Church history. I agree that the ..."
Kathleen Brady Looking at the Scandals– A Church ..."
"Such laws might have done Ireland some good, in the case of the Magdelenes. The ..."
HematitePersuasion “A Million Foreigners, Most of Them ..."
"sounds like a total waste of time"
kyuss, cannabis farmer Holy Name Rally at Ebbets Field ..."
"This is a marvelous joining of three important Brooklynites who happened to have gone to ..."
Joe Three Giants of Brooklyn Catholicism
Browse Our Archives
Follow Us!

No, God Did Not Send Coronavirus...
On the Catholic Beat
Related posts from McNamara's Blog 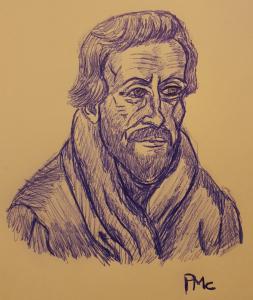 A Letter from the Desert
Pascal once said that most of our problems as human beings stem...
view all Catholic blogs
What Are Your Thoughts?leave a comment
Copyright 2008-2020, Patheos. All rights reserved.