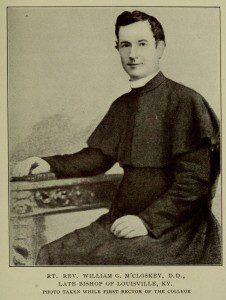 Is it just me, or does Father William George McCloskey look suspiciously like Stephen Colbert?

Born in Brooklyn, McCloskey was a cousin of John McCloskey, who in 1875 became the first American Cardinal. After studying at Mount St. Mary’s Seminary, Emmitsburg, Maryland, he was ordained a priest in 1850. After teaching at his alma mater, he was named first Rector of the North American College in Rome, the prestigious seminary where American bishops send their best students. After nine years, in 1868 Father McCloskey was named Bishop of Louisville, Kentucky, a position he held for forty-one years.The Catholic Encyclopedia writes of McCloskey:

He had a splendid physique and was a man of talent and cultured taste. He had a strong will, and held tenaciously to any view or plan of action that he had once entered on. Of strong Christian faith, of exemplary priestly life, he was especially charitable to the very poor and to the unfortunate classes of society. He will never be forgotten by the unfortunate magdalens of the House of the Good Shepherd at Louisville. Every Sunday, unless stormy weather prevented, he visited, instructed and consoled them, listening to each one’s tale of woe and showing to this class that charity of which Christ set the Divine example. He wrote a life of St. Mary Magdalen (Louisville, 1900). His love for the poor, whom he visited in their homes even in his old age, and to whom he gave whatever money he owned, so that he died a poor man, illuminated the city in which he wielded the crosier with force and mercy for almost half a century. He was beloved by all who knew him.

June 5, 2014 Catholic History in Less Than 5 Minutes-- A New Feature-- The Early Church (30-313 A.D.)
Recent Comments
0 | Leave a Comment
"Thank you for all your enjoyable, informative posts on Church history. I agree that the ..."
Kathleen Brady Looking at the Scandals– A Church ..."
"Such laws might have done Ireland some good, in the case of the Magdelenes. The ..."
HematitePersuasion “A Million Foreigners, Most of Them ..."
"sounds like a total waste of time"
kyuss, cannabis farmer Holy Name Rally at Ebbets Field ..."
"This is a marvelous joining of three important Brooklynites who happened to have gone to ..."
Joe Three Giants of Brooklyn Catholicism
Browse Our Archives
Follow Us!