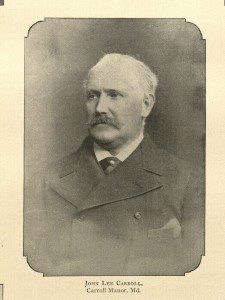 Born in Baltimore, John Lee Carroll was the great-great-grandson of Charles Carroll (1737-1832), the sole Catholic signatory of the Declaration of Independence.  His great-grandfather  Thomas Sim Lee (1745-1819) was Governor of Maryland (1779-1783, 1792-1794). John Lee Carroll studied at Mount Saint Mary’s University in Emmitsburg, Maryland, and Georgetown University. He later studied law at Harvard University. After many years practicing law, Carroll was elected to the Maryland State Senate in 1867. In 1875,he ran for Governor on the Democratic ticket, winning by a margin of 10,000. He served until 1880, when he went back to practicing law. Carroll died in Washington, D.C.,  February 27, 1911, and is buried in the New Cathedral Cemetery, Baltimore.

August 17, 2014 Who's Buried in Catholic Cemeteries: Mayor Hugh J. Grant (1858-1910)
Recent Comments
0 | Leave a Comment
"Wow! I didn't know about that Statement from the US Bishops. The fact that they ..."
Florence Ziegler “It’s About Time They Got Here”:  Catholics ..."
"Very interesting. Why did the Jesuits change the name of the school from a saint's ..."
Kristin Nealon Wilson Ocds Who’s Buried in Catholic Cemeteries?
"It is a joy to that you are back blogging. Thanks for the reference to ..."
Joe A Church Historian’s First Communion
"Thank you for all your enjoyable, informative posts on Church history. I agree that the ..."
Kathleen Brady Looking at the Scandals– A Church ..."
Browse Our Archives
Follow Us! 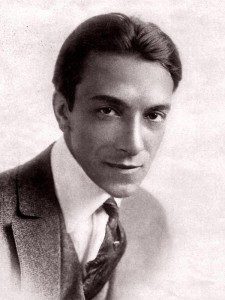