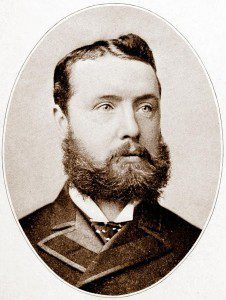 Born in New York City on September 10, 1858, Hugh J. Grant grew up in Manhattan, where he attended Manhattan College (then located in Manhattanville) before studying abroad. Upon his return he studied at Columbia Law School. An active Democrat. he soon got into politics, running unsuccessfully for Mayor at age 27. He did serve as the 88th Mayor of New York City from 1889 to 1892, as one of the nation’s youngest mayors and one of the city’s first Catholic mayors. After leaving the mayor’s office, Grant went into business and was quite successful. Grant died of a heart attack on November 3, 1910. His funeral Mass was at St. Ignatius Loyola Church on Park Avenue and he was buried in Calvary Cemetery, Queens. The Grant home later became the residence of the Vatican’s Permanent Observer to the United Nations. In 1914, his widow  Julia Grant provided a financial bequest, originally anonymous, that provided the funds for establishing Regis High School, a Jesuit high school in New York City that, following her instructions, provides a free education for Catholic boys with special consideration given to those who can not afford a Catholic education. Regis today is one of the country’s leading high schools.

September 16, 2014 "New York Catholics" Now Available on Amazon!
Recent Comments
0 | Leave a Comment
"Wow! I didn't know about that Statement from the US Bishops. The fact that they ..."
Florence Ziegler “It’s About Time They Got Here”:  Catholics ..."
"Very interesting. Why did the Jesuits change the name of the school from a saint's ..."
Kristin Nealon Wilson Ocds Who’s Buried in Catholic Cemeteries?
"It is a joy to that you are back blogging. Thanks for the reference to ..."
Joe A Church Historian’s First Communion
"Thank you for all your enjoyable, informative posts on Church history. I agree that the ..."
Kathleen Brady Looking at the Scandals– A Church ..."
Browse Our Archives
get the latest from
McNamara's Blog
Sign up for our newsletter
POPULAR AT PATHEOS Catholic
1

More Important than Belief in the...
Messy Inspirations
Related posts from McNamara's Blog