On the eve of  All Hallows (All Saints), it seems appropriate to focus on a seminary named for that day. From 1840 through the 1980’s, All Hallows College sent some 5,000 Irish priests out to the English-speaking world. Today it is a college of Dublin City University. The following is taken from the 1911 Catholic Encyclopedia:

An institution devoted to the preparation of priests for the missions in English-speaking countries. In the year 1840 a young priest, the Reverend John Hand (1807-1846), who lived with a Vincentian community in Dublin without being bound by their rules, began to take a deep interest in the evangelization of his countrymen in English-speaking lands; and recognizing the homesteads of Catholic Ireland as excellent seed-beds of apostolic workmen—as, in a very true sense, petits séminaires (“little seminaries”)— he determined to consecrate his life to the foundation of a college destined exclusively for the education and equipment of missionaries.

Such a project in the hands of one so young, unknown and penniless, seemed chimerical; but Father Hand placed his trust in Heaven and in the traditional generosity of the Irish race. His first step was to go to Rome. There he received from Gregory XVI a Rescript expressing the “fullest approbation of so holy an undertaking”. Upon his return, aided by O’Connell, he obtained from the Corporation of Dublin a lease of a stately mansion on the north side of the city, and with it twenty-six acres of land which in the pre-Reformation days had belonged to the Priory of All Hallows (All Saints).

On the first day of November, 1842, with the advice and encouragement of the venerable Archbishop Murray, he formally opened the college and bestowed upon it its present appropriate name. For four years he continued President, directing the studies, establishing the finances, and organizing the professional staff. Then, worn out by solicitudes and labours, especially by the weary work of collecting funds from house to house in the city, and from parish to parish in the country, he died in the spring of 1846, leaving to others the legacy of an ample harvest.

A lofty and Celtic ideal had attracted and stimulated Father Hand. He desired All Hallows “to be Apostolic, and to cease to exist, as soon as it ceased to be Apostolic.” He wished the professors to labour without stipend, and the students not only to be taught and boarded, but to receive every collegiate convenience, free of charge. The professors of the college throughout its history have been men of capacity and distinction, and men whose lives were according to Father Hand’s desire, modelled upon the teaching and the example of M. Olier and St. Vincent de Paul.

Amongst those who gratuitously gave their services to All Hallows the following deserve special mention: Dr. Bartholomew Woodlock, Dr. Daniel Moriarty, Dr. Michael Flannery, Dr. Eugene O’Connell, Dr. George Conroy, Dr. James McDevitt, and Dr. Patrick Delany (Hobart), all of whom were elevated in course of time to episcopal rank. To these should be added Dr. Thomas Bennet, Provincial of the Carmelites; Dr. Sylvester Barry, now Vicar-General of Sandhurst; Monsignor James O’Brien, Rector of St. John’s College in the University of Sydney; Dr. John McDevitt author of the “Life of Father Hand”; Father Thomas Potter, and Mr. Henry Bedford, the last two distinguished converts and men of literary eminence.

It has been the aim of the directors of All Hallows from the beginning to form missionaries of a practical type, men who would throw themselves with sympathy and zeal into the advancing civilization of the New World. In furtherance of this aim the studies, discipline, and general spirit of the college have been developed along certain definite lines.

In an academic course of seven years three are devoted to physics, mental philosophy, languages, and English literature; the remaining four years to Sacred Scripture, history, liturgy, canon law, sacred eloquence, and the science of theology. Throughout the entire period there are classes in elocution and in modern and Gregorian music. Examinations, written and oral, are held twice each year, supplemented by monthly revisions. Prayer, the sacraments, conferences, retreats, and friendly advice are the means used in the formation of character. The students are encouraged to foster and strengthen the spontaneous spirit of piety, which is the heritage of most Irish children.

They are also encouraged to develop health and manliness by outdoor exercises and recreations, such as football, hurling, hockey, handball, tennis, cricket, athletic competitions, and long walks.

In 1892, in accordance with the wishes of the Irish Episcopate, the Vincentian Fathers undertook the direction of the college, receiving at the same time the co-operation of several of the former professors. Two of these — Dr. William Fortune, President for a quarter of a century and Dr. Timothy O’Mahoney, Dean for almost an equal period — fill respectively the senior chairs of moral and dogmatic theology. The entire teaching staff consists of fourteen professors, some of them Vincentians, some secular priests, and some laymen. From twenty to thirty students are ordained priests each year on the feast of St. John the Baptist, and sent to various parts of the English-speaking world.

For instance, last summer (1905) thirteen were ordained for the Australian mission, one for New Zealand, two for South Africa, seven for different dioceses of the United States, three for Canada, and one for England. The diocesan destination of the missionaries varies each decade with the needs and advances of the Church; but, this fact apart, an easy computation shows that, during an existence of upwards of sixty years, All Hallows has sent about fifteen hundred priests to minister to the Irish “of the dispersion” in different parts of the New World.

It is worthy of note that this supply of missionaries has been maintained during a period when Ireland herself possessed few educational opportunities, and while her population, under stress of famine and enforced expatriation, was dwindling from eight millions to half that number. At the present time about five hundred All-Hallows-taught priests, including two archbishops and twelve bishops, are scattered throughout Great Britain, the British Colonies, the United States, and the Argentine Republic.

November 1, 2014 All Saints Day Homily, St. Paul the Apostle, Manhattan, 1913
Recent Comments
0 | Leave a Comment
"Wow! I didn't know about that Statement from the US Bishops. The fact that they ..."
Florence Ziegler “It’s About Time They Got Here”:  Catholics ..."
"Very interesting. Why did the Jesuits change the name of the school from a saint's ..."
Kristin Nealon Wilson Ocds Who’s Buried in Catholic Cemeteries?
"It is a joy to that you are back blogging. Thanks for the reference to ..."
Joe A Church Historian’s First Communion
"Thank you for all your enjoyable, informative posts on Church history. I agree that the ..."
Kathleen Brady Looking at the Scandals– A Church ..."
Browse Our Archives
get the latest from
Catholic
Sign up for our newsletter
POPULAR AT PATHEOS Catholic
1 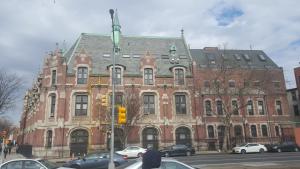 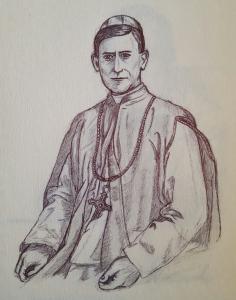