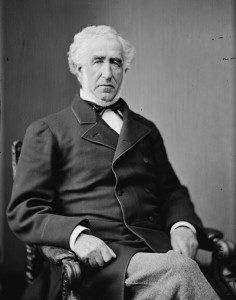 As Americans go to the polls today, we profile the first Catholic to represent New York in the United States Senate. The following is taken from the 1911 Catholic Encyclopedia:

Lawyer, statesman; born in Steuben County, New York, 14 January, 1816; d. at Utica, New York, 7 September, 1892; son of General William Kernan, who came to America from County Cavan, Ireland, in 1800, and of Rose Anna Stubbs, his wife. He attended Georgetown College, D.C., from 1833 to 1836, studied law in Utica, N.Y., in the office of Joshua A. Spencer, and later became his partner. He won fame as an advocate of ability, especially in legal conflict with such leaders of the bar as Denio, Jenkins, Beardsley, Doolittle, Hunt, and Conkling. His rank in his profession was well summed up by Judge Martin Grover, as being without a superior as an all-round lawyer at the bar of New York State. In dress, manner, decision, learning, and unassuming dignity of bearing and geniality, he was a rare type of the best of the old school of lawyers.

Kernan’s political services to his country covered a wide range. He was school commissioner of Utica, manager of the New York State Hospital, official reporter of the Court of Appeals from 1854 to 1857, member of the Constitutional Convention of 1867, regent of the University of the State of New York from 1870 to his death, member of Assembly from 1860 to 1862 , member of the House of Representatives from 1863 to 1865, United States Senator from 1876 to 1882. In all these positions he was conspicuous for ability, fidelity to his convictions, zeal in their advocacy, and fairness as a partisan. As a rule, he spoke extemporaneously, with clearness, vigour, and feeling, and to the point; his speeches were models of clear and convincing statement and analysis. He numbered among his friends Abraham Lincoln, Horatio Seymour, Samuel J. Tilden, Thomas F. Bayard, Grover Cleveland, and other distinguished Americans, and his counsel and advice were often sought by them. Both as a member of the New York Assembly and as a congressman, he was a “War Democrat”. In Congress he rendered important service as a member of the judiciary committee, and was thoroughly in accord with the national government in its efforts to maintain the integrity of the Union. He showed so decided a spirit of justice and moderation that he was often consulted by President Lincoln on matters pertaining to the conduct of the war.

In July, 1876, at the St. Louis convention, Senator Kernan nominated Samuel J. Tilden for the presidency. In the Democratic convention of 1884, held at Chicago, he was not a delegate, but he was present at the special request of the leaders of his party and was one of the most efficient advocates, outside of the convention, for the nomination of Grover Cleveland. In the disastrous Democratic campaign of 1872, he was a candidate for governor against John A. Dix. He was a devout and practical Catholic, frequently assisting at Mass and approaching the sacraments. He represented Georgetown College at the Catholic Congress of laymen at Baltimore in 1889, and delivered a memorable address on that occasion. In charity he gave much, considering his means, as he was never a very wealthy man, to his church and to charitable institutions; and his legal advice was often freely given to the clergy and to his Alma Mater, Georgetown College, which bestowed upon him the degree of Doctor of Laws.

Kernan’s home life was very happy. In 1843 he married Hannah A. Devereux, daughter of Nicholas Devereux, of Utica, who was one of the principal founders and benefactors of the Catholic Church and its charitable institutions in Central and Western New York. He brought up a family of ten children and was a great home-lover, with no fondness for the theatre, opera, or club life. He was fond of reading, of an innocent game of cards, and was a fine conversationalist. Occasionally, but not often, he attended dinners and receptions in Washington and Utica. Duty, not pleasure, was his watchword. He often worked in his home at night over lawsuits and congressional speeches. In person he was tall, had a good figure, and an attractive, intellectual face. Without pretence or sham, he was one of nature’s gentlemen. His old age was calm, genial, peaceful, and contented. He served his country and his Church to the best of his ability and was a shining example of what a Catholic lawyer and statesman should be.

November 5, 2014 Anti-Catholic Cartoon of the Week
Recent Comments
0 | Leave a Comment
"Wow! I didn't know about that Statement from the US Bishops. The fact that they ..."
Florence Ziegler “It’s About Time They Got Here”:  Catholics ..."
"Very interesting. Why did the Jesuits change the name of the school from a saint's ..."
Kristin Nealon Wilson Ocds Who’s Buried in Catholic Cemeteries?
"It is a joy to that you are back blogging. Thanks for the reference to ..."
Joe A Church Historian’s First Communion
"Thank you for all your enjoyable, informative posts on Church history. I agree that the ..."
Kathleen Brady Looking at the Scandals– A Church ..."
Browse Our Archives
get the latest from
Catholic
Sign up for our newsletter
POPULAR AT PATHEOS Catholic
1