From West Point to the Priesthood: Father George Deshon, C.S.P. 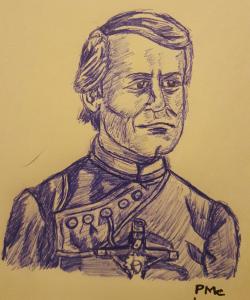 Today marks the passing in 1903 of a seminal figure in early Paulist history, Father George Deshon, C.S.P. (1823-1903). A descendant of Puritan leader William Brewster of  Mayflower fame, Deshon was raised a Congregationalist in New London, Connecticut, before receiving an appointment to the United States Military Academy in at sixteen. His roommate was future general and president Ulysses S. Grant, with whom he kept strong ties throughout his life.

After graduating second in the Class of 1843, Deshon taught mathematics, history, and ethics at the academy. He kept a military bearing throughout his life. Paulist Father Joseph McSorley, who knew Deshon,  writes: “Some who had been his fellow cadets believed that he would have attained distinction in the Civil War had he remained in the army.” While teaching Deshon befriended William S. Rosecrans, another future general, who was instrumental in Deshon’s conversion to Catholicism.

Rosecrans was also teaching at the Point. One day, the two encountered a peddler selling Catholic books. Rosecrans said to Deshon, “Let’s see what these Papists have to say for themselves.” This led to both their conversions, as they read their way into the Church. (Rosecrans’ brother also converted, becoming the first Bishop of Columbus, Ohio, and two of the general’s  children entered religious life. His son Adrian became a Paulist.)

In 1851, Lieutenant Deshon resigned his commission and entered the Redemptorist order. He later said he joined them because he wanted “to preach the Gospel to the people.” If he joined the Jesuits, he felt, he’d be assigned to teach  college again, but he wanted hands-on pastoral work. That work consisted largely of preaching parish missions nationwide. Through this, he met Isaac Hecker, and in 1858 he left the Redemptorists to help form the new Paulist community.

Along with Hecker, the first Paulists were all converts, and they wanted to spread the good news they had experienced in embracing Catholicism. While the Redemptorists were mainly interested in working with German immigrants, the Paulists wanted to expand their mission to non-Catholics, to evangelize America. McSorley writes of Deshon’s Paulist years:

Last survivor of the four founders, Father Deshon spent forty-five years in the Paulist community, laboring in the parish, on the missions, as procurator, as master of novices, as instructor of students, and serving in the office of superior general from his election in 1897 until his death in 1903.

It was Deshon, with his engineer training, who designed the Paulist mother church, St. Paul the Apostle, on Manhattan’s West Side. (A neighboring pastor called it “Deshon’s fortress.”) Father McSorley writes:

Much of his personality went into the great Paulist church in New York City. That church, by the way, is a curiously symbolic edifice, embodying Hecker’s ideas; given shape by Deshon; fitting into no definite architectural category; suggesting Seville to some observers, and Monreale to others; decorated by the great artist, John LaFarge, and revealing Gothic features Romanized, and European plans Americanized; and in many places displaying additions made by Deshon’s protege, the convert artist, William L. Harris.

Described as “a man of few words,” George Deshon was a capable administrator who steered the young community in new directions as they began foundations in Chicago, Tennessee and elsewhere. He kept a military bearing throughout his life. When confined to bed prior to his passing, he replied: “I have to obey orders. I learned that at West Point.”

The Paulist mission continues. Boston Cardinal Richard Cushing once declared that their “influence on the growth of the Catholic Church in America has been far out of proportion to their numerical strength.” In the fields of journalism and evangelization, renewal and reconciliation, they have carved a significant niche in American Catholic history and life. If anything, the Paulist mission has only grown  more important in the years since Vatican II, and especially during the pontificate of Pope Francis. Father Deshon would be proud!

(*The above drawing of Father Deshon is by Pat McNamara.)

December 31, 2018 Looking Back at 2018: Some Anniversary Dates in American Catholic History
Recent Comments
0 | Leave a Comment
"Very interesting. Why did the Jesuits change the name of the school from a saint's ..."
Kristin Nealon Wilson Ocds Who’s Buried in Catholic Cemeteries?
"It is a joy to that you are back blogging. Thanks for the reference to ..."
Joe A Church Historian’s First Communion
"Thank you for all your enjoyable, informative posts on Church history. I agree that the ..."
Kathleen Brady Looking at the Scandals– A Church ..."
"Such laws might have done Ireland some good, in the case of the Magdelenes. The ..."
HematitePersuasion “A Million Foreigners, Most of Them ..."
Browse Our Archives
Follow Us!

If You're Angry About the Looting...
Steel Magnificat
Related posts from McNamara's Blog