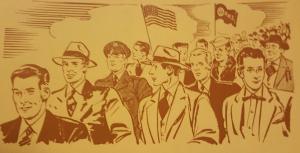 Since the Feast of the Holy Name of Jesus is celebrated as an optional memorial in today’s liturgical calendar, it offers a good opportunity to look at the Holy Name Society and its place in pre-conciliar Catholic life. Founded by the Dominicans in the 1200’s to combat heresy, the society promoted devotion to the Holy Name of Jesus, and to  combat blasphemy and profanity.

For Catholics in the pre-television/pre-Vatican II era, social organizations like the Knights, the Ancient Order of Hibernians, and the National Council of Catholic Women held a prominent place in their lives. For Catholic men, this especially included the Holy Name Society. What Charles Morris writes of Catholic Philadelphia in the 1930’s and 1940’s applies equally to other major urban centers:

The rows of neat brick houses were invariable centered around, and dwarfed by, an imposing cluster of granite buildings– the Catholic church, always of neo-Gothic design, built to the scale of a medium-size cathedral; the parish school, sometimes even a high school; the rectory; the convent; one or more annexes for meeting rooms, overflow classes, perhaps even an auditorium. Few contemporary religions could match Catholicism’s hold on the faithful.

Estimating that Mass attendance “hovered around 90 percent,” Morris argues that the Catholicism of this era was as much a culture as a religion, adding: “It was not uncommon for the majority of adults to belong to parish organizations like the Sodality and the Holy Name Society.” (I still have a copy of my grandfather’s Holy Name manual from 1941.)

The Holy Name Society was introduced to America in the 1870’s by Father Tom Burke, a popular Dominican preacher from Ireland. In Brooklyn and elsewhere, it soon became a mainstay of Catholic life. By the 1890’s, it had 80,000 members across Long Island. Around this time, the first rallies were held in Suffolk. The first Brooklyn rally held at Ebbets Field in 1937 attracted some 60,000 men alone. By the early 1950’s, diocesan-wide rallies were seeing crowds of up to 100,000 Catholic men.

What happened at these rallies? The format was simple enough: a parade and a speaker, all designed to promote Catholic patriotism, unity and manhood. Good Catholic men, it was emphasized, went to Church and supported it financially; they sent their children to Catholic school; they joined parish organizations like the Knights and Holy Name, which aimed to strengthen their faith. In May 1941, a front-page Brooklyn Eagle article described the annual Holy Name rally at Ebbets Field:

With colors flying, bands playing and Irish pipers skirling, 60,000 Brooklyn Catholic men and boys marched in a three-hour parade along Bedford Avenue, which served as a colorful preview to the annual rally of the borough’s Holy Name Societies in Ebbets Field yesterday.

At Ebbets Field, the keynote speaker, Monsignor James Griffiths, spoke on the need for prayer in a time of war. Catholic patriotism was affirmed:  “The ceremonies started with the massing of American flags, papal flags and the individual banners of each of the societies and the singing of the ‘Star-Spangled Banner.’” Then the Holy Name Litany, a lengthy prayer, was read, the Holy Name pledge was recited, and a papal blessing was read. The pledge read:

Blessed be God. Blessed be His Holy Name. Blessed be Jesus Christ true God and true Man. Blessed be the Name of Jesus. I believe O Jesus., that Thou are the Christ, the Son of the Living God. I proclaim my love for the Vicar of Christ on Earth. I believe all the sacred truths which the Holy Catholic Church believes and teaches. I promise to give good example by the regular practice of my faith. In honor of His Divine Name  I pledge myself against perjury, blasphemy, profanity and obscene speech. I pledge my loyalty to the flag of my country, and to the God given principles of freedom, justice and happiness for which it stands. I pledge my support to all lawful authority both civil and religious. I dedicate myself to the honor of the Sacred Name of Jesus Christ and beg that He will keep me faithful to these pledges until Death.

By the 1960’s, the Holy Name rallies had declined in numbers nationwide, but the society is still strong among the City of New York’s uniformed services, especially the Police Department. On this Feast of the Holy Name of Jesus, then, we remember a forgotten aspect of pre-conciliar Catholic life and culture in an attempt to rediscover our Catholic past.

January 2, 2019
"A Shame and a Scandal": Black Catholics Fight Racism
Next Post

January 4, 2019 Newly Made Saints: St. Manuel Gonzalez Garcia (1877-1940)
Recent Comments
0 | Leave a Comment
"Wow! I didn't know about that Statement from the US Bishops. The fact that they ..."
Florence Ziegler “It’s About Time They Got Here”:  Catholics ..."
"Very interesting. Why did the Jesuits change the name of the school from a saint's ..."
Kristin Nealon Wilson Ocds Who’s Buried in Catholic Cemeteries?
"It is a joy to that you are back blogging. Thanks for the reference to ..."
Joe A Church Historian’s First Communion
"Thank you for all your enjoyable, informative posts on Church history. I agree that the ..."
Kathleen Brady Looking at the Scandals– A Church ..."
Browse Our Archives
get the latest from
Catholic
Sign up for our newsletter
POPULAR AT PATHEOS Catholic
1