“Biblical” men don’t date? (A face-palmer from the Council on Biblical Manhood and Womanhood) 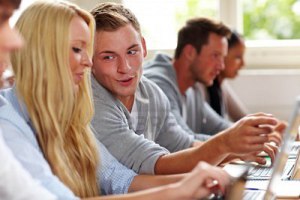 Normally I don’t see much of a point in engaging fundamentalist Christian entities like the Council on Biblical Manhood and Womanhood because I suspect they aren’t particularly relevant to my readership. But a recent post by JD Gunter from CBMW really struck a nerve with me because it so plainly contradicts my experience of dating as a young adult in a way that ironically encourages irresponsible, sinful behavior under the guise of taking yourself very seriously. The only thing missing from Gunter’s post describing why “Biblical” single men shouldn’t stay in un-serious dating relationships with women they aren’t planning to marry is any reference to scripture whatsoever.

Gunter decries the way that young adult and teen couples today seem have a preliminary phase in their relationships together that they call “talking” instead of “dating,” when they’re testing the waters out by spending time together and deciding whether or not to get serious:

This new phase of pre-dating called “talking” is like adolescence for relationships: an unnecessary stage in the relationship allowing young men to avoid taking responsibility and acting like men. It prevents the man from having to be clear about his intentions to pursue or end the relationship. If he wants to stop “talking,” he simply walks away, leaving behind a confused, and potentially wounded, young lady.

First, you should ask girls out that you see as potential wives. Second, when you don’t see her as a potential wife any longer, explain yourself and then stop asking her out. Third, throughout the relationship be clear, upfront, and honest about your intentions.

I’m definitely in agreement about clear communication. But the reason I feel that his first two points are so egregiously wrong and dangerous is because most of the romantic disasters I got into before I met my wife were precisely because I presumed that every girl I dated was supposed to be my future wife. I guess I missed the memo on college “hookup culture,” partly because I was an uber-serious evangelical kid. Whenever I had premarital sex as a young adult, I justified it to myself on the basis of my serious intentions with whatever girl I was in the process of preparing to marry at the time, even if I had two or three potential future wives in the course of a single semester.

That’s why I think it’s a very bad idea to encourage teenagers and young adults who are dating to take themselves too seriously. I was serious with all the sincerity that a somewhat socially delayed evangelical college kid could muster. At every moment of my life, I had to have a potential future wife to pursue. My relationships with women were entirely utilitarianistic and oriented to this purpose. I couldn’t just hang out with women and get to know them. I didn’t know how to joke around or laugh at myself. My entire self-worth was determined by the status of my latest potential future wife project. It was so unhealthy.

I recognize that there are guys out there who play around and get lots of play from the women they play around with. In college and young adulthood, whenever I had to be the platonic BFF of the girls who got hurt by that, man, did I want to beat those guys up! But you can be young and not take yourself too seriously without being a player who behaves abusively towards women and breaks their hearts. That is, if you haven’t been indoctrinated with the ideology that women are an inferior species of human to either be protected or exploited sexually.

There are a lot of broken marriages that have recently emerged in the evangelical subculture as a result of people thinking they were supposed to marry the first person they ever kissed. So guys, please wait until after at least a few dates before you start thinking about the girl you’re “talking to” as a potential future wife. It will save you and her a lot of grief.

September 4, 2013
Is authentic culture possible in an age of mirrors?
Next Post