Breaking a child’s will: the idolatry of obedience

Breaking a child’s will: the idolatry of obedience May 22, 2015 Morgan Guyton

I read a really chilling blog post on Homeschooler’s Anonymous about a disciplinary practice in the far-right homeschooling community I’d never heard of. It’s called “blanket training.” They put their toddlers on small blankets, tell them not to move off, and spank them when they do. Michael and Debi Pearl recommend putting an attractive object close to the blanket to bait the toddler. The idea is to “break their will” from a very early age so that they will do whatever you ask them without arguing the first time you ask them, which is referred to as “first-time obedience.” A number of child abuse cases, including several fatalities, have resulted from monstrous practices like this, which I would consider to be the idolatry of obedience.

When I was a young father, I did a lot of stupid things. One of them was to raise my voice with my first son when I told him to do something. I got a lot of ego satisfaction out of watching him scramble and jump up to obey whatever my command was. It made me feel like a big boss father dude. Now I just have to look at my older son in a certain way and he bristles. It cuts my heart every time I see him tense up in response to me because it makes me wonder how much I’ve damaged him. He tends to be a somewhat timid/agreeable kid who goes along with whatever other people want him to do whether they’re adults or peers. I don’t know how much of that is my fault and how much of it is his natural personality.

My younger son has the opposite personality. He’s very assertive and demanding. He has no problem flopping in the middle of a grocery store and making a scene, even at age 6. He talks smack to me all the time. Sometimes he’ll run up and head-butt me if he’s mad. I used to spank him if he was doing something dangerous or egregiously defiant or physically violent to his brother or mother. But I hated it and I never felt like it really did anything to change his behavior.

I haven’t spanked my younger son in over a year, but because he remembers it, I can use the threat of it as a negotiating tactic, which has proved to be helpful in impossible situations even if it’s wrong. My relationship with him is continuous negotiation with carrots and sticks. When he gets angry, he seems to need to release his anger physically, so I try to give structure to it. Sometimes we wrestle. Sometimes I’ll actually hold out my hand and tell him to punch it as hard as he can. Sometimes we have tickle wars. Sometimes I just hold him tight and tell him to take a deep breathe and close his eyes while I count down slowly from 30.

One thing I know is that my younger son will never do what I tell him to do the first time I ask if he doesn’t want to. I often have to trick him into wanting to do it. If it’s time to leave our favorite amusement park, it’s a lot easier to get him to leave by saying I’ll race you to the car than to threaten consequences or get physical with him. I really don’t think that his strong will is something I could have broken by spanking him more than I did. Even though his stubbornness is super-aggravating at times, I love his personality. I hope that I can help him turn his fierce independence into an asset for God’s kingdom just as my older son’s more accommodating personality can be an asset too.

I question the idea of seeking my children’s obedience for obedience’s sake. Because obeying God is nothing like obeying a larger human being out of fear of their violence against you. Even though fundamentalists like to imagine God as a hard-core bad-ass who smites those who talk back to him, that’s just not how God operates, at least not in a scientific world where we no longer view hurricanes, earthquakes, and invading armies as expressions of God’s wrath. To obey God requires the capacity to hear the still, small voice of the Holy Spirit over louder, more demanding voices in your life.

In a chapter of my book, I compare two characters with radically contrasting models of obedience, the Nazi bureaucrat Adolf Eichmann and Mark Twain’s rebellious teenage character Huckleberry Finn. Adolf Eichmann was perfectly obedient to the orders of his superiors. He organized the logistics of the Holocaust very efficiently. When the Jewish philosopher Hannah Arendt observed his war crimes tribunal in Jerusalem, she was struck by what an incredibly polite and docile man he was. There was no evidence from his personality that he had played a critical role in the murder of millions of people. It was all a complete abstraction to him. He even expressed regret about what happened and explained that he had to follow his orders for the safety of his family. How many of us today would actually be willing to risk the death of our families by disobeying a fascist bureaucracy?

Huckleberry Finn was a rebel, but his rebellion illustrated a different kind of obedience. He literally thought he was going to hell for helping the runaway slave Jim. At one point in the story, Huck writes a letter to Jim’s owner Miss Watson, apologizing for his wicked deed and promising to return Jim to her. But then his mind is flooded with all the memories of his love for Jim. And he can’t do it. So he tears up the letter and decides that he’ll just go to hell rather than abandon his friend. This is what obedience to God looks like. Not cowering in submission to the loudest voice in the room. But having a heart that is tuned in to the voice of God’s love and the courage to obey it even if people around you condemn you to hell.

So it turns out that the teaching I need to provide my sons is a lot more challenging than simply breaking their wills so they do exactly what I tell them the first time I ask. They need to learn how to listen to God. They need to learn the joy of serving others. They need to learn how to stand up for what’s right when the loudest voices in the room demanding their obedience are wrong. If this were all up to me and my own resources, I would be completely screwed. But there’s a still, small voice in the room quietly teaching me how to be a better daddy. If I can actually carve out enough time to listen to that voice amidst all the louder, more authoritative voices in my head, then I think I’ll be okay and my sons will be okay too. 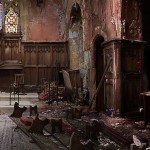 May 19, 2015
Real evangelicals don't gloat about church decline
Next Post

June 3, 2015 What Russell Moore gets right about transgender and intersex identity
Recent Comments
22 Comments | Leave a Comment
Browse Our Archives
get the latest updates from
Mercy Not Sacrifice
and the Patheos
Progressive Christian
Channel
POPULAR AT PATHEOS Progressive Christian
1