The woman with the orthopedic shoes at my Monday mass

For two and a half years, I spent my Mondays at the Basilica of the National Shrine of the Immaculate Conception in Washington, DC, where I would attend the 12:10 mass in the crypt. This Monday, because we’re in town for a campus ministry conference, I had the distinct joy of coming back to mass after more than a year away. It may be bizarre for a Protestant to say this, but I felt like I was “back at home” to be attending a mass that was my centering spiritual practice of each week. I saw several familiar faces, including a woman with orthopedic shoes who has every bit as important a role in that mass as the priest himself.

It’s very weird that I felt so intimate worshiping with strangers in a space where I was a closet Protestant.

There’s one woman whose hair is sort of accidentally dread-locked together and drapes down almost to the floor. She always wears a large coat even in the middle of summer. She’s not homeless. At least I don’t think so because she always has her son (or younger male companion) with her and they always eat soup together in the refectory afterwards.

There’s the man whom I’ve often thought I recognized from my activist days in DC 15 years ago. He has a bald comb-over that’s always been a little bit unkempt along with a scraggly beard. Something about the way he carries himself makes me think Catholic Worker. He doesn’t wear the official habit of a monastic order but he has a lot of beads around his belt. He kneels on the marble floor every time he receives communion. He has a loud, scratchy voice that always stands out above the others when we’re saying our responses.

There’s the Asian woman who leads the Angelus chant before the mass begins. She wears a white veil but no habit or anything. I can only understand her words when she starts the Lord’s Prayer portion of the chant. For every other part of the prayer, her accent is too thick. I try to sit as far away from her as possible, because she assigns people to take the sacramental elements up to the front and hand them to the priest. For some reason, I’m scared to death of doing that as a Protestant because I’m sure there’s some secret handshake you’re supposed to perform when you get to the front.

I was disappointed that the loud soprano who used to sit in my row wasn’t there this Monday. She was studying theology at Catholic University. She’s the only person I’ve actually had a conversation with. It only happened once. I told her she should be a cantor. Every time I saw her after that conversation, we smiled at each other like we were old friends. It often made me wonder how much you really have to say to other people before you can consider them to be old friends if you celebrate mass with them every week. It doesn’t matter that I don’t know her name. I really did miss her on Monday.

I also missed the rector. He has a booming baritone voice, kind of like a white version of Barack Obama, but he sings so much better. I often hear his voice echoing in my head, singing the refrain, “Through him and with him and in him, in the unity of the Holy Spirit, all glory and honor is yours, almighty Father, forever and ever.” It really is one of the loveliest sounds I’ve ever heard in that richly acoustically resonant space. The assistant rector who was there this Monday also has a melodic voice, but he rushes the liturgy too much. He doesn’t have the same measure of patient authority as he chants.

But the most important person in the mass was there. She’s a woman who wears so much makeup on her face that it’s impossible to tell if she’s an old 30 or a young 70. She always has on a very conservative-looking dress that goes about halfway down her calves. And it’s always a little bit shocking to see that she’s wearing off-white orthopedic shoes (I think that’s what they’re called). She always has her missal book out. At several points when there are pauses in the liturgy, she goes to two of the shrines in the crypt to kneel and say prayers. She has never shaken my hand during the passing of the peace even when I’m sitting right behind her. She always does a hurried little wave.

Something about her grave seriousness used to make me thinking she was either in mourning or suffering from some kind of mental illness. But more recently, I’ve felt embarrassed for thinking that. Because our thoroughly secularized age makes any degree of religiosity look like mental illness. She is one of the main reasons that I experience the holiness of God in that room. Watching her kneel and say her prayers. Watching the way that her trembling fingers turn the page of her missal. I imagine there are others like her that sit in other sections of the room. But she is the one whom God assigned to me to show me how to revere sacred ground. It’s because of her that I’m convinced that churches need to be temples rather than programs.

It’s possible that she only comes to mass on Mondays like I used to do. But I like to imagine that she comes and makes the room holy every day at noon. What if our Protestant churches had women in orthopedic shoes who would come to our sanctuaries every day to pray? The rooms that we worship in are barely non-secular spaces. They’re rooms in which we make announcements and plead for volunteers and stewardship pledges. They’re not tabernacles that resonate with the echoes of “Through him and with him and in him.” Nobody kneels desperately at our altars. We don’t even have kneelers (well, United Methodists don’t). Even without kneelers and melodically chanting priests, our sanctuaries would be so different if people actually treated them as holy ground.

Whenever I get back into parish ministry, one of my top priorities will be to find a woman with orthopedic shoes (or without) to come and revere the presence of God in our sanctuary every day. I will ask her to make that her only ministry if she’s willing. Yes, all of our church programs for saving the world with canned food drives and stuffed animals are important. But we need the foundation of prayer and not just the “Jeezuswejuss” kind of prayers. We need people who crave holy ground and whose acts of devotion God can use to make any room into a royal temple.

July 7, 2015
Six scriptures I would use to address Kevin DeYoung's 40 questions for rainbow flag-waving Christians
Next Post 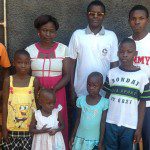