History or Not? Discrepancies in Jesus’ Birth Stories

History?—Discrepancies and contradictions preclude treating either Matthew 1—2 or Luke 1—2 as historically accurate in every detail.

History and fact, exact and precise in every detail? Or just a pure fable? Americans have a hard time finding a middle ground between these two extremes. The Gospels are neither.

In our last post we saw that the two birth accounts are very different and beyond reasonable harmonization. So many events and things mentioned by one of these Gospels is completely missing in the other! The types of events described in one Gospel are impossible to reasonably reconcile with the other. So, some Christians, hell-bent on treating “Matthew” and “Luke” as historically precise and perfectly accurate documents, grasp at remote possibilities. What if one of the two Gospels was an historical account, and the other, a symbolic story?

One History, the Other Symbolic

Many Christians who desperately go this route favor “Luke” as offering the “straight” historical account. After all, they imagine this author as the greatest historian and biographer from apostolic times, who painstakingly and scientifically researched all the data. Many Catholics also favor Lukan historicity because without Luke 1—2 we would not have the Joyous Mysteries of the Rosary! Unlike the other Synoptic Gospels, “Luke” highlights Mary, offering the seeds of later Mariology. From this, some speculate that she had to be the source of Luke 1—2.

There is a human tendency to respond to difficulties by make-believing no difficulty exists. It’s like when a geometry quiz asks “find x” for a triangle and the student simply circles the “x” in the typed question and writes, “here it is!” Or when the history professor asks, “What followed 1945?” and a student, disregarding the context, answers, “1946.” The swiftest (and laziest) way to overcome problems is to pretend there is no problem!

Discrepancies in the History

Keep in mind that we are not only dealing with story differences between “Matthew” and “Luke”—the different stories also present discrepancies. From what we explored last time, we can ask was it Bethlehem (“Matthew”) or Nazareth (“Luke”) that was the hometown of Mary and Joseph? And while both Gospels agree that Jesus was born in Bethlehem, exactly how long after Jesus’ birth did the Holy Family stay there? Was it brief, maybe just over forty days (“Luke”)? Or was it longer, about two years (“Matthew”)?

And when in “Luke” would there be time enough for a trip into Egypt fleeing the Herods? If we follow “Luke” then the Holy Family, between Jesus’ birth and the purification rites, the window is less than two months!

Did the Holy Family go from Bethlehem to Jerusalem and then straight back to Nazareth, as “Luke” tells us? Or did they reside in Bethlehem, give birth to Jesus there, live about two years there until the magi come, then flee to Egypt, then some years after go to a place they’ve never been to before and take up residence there, as “Matthew” says?

Notice that when Joseph discovers that Herod the Great is dead, he fears returning to Judea (where Bethlehem is) because of Herod’s son, Archelaus. But if Joseph were a Galilean from Nazareth, with a home there, why would he even think about going back to Judea? But there’s the rub: in “Matthew” Joseph and Mary are from Bethlehem in Judea, not Nazareth. This disagreement with “Luke” defies reasonable reconciliation.

Dealing with Discrepancies of History

How do fundamentalist Catholics and other Christians deal with these discrepancies between the two Infancy Narratives? Again, some favor the hypothesis that Luke 1—2 is a historically precise account, whereas Matthew 1—2 is a work of deep symbolism. But scholars such as Raymond E. Brown rejected such overly simplistic “solutions.” The reason was because events described by both “Matthew” and “Luke” cannot be reconciled with history outside the New Testament. Both authors list events that, had they actually happened, could not have escaped public record.

Inaccuracies in the Sky Phenomena and History

“Matthew” describes a comet rising in the east, heading westward across the sky vault. By it the magi are led to Jerusalem, and then to nearby Bethlehem, right to the very birthplace of Jesus (Matthew 2:2, 9).

Ancient Mediterranean and Middle Easterners knew the sky very well, without television to distract them and light pollution to rob them of it. Any changes or anomalies to the sky were dutifully recorded and heavily commented on. We have many astronomic reports and sky lore from the time around Jesus’ birth mentioning comets, planetary conjunctions, and supernovae. Scholar Raymond E. Brown, in his Birth of the Messiah, examines all of these. Besides “Matthew” no report exists of such sky phenomena or related events.

Erroneous History about a Census

A similar situation exists with the Lukan census of the whole world when Quirinius was governor of Syria (Luke 2:1–2). This census was presumably made when Herod the Great reigned over Judea (1:5), and who was alive when Jesus was born and for some time after.

Copious records exist from the time of Caesar Augustus’ reign (27 BCE—14 CE). These records describe many events during that reign, particularly the most important. None of them mention anything about a worldwide census. And consider how “Luke” describes this census: people must return to the home of their ancestors. Consider what the Empire would look like in order to accomplish that—throngs of millions migrating all over for the census. And yet all historical records remain silent on it? In his own history, Augustus himself fails to mention this achievement! That’s simply not credible.

Now consider the problem about when this census exactly took place. We know from Josephus, Tacitus, and several inscriptions that there indeed was a governor of Syria named Quirinius. This much agrees with “Luke.” But whereas “Luke” presents Quirinius as governing Syria during Herod the Great’s reign, all other sources tell us that his governorship didn’t begin until a decade following Herod’s death! So much for “Luke” being “the historically accurate account.”

Again in Birth of the Messiah, Raymond E. Brown shows that Governor Quirinius did give a census. It was about ten years after Herod’s death and covered only Judea, not the Galilee (and therefore not Nazareth). What’s more, we can presume that this census was given after the birth of Jesus.

Given all that, do you really think it’s a safe bet to hold that either of these Gospel Infancy Narratives is historically accurate on public events?

The Meaning of Jesus

What’s going on with these stories? Could it be that after the resurrection, sometime years and years after, followers of Jesus began thinking about his birth? Maybe the birth of Jesus got associated with loose memories of events and memorable phenomena that happened plus or minus ten years around his birth? And again, these stories are more concerned with the meaning of Jesus rather than biographical details and precision.

Whether historical or not, one should expect internal consistency from these Gospels, no? Raymond E. Brown says that we ought to expect that what the infancy narrative says agrees in content with the remainder of the Gospel. So Matthew 1—2 should agree with Matthew 3—28. Likewise, Luke 1—2 ought to be historically consonant with Luke 3—24. The body of either Gospel should agree with its infancy narrative.

They Forgot the Baby Who Disturbed them.

In Matthew 2 the presence of the magi in the court of Herod the Great disturbs the entire temple city of Jerusalem. The whole city is upset by this! Knowing the gossip network we should expect the whole kingdom to be turned upside down by this. But look here at something from the later Matthean narrative—

Matthew 13:54-56
[Jesus] came to his native place and taught the people in their synagogue. They were astonished and said, “Where did this man get such wisdom and mighty deeds? Is he not the carpenter’s son? Is not his mother named Mary and his brothers James, Joseph, Simon, and Judas? Are not his sisters all with us? Where did this man get all this?”

And consider this from the Lukan narrative—

Luke 9:7-9
Herod the tetrarch heard about all that was happening, and he was greatly perplexed because some were saying, “John has been raised from the dead”; others were saying, “Elijah has appeared”; still others, “One of the ancient prophets has arisen.” But Herod said, “John I beheaded. Who then is this about whom I hear such things?” And he kept trying to see him.

How could Herod the Great’s son, Herod Antipas, forget who Jesus was?? He knows nothing about Jesus (Luke 9:7-9)! How could the people in Nazareth not know who Jesus was? How could anyone have forgotten the massacre of the children (Matthew 2:16-18)? Remember: EVERYONE was upset and disturbed by the birth of Jesus, King of the Judeans. If that was historically so, why is it that no one expects anything of the adult Jesus once he begins his movement (Matthew 13:54-56)?

They Forgot Jesus was John’s Cousin?

But in all accounts of the public ministry of Jesus there is no suggestion anywhere that the Baptist is Jesus’ cousin. Consider the first chapter of the Gospel called “John”—

If the author of the Fourth Gospel really believed that John and Jesus were relatives, don’t you think he would have stated that? Why is the whole New Testament silent on this detail except the Infancy Narrative of “Luke”?

Some Consistency of a Different Sort

Despite all the differences, historical contradictions, and discrepancies, Raymond E. Brown thought we ought to recognize a degree of functional equivalence in both Infancy Narratives.

An annunciation is given to Joseph in “Matthew.” But in “Luke” this is given to Mary. Each identifies the child as promised Messiah and Son of God (we will talk later on what this expression meant). And whether shepherds come (“Luke”) or magi (“Matthew”), the purpose is to honor Jesus as God’s messiah.

Next time, we will talk about the two conflicting genealogies of Jesus. 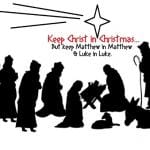 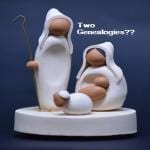 December 11, 2019 Genealogies Contradict in “Matthew” and “Luke”
Recent Comments
1 Comment | Leave a Comment
"No"
Ame Apocalypse & 666: What Does this ..."
"That's right. We can never be certain so let's not try. /s"
Raymond Timothy and Titus Are Forgeries, and ..."
"That's right. Context doesnt matter. Knowing anything about the history and background of Scripture just ..."
Raymond Timothy and Titus Are Forgeries, and ..."
"If you have time please take a look at this.Obama lottery 666 you have got ..."
geirsmith Apocalypse & 666: What Does this ..."
Browse Our Archives
Related posts from Messy Inspirations