Timothy and Titus Are Forgeries, and That’s Okay!

The Pastoral Epistles were not really written by Paul to Timothy or Titus, but that doesn’t make them invalid or uninspired.

Thinking about Paul and Timothy and Titus reminds me that we Catholics are slowpokes concerning the Bible. Can you blame us for that? Fifty-plus years after Vatican II and all we hear seems to be “Scott-Hahnverts” blabbing ignorance about Scripture. So maybe you can blame us.

But then again, look how our Catholic grandparents avoided Scripture before the Second Vatican Council. This was due to Latin Catholicism from Trent (closing at 1563) through the 1950s. Catholicism got so polemical and reactionary to the Reformation, it might well have been renamed “Anti-Protestantism.”

Following Martin Luther (and adapting Luther in ways he could never imagine), our Protestant brothers stressed Scripture. Therefore, reacting to that, Western Catholics emphasized the rest of Tradition besides Scripture. So we went into “lock-it-down!” mode.

Seeing the awful abuse of Scripture and how fundamentalism kills, you might—to a degree!—become sympathetic to Catholic authorities keeping uneducated people from directly accessing the Bible for so long. It wasn’t only to keep them ignorant and controlled in evil ways.

Ignorance about Timothy and Titus

It has been a long time since the days of Paul Anton. Between 1753 and 1755, his “Exegetical Essays on the Pastoral Epistles of Paul to Timothy and Titus” were published in Halle, Germany. Since then, the two documents called “Timothy,” together with the other called “Titus,” have been referred to by biblical scholars as “the Pastoral Epistles.” Don’t ask too many Catholics about Anton, by the way.

Often, I witness a lot of Catholic ignorance online, especially concerning the Bible. This past Tuesday was no different.

Tuesday was the Memorial of Timothy and Titus, saints and bishops. So online, I saw fellow Catholics continually referring to the Pastoral Epistles as if they’d been actually authored by Paul. But Paul didn’t really write them.

And many claimed he wrote these letters to Timothy and Titus, whom, they claimed, were two early Catholic bishops. No they weren’t bishops, folks, and the two were probably dead by the time these letters were written.

Timothy and Titus are Forgeries

Unfortunately, many Catholics are oblivious that Paul couldn’t have actually written the Pastorals. Apparently, they mistake what the Lector proclaims at the ambo for scientifically-precise, historically-accurate fact: “A reading from the Letter of Saint Paul to…”

In contrast to this spurious familiarity and widespread ignorance, almost all current New Testament scholars hold that Paul never wrote these forgeries. This is because when we compare them, lexically and stylistically, with Paul’s authentic writings, it becomes clear that someone other than Paul wrote these three letters.

Paul didn’t author the Pastorals. So, who did? Scholars refer to the actual author as “the Pastor.” He wrote these Pauline forgeries sometime after 80 CE, approximately two decades after Paul’s death. Not only was Paul dead by the time the Pastorals were composed but probably so too were his historical companions, Timothy and Titus.

God’s inspiration can work in forgers and forgeries, it seems. Don’t be shocked that I am calling 1—2 Timothy and Titus forgeries because that’s what they are, inspired forgeries. All forgeries efface a document’s real identity (check!), and all forgers intend to deceive (check!). Yep, “Titus,” “1 Timothy,” and “2 Timothy” are forgeries.

Chill Out with Timothy and Titus, Okay?

If you were to write something in someone else’s name, that would be a forgery, wouldn’t it? Well, that’s what happened to 1—2 Timothy, Titus, as well as four other letters attributed (falsely) to Paul. Deal with it.

That doesn’t make the inspired forger a villain, okay? Whoever “the Pastor” was, he deeply respected and cherished his memory of Paul. According to scholars Bruce Malina and John Pilch, this anonymous writer desired to contemporize Paul’s teaching for Jesus groups facing new challenges and circumstances. Composing these letters in Paul’s honored name, “the Pastor” hoped to bestow authority on his composition. Ultimately, this explains his deception in the name of honor, the core value to all Mediterranean peoples, and the Bible, a Mediterranean library.

Scholars explain that the historical Timothy and Titus, the Pastorals’ supposed recipients, were quite different from the Pastor’s concocted versions of them. These literary fictions reflect later times and are literary devices the author uses to cement Paul’s presence. Like the Paul we discover in “Acts,” they are fictional spins. That’s right!—”Luke” is a first-century spinmeister, not unlike David Axelrod and James Carville in our times.

Original Setting of Timothy and Titus

It’s good to compare Paul, Timothy, and Titus’s historical figures with how differently they get depicted by “the Pastor.” The historical Timothy and Titus, like Paul, were change agents working alongside him. In other words, they were Paul’s coworkers and assistants, and like him, Second-Wavers (see graph below). Hence, we read them described as such in the authentic Pauline letters.

Contrast that with the Pastor’s spin of Timothy and Titus. Now they have been turned into ideal episkopoi, or “supervisors.” This fiction relates to a later time. Cosmic Lord Jesus mysteriously refused to materialize Israelite Theocracy, and Paul and the Second-Wavers were dead. So now structures had to evolve inside the Jesus groups. Welcome to “Apostolic Succession” and the roots of ecclesiology, folks!

Again, the historical Timothy was a coworker of Paul’s in the 50s CE. Consider how old the actual Timothy would have to be if he was alive when “the Pastor” wrote the Pastorals after the 80s. But “the Pastorals” present Timothy as young and inexperienced. When the real Timothy died before this forgery was composed, obviously, his career as change agent coworker to Paul had ended. But “the Pastor” transforms Timothy into a Jesus group supervisor.

Therefore the “Timothy” of the Pastorals was constructed from assumptions of what type of person he must have been. Having finished his role as a change-agent alongside Paul, now Timothy has become a local Jesus-group supervisor. At least that is how “the Pastor” spins him.

By the way, because of the incipient proto-Catholic organizational notes of the Pastorals, Catholics emphasize these documents more so than other Christian traditions do. Together with Matthew 16 and John 21, they become for us our “canon-within-the-canon,” an unofficial list of texts and themes that are the real normative canon.

Because Catholics historically stress hierarchical authority and its historical beginnings, we value our reading of the Pastorals. Hence, we include it into our “canon-within-the-canon.”

It is essential to understand that change agents like Paul, Timothy, and Titus were not bishops and did not function as bishops. They did not shepherd communities and dioceses. Instead, these change agents introduced an innovation and then worked to help communities maintain the innovation without distorting it. But veering off course in human relations is inevitable. From the very beginning, the innovations disseminated by Paul’s team of change agents got reinterpreted and re-contextualized by their clients who adapted them.

Important Information from Timothy and Titus

What do these reinterpretations demonstrate? Among other things, that there comes a time when a change agent’s work finishes, and he or she terminates relationships with his or her clients! This is when a local person takes over. Ultimately, change agents cannot be bishops or supervisors. So every homily you’ve heard about how Paul was a bishop is wrong.

When looking at the Pastoral Epistles, we see Jesus groups where a local or sedentary supervisor (episkopos) had succeeded the itinerant change agent Paul. This had been the state of affairs for some time.

The “Greek” Israelites of Timothy and Titus

We shouldn’t be surprised that the language and concepts of the Pastorals were commonly employed by other first-century Hellenist-Israelite writers. As we have discussed before, Paul wasn’t really writing to Gentiles, nor was his mission to the Gentiles. He and his coworkers sought out fully enculturated Israelites, Hellenists. These were Israelite emigres living as minority groups in the Mediterranean world.

Being fully enculturated as Greco-Romans, Paul’s colonial Israelite clients at Ephesus exhibited many Hellenistic values and behaviors in the 40s and 50s CE. However, they retained their Israelite identity and kept Israelite traditions. This remained true two generations following the work of the historical change agents Paul, Timothy, and Titus through the close of the first century.

Therefore, “the Pastor” encourages his Jesus groups to maintain their Hellenistic lifestyle and not be coerced by “Judaizers” (Jesus-group people from Syro-Palestine) to adopt “barbarian” Israelite lifestyles and customs. This is the general argument of the Pastoral Epistles.

In what order were the Pastorals composed? Some scholars, such as Malina and Pilch, believe that “Titus” was written first because it reflects a Jesus-group order that’s undeveloped. Then, “1 Timothy” came next because it reflects more developed Jesus-group order and structures. Finally, “2 Timothy” got composed because it comes close to something like a testamentary record in how it reminisces about Paul’s work and death.

Being Upset About Inspired Forgeries

I know there are people reading this who are still reeling about me daring to refer to these documents as forgeries. Look: fundamentalism is terrible for your health. Like smoking, quit today. Besides, the inspired Bible is chock-full of forgeries and pseudepigraphs, compositions falsely titled or falsely ascribed to someone other than the genuine author. Take the Pentateuch, for example. Falsely called the five “books of Moses,” they were actually written by Persian-authorized scribes for immigrants to Yehud, the Persian colony.

Does that mean these Scriptures are invalid or without authority? No. Jesus-groups preserved and handed on these documents because they had the power to address their communities’ relevant problems. Their preservation did not result because people believed them to be “authentic” or “genuine” to the historical Moses, Paul, or whatever Israelite hero they were connected to. Some authorizing authority gave these documents their validity regardless of their true authorship.

The Jesus groups were the authorizing authority. They gave the canonical Pauline letters, both those actually written by Paul AND the forgeries, their extraordinary and normative status. We believe the Spirit of God works in the Body of Christ, yes? Then inspiration must be a messy business indeed! 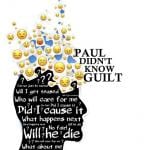 February 3, 2021 Paul Never Experienced Guilt
Recent Comments
0 | Leave a Comment
"No"
Ame Apocalypse & 666: What Does this ..."
"That's right. We can never be certain so let's not try. /s"
Raymond Timothy and Titus Are Forgeries, and ..."
"That's right. Context doesnt matter. Knowing anything about the history and background of Scripture just ..."
Raymond Timothy and Titus Are Forgeries, and ..."
"If you have time please take a look at this.Obama lottery 666 you have got ..."
geirsmith Apocalypse & 666: What Does this ..."
Browse Our Archives
Related posts from Messy Inspirations