Justin Thornbugh, an ABC-USA pastor in Indianapolis, IN, said this about the Summit (quoted from Facebook with permission): 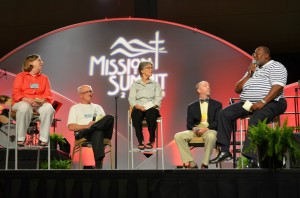 “ABC-USA is pushing us to common mission. That is what I found so fascinating at our Mission Summit. The big questions posed were not the ‘How do we grow our shrinking churches?’ and other such survivalist oriented questions. The central question was, ‘What IS God doing?’ It caused people to stop and think — to see that God is actually already doing things in their various contexts. It then forced the question of how do we become involved in the work God is already doing? …

“The mentality of Christendom seemed to be focused on what can WE do to perpetuate the power of the church. Post-Christendom is forcing the church to return to a more Gospel/Grace-centered understanding of what is GOD doing and how do we live into that. It is a dynamic shift of understanding power.

“One of the most troubling things at the Mission Summit was tied to the thing I found fascinating. People were not able to articulate or see how God is already working! The language around my table was so rooted in the mentality of ‘we have to do the work’ that noticing God’s present work was almost absent. People could not name how God was at work. …

“Our vocabulary needs to see a fundamental shift. It is, I think, a shift from this mentality of the power residing in our own capabilities to understanding that the power is from God. The power Jesus had was used for God’s purposes, not to show how pious he was or for growing his followers. It was a surrender to God’s transformative power that gave witness on earth.”

So great to hear that the American Baptists are making this missional shift, asking missional questions, and seeking new vocabulary for how to talk about this work. We all need new language and renewed imaginations to discern and to see and to step into the kingdom of God unfolding in our midst.

June 9, 2013
Maybe Methodists Are Not So Missional After All
Next Post 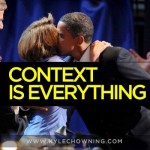 August 26, 2013 Context Is God('s)
Recent Comments
0 | Leave a Comment
"Sounds like just a new hipster word for Social Gospel. Just another inventive way to ..."
Greg What Does Missional Mean?
"Who knows what is in mind of the furue and whol will become what but ..."
Tony Williams Who/What Are the “Circuit Riders” of ..."
"Check out the Master of Arts in Missional Christianity at University of Dubuque Theological Seminary. ..."
Christopher B James Missional in Higher Education
"Hello, Steve! Mike Morrell asked me to contact you because he really appreciates your blog ..."
Richard Top 10 Reasons to Make TransFORM ..."
Browse Our Archives
get the latest from
Progressive Christian
Sign up for our newsletter
POPULAR AT PATHEOS Progressive Christian
1