When we ran our recent series of  posts on work and vocation (linked at the bottom of this post) in Christian history by Faith and Work Channel senior editor and Christian History magazine senior editor Chris Armstrong, we accidentally missed this one. Ooops! Enjoy. If you want to read more of what Wesley had to say in his own words, you can check out our series of posts on Wesley’s sermon “The Use of Money”:

While Wesley (1703–1791) claimed that Christians ought to preach repentance often and politics rarely, except when 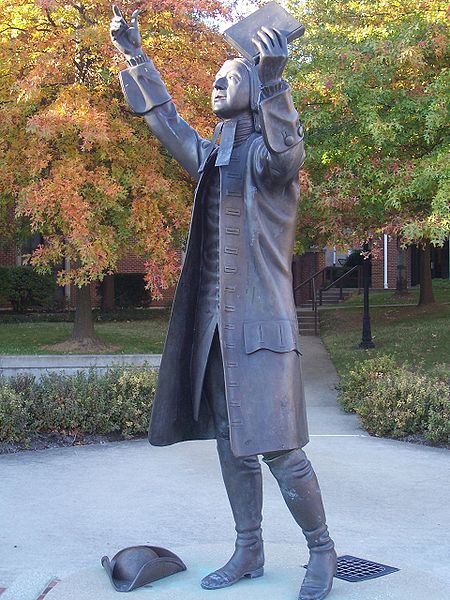 necessary to defend the king, he was actually not shy about expressing his political and economic opinions. Those opinions were typical of an upper-middle-class, Oxford-educated clergyman, but that did not mean he was unconcerned about the problems of English society.

One of his responses was to issue scathing indictments of those who profited off of others. His tract “Thoughts on the Present Scarcity of Provisions,” for instance, claimed that the poor were hungry because of the influence of “distilling, taxes, and luxury.”

He also tried to help. His book Primitive Physic (1746) was an inexpensive compilation of home remedies for those too poor to pay doctor’s bills. Wesley’s system of organizing his followers into classes and bands within the Methodist “societies” not only discipled them in spiritual growth but also distributed relief funds collected from society members. He established a medical clinic and maintained the dispensary himself, although it eventually had to close for lack of funds. He founded tuition-free schools for poor children, one in his own home. Under his direction the Foundry Chapel in London administered a revolving loan fund that served over 200 people a year. And he also founded a house for widows and orphans and regularly ate his meals with them.

In short, Wesley taught not only personal holiness, but also, quite centrally, social holiness. In examining the motives behind John Wesley’s extraordinary lifelong dedication toward bringing material as well as spiritual flourishing to the poor, Duke’s Richard Heitzenrater argues that it comes from a Christian virtue ethic. For Wesley, ethical behavior in the workplace, for example, came not from an ethic of obligation—gritting your teeth and performing a series of duties. It came from a changed heart. Only a changed heart could restore the individual dignity of human beings created in the image of God. And only the restoration of individual lives could finally restore society. In other words, Wesley’s theology of human dignity and virtue laid a firm Christian foundation for economic virtue.

In addressing the needs of the poor, Wesley did not rail against capitalism, though he did preach against its abuses. The best way to flourish economically and socially was not to change an economic system, but rather to put all else second to the Gospel, and let the transformation of our hearts that the Gospel brings influence every other area of our lives and work. He did recognize that very few people reached what he called “entire sanctification” or “perfect love,” in which all their impulses and desires were shaped by that central desire for God. But he insisted that the truly Christian person was also a flourishing person – someone largely happy and content in all his or her ways. Seek first the kingdom of God, and all these other things – our worldly lives, our work – will follow after in their proper order.

Though this might seem an individualistic creed, it was not. First, Wesley established brilliant organizational forms to nurture Christians in both personal and social holiness: the societies, the classes, the bands, the annual conferences. Think of the class meetings, for example, in which one confessed one’s deepest struggles in a close circle of people. This came from a great insight into our nature as communal beings—an insight that even as recently as the 1960s, secular Americans were trying to recapture in their encounter group therapies and their communes. The truth is, you need communal forms if you are to become a better person—you need to be open to the edifying and challenging words of others, to being sharpened as iron sharpens iron. Wesley brought organizational genius to his movement.

And he applied that genius to the betterment of the world and the adding of value to communities through many economic means. Like his network of entrepreneurial dispensaries – essentially drug stores – that he founded in order to provide the necessary medicines for poor folks, or his multimillion dollar publishing operations, which left him with huge amounts of money that he had to figure out how to give to the poor.

This post originally appeared at Grateful to the Dead.

January 28, 2015
The craftsman and her environment: Work driven by an ethic of care
Next Post

January 31, 2015 The necessity of risk
Recent Comments
0 | Leave a Comment
"There have been many studies about the best environments for work/creativity/productivity but management usually follows ..."
John Purssey Why I Don’t Like Open Offices
"Choices are exhausting. And yet there are also so many things that used to be ..."
Marianne Aldrich Why Am I So Tired?
""The best is the enemy of the good." <g>"
billwald Why Am I So Tired?
"Thanks for sharing.....$1000 content writing"
Suhas Barhate This is My Content, Tweeted for ..."
Browse Our Archives
get the latest updates from
MISSION:WORK
and the Patheos
Best of Patheos
Channel
POPULAR AT PATHEOS Faith and Work
1

Leading Through the Stages of Transition
Editor’s Note: Dr. Chip Roper, Founder and President of the VOCA Center,...

The Jesus Path away from Anxiety, Division, and...
﻿﻿ Click here to watch the video at Vidyard   Listen to...
view all Faith and Work blogs
What Are Your Thoughts?leave a comment
Copyright 2008-2021, Patheos. All rights reserved.