What can really help hurting workers?

This article originally appeared at Hang Together. 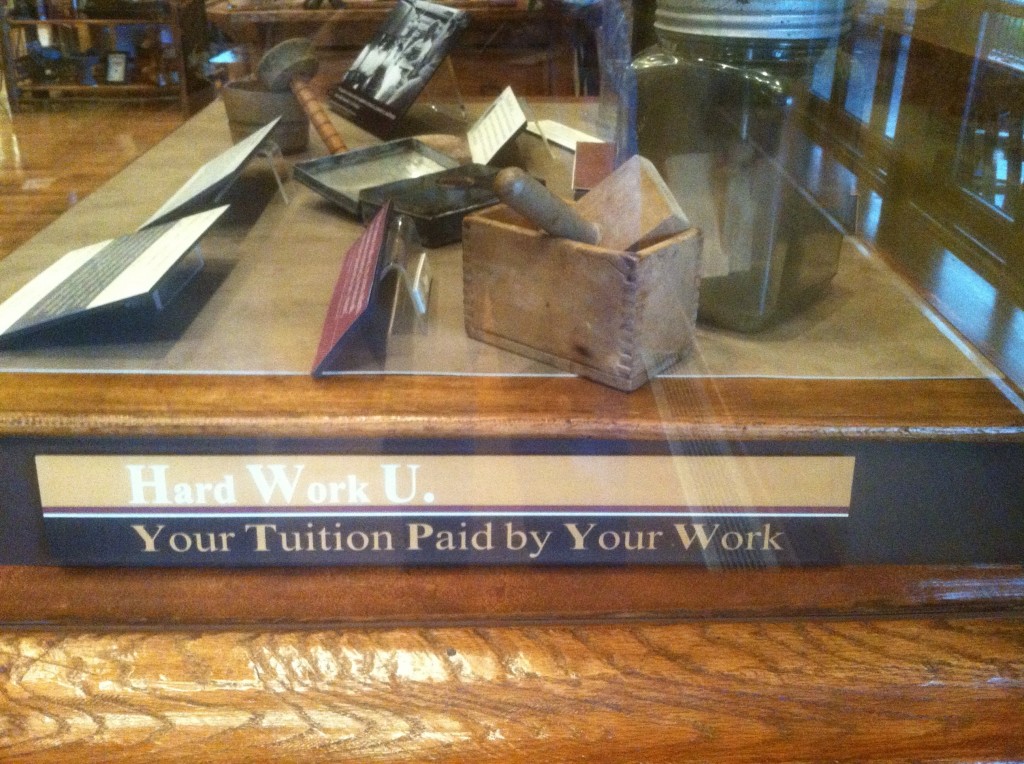 College of the Ozarks’ “Hard Work U” Program

A while ago, I saw a lot of attention paid to this article by Jonathan Rauch on the economic crisis of America’s working class. He’s looking at the right problem, but he’s looking at it all wrong. As a result, he misunderstands both the cause and the needed remedy.

Rauch is right that the bottom half of workers have a long-term problem: the economy still produces lots of wealth for the top half, but not so much for the bottom. Unfortunately, Rauch mostly thinks of this in terms of moving wealth from the top half to the bottom – not, to be sure, through government transfer programs, but through wages. Unfortunately for Rauch, transferring wealth from one social class to another is not the purpose of wages. The purpose of wages is to compensate workers for their work. The value of wages therefore reflects the value of their work (except where cheating, cronyism or other ethical failures intervene). The real problem is that the bottom half are not increasing their production of wealth. Rauch’s failure to think in these terms sends his whole analysis off track.

Helping the bottom half of American workers become more productive should be an urgent concern. And I don’t mean we should just stand back and scold them until they’re more productive. There is much we can do to help them recover their productivity growth! Unfortunately, we’re not going to do any of the things we need to do as long as we think about the problem in terms of transferring wealth rather than increasing productivity. Rauch’s article shows this; most (though not all) of his poilcy proposals represent a laundry list of failed nostrums. Below, I’ll propose a counter-list that I think will find significant bipartisan support and will actually be effective in helping the bottom half get back in the wealth creation game.

Rauch is only the latest person to reproduce these two graphs, brought to you by the hard-left Economic Policy Institute: 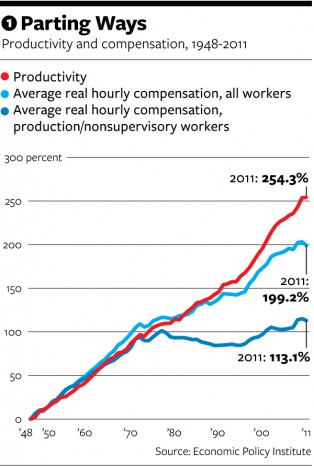 Boy, sure looks like the working man is getting the shaft from the bigshots, eh? 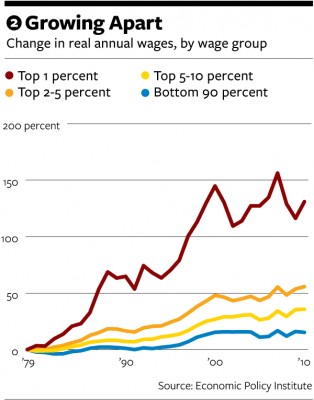 There’s lots of productivity in the economy, but those greedy one-percenters at the top are hogging it all!

Now, what’s missing from these graphs? Anyone? Anyone? Bueller?

Yes, you there in the back – Dan Kelly!

Go to the top of the class, Dan! (Disclaimer: Not actually a quote from Dan Kelly.)

From start to finish, Rauch’s article frames the whole issue in the wrong terms. Productivity is something that’s just out there in the ether, like sunlight. Wages are supposed to transmit it to workers.

A smaller share of the value that companies produce today comes from the physical goods made by people like factory workers, and a larger share comes from ideas and intangible innovations that people like software designers and marketers develop. Between the early 1980s and the mid-2000s, Shapiro says, the share of a big business’s book value accounted for by its physical assets fell by half, from 75 percent to only 36 percent.

“So the basis for value shifts,” Shapiro explains. “This is the full flowering of the idea-based economy.” Which is great if you are a brain worker or an investor; otherwise, not so much.

See Charles Murray’s new book for much, much, much more evidence of this.

So, what does Rauch want to do? Here’s his list of proposals:

• Get more people, especially men, through high school and college. (See p. 16.)The agenda includes an increase in financial aid and loans, a push for states to require that students stay in high school (as Obama has proposed), and encouragement of online learning.

The problem with financial aid is that it doesn’t help, it just drives tuition up. Virtually everyone who graduates high school with the academic qualifications to attend college actually attends college. You can’t get more kids into college without fixing K-12 schools. Requiring students to stay in high school is a non-starter; even if state legislatures passed it, which they won’t, it would just force high schools to dumb down their academic standards to keep the would-be dropouts from flunking out.

By contrast, online learning does have huge potential and we should be encouraging it. The problem here is that there’s not much we can productively do besides get out of the way. Recent efforts to use policy to promote online learning have basically amounted to attempts to create a government-protected online learning cartel – and we all know how well that works out. That said, there are some innovative proposals for how we can more effectively get out of the way.

• Expand federal support for job training and consolidate the tangle of programs. Obama wants to do this, too, as do many politicians in both parties—which doesn’t make it a bad idea.

Government job training programs are a long-proven loser. What we need to do is fix K-12 schools. School choice has improved public schools every time it’s been tried. Universal school choice would drive a radical K-12 revolution.

• Expand and improve vocational education for those not suited to college. (See p. 12.) Apprenticeship, in particular, can help prepare young men for the kinds of jobs that the economy increasingly creates. The United States does far less of this than, say, Germany does.

The insuperable obstacle to voc-ed in the existing school system is its long-term history of racism. In the 20th century, voc-ed was a code word for warehousing black students. Given the state of the schools, it’s hard to resist the conclusion that voc-ed would go down exactly the same path if we brought it back today. That’s why, every time a voc-ed proposal starts to gain momentum, it’s immediately killed by a coalition of progressive racial/ethnic activists and conservatives who view voc-ed as “the soft bigotry of low expectations” and a step away from traditional liberal arts education.

There is a way to solve this problem, though: school choice. If “the man” isn’t imposing it, it’s not racism. And if it were accountable to parents instead of to a faceless union-run bureaucracy, it would work. School choice would open the path to alternative education.

• Change Social Security disability benefits so that the program helps people keep working (and helps employers accommodate disabilities) instead of encouraging them to leave the workforce, as it does now. An analogous overhaul of welfare in the 1990s was a notable success.

Too right! Nothing but net for Rauch here.

• Liberals talk about increasing wage subsidies for low-skill jobs, raising the minimum wage, or both. Although such measures can be expensive, they may be worth it if they keep men working.

But work loses all its value if it’s not productive. Rauch’s argument here is that men need to be in jobs in order to be civilized (he especially looks at the breakdown of marriage). However, work only has this civilizing effect because it orients us toward the good of our neighbor, establishes that we are contributing to the common good, and holds us within social structures where we have to behave ourselves.Subsidized jobs won’t provide any of those benefits, because they’re not productive.

In fact, this direction would only worsen the problem Rauch is looking at. It would be (yet another) step toward severing the connection between work and productivity among the working class.

[Update: Can’t believe I forgot to mention: the minimum wage destroys jobs. Rauch wants to lift wages to lure men into work, but the minimum wage will make work harder to find. What the minimum wage does is lift wages for the most economically productive among the workers on the bottom rung, while destroying jobs for the least economically productive. So it tends to benefit those who need it less at the expense of those who need it more – particularly, those who are most likely to be already marginally attached to work. Great thinking!]

A better path was laid out earlier this year in a New York Times article co-written by economists at the conservative AEI and progressive CEPR: Reform U.S. labor law to allow companies more flexibility to respond to economic challenges in ways that radically reduce job loss.

Yes, this is needed. However, it will be important that it comes from institutions with the moral and cultural credibility to deliver the message. No disrespect, but the working class wouldn’t listen to Murray – or to Rauch, or to me.

Churches are obviously going to be central here. They have the moral standing, they’re in the neighborhoods.

And most of all, they have the theological resources to do this with the right approach – with hope, not Phariseeism. No cultural message works for long if it’s negative. What’s needed is a recovery not simply of the stigma of nonwork but a lively and holistic sense that work is good – that it’s meaningful, that it provides dignity and hope. Today, sociologists mostly talk about Max Weber’s thesis that the Reformation paved the way for capitalism in terms of Protestantism restraining disorderly desires and cleaning up people’s behavior. It did do that, but more importantly, it challenged the late-medieval ethical dualism that looked down its nose at economic work. After the Reformation, economic work was central to serving God and making the world a better place for your neighbors.

Such an approach would get to the heart of the issue: productivity. The gospel message for economic work is that human beings were made to do work that is fruitful – in other words, productive. The biblical narrative begins with a garden and ends with a city; humanity’s job, in God’s original plan, was to get the world from one state to the other through dilig

ent, productive work. That dignity and freedom are still available to us now.

My friends in seminaries are always talking about starting a new Reformation. Well, reconnecting the gospel to the economy is the way that’s going to happen, if it happens. It worked for Luther and Calvin, and it can work again.

February 26, 2015 The faith and work conversation we're NOT having
Recent Comments
0 | Leave a Comment
"There have been many studies about the best environments for work/creativity/productivity but management usually follows ..."
John Purssey Why I Don’t Like Open Offices
"Choices are exhausting. And yet there are also so many things that used to be ..."
Marianne Aldrich Why Am I So Tired?
""The best is the enemy of the good." <g>"
billwald Why Am I So Tired?
"Thanks for sharing.....$1000 content writing"
Suhas Barhate This is My Content, Tweeted for ..."
Browse Our Archives
get the latest from
MISSION:WORK
Sign up for our newsletter
POPULAR AT PATHEOS Faith and Work
1