Can a young American, Muslim woman who discovers her superpowers change the way Muslim women are perceived in the United States?

My knowledge of comics is limited to what is presented in mainstream film incarnations—who among us hasn’t seen one of the many films that portray superheroes onscreen? Those cosmic tales where protagonists (predominantly male, of course) appeal to so many for the escape of life’s misfortunes—that ability to transcend the everyday drudgery through spectacular feats, conquer Evil, and get the girl at the end of the day.

I was recently intrigued to learn that G. Willow Wilson (whose memoir The Butterfly Mosque and novel Alif: The Unseen I’ve reviewed for MMW in the past) is herself an unabashed comic fan, not to mention a comic book author (she penned Air for DC Comics in 2008-2010) currently working on the Ms. Marvel series. I popped over to my local comic book store over my lunch hour to pick up the first couple of issues.

Ms. Marvel tells the story of a young American-Pakistani woman, Kamala Khan, who’s in the process of discovering her own superpowers. She’s trying to identify who she is (literally) alongside the backdrop of her high school dramas, family dynamic, and friends. She’s the quintessential young comic book hero who happens to be a Muslim woman.

Let’s reflect on that for a moment. Growing up in the nineties in the US, there were no characters in the library books I checked out who were brown or Muslim. Later on, books by Jhumpa Lahiri and Zadie Smith were godsends. On TV, we’ve only recently started to see protagonist, mainstream roles go to women of color (think: Scandal and Mindy Project, for example). In mainstream films… (I can’t identify any recent films headed by a lead role played by a woman of color). The number of Muslim women in mainstream leading roles across different forms of media has been essentially nil.

When Muslim women are portrayed in literature or film, they’re often presented in ways where they need to be “saved,” often lacking the agency to accomplish this on their own. Instead, there’s usually a savior around somewhere to save the day (Nicholas Kristof, we’re looking at you). Kamala represents a radical diversion from this—not only does she not need to be saved; she is the one doing the saving work for the world. She finds herself in an unusual circumstance with her new powers that she tries to better understand (mostly on her own). Her loved ones are who she goes to for help and assistance (at least, it looks like it’s headed that way). She’s the only savior in sight.

In an interview for Hero Complex, Wilson talks about how she chose Kamala’s superpowers—which include having strong, bendy limbs and the ability to assume the identity of others:

In Ms. Marvel, Wilson portrays the details of Kamala’s life holistically—as she’s coming into her superpowers, she’s also seen engaging with her more religious-minded brother (who shares anecdotes illustrating Islamic teachings with his family), addressing mosque gender dynamics with one of her Muslim friends (together, they bolt from a mosque discussion as the women’s section is screened off from the men’s section), sneaking out to parties, and trying to resolve conflict with a friend from school.

Wilson isn’t shy to address some of the gender issues that Kamala faces as a Muslim woman—this would have been all too easy to do, focusing on her new superhero powers at the expense of the rest of her life. Kamala comes across as a woman with her own issues to work through, serving as a wonderful example to all of the Muslim girls and women who, just like Kamala, struggle with bizarre gender dynamics at the masjid.

I’m looking forward to continuing the series, especially the recurring trips to the local comic bookstore. The staffperson there had also read the series, and looked forward to seeing how her character developed and came into her own. Kamala is a nerdy, cool young woman I would have loved to read growing up—hopefully others (of any age, and whether they’re Muslim or not) will enjoy it as well. Wilson’s characterization of Kamala is wonderfully complex, the story weaving in elements of comic lore, religious teachings, family dynamics, and issues of gender alongside the beautiful art—it’s a fascinating read.

Ms. Marvel can be purchased at local comic book shops in the United States and online at Marvel. And until June 6, you can try for a chance to win a copy of it from a giveaway over at wood turtle! 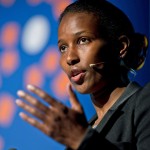 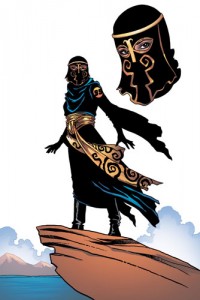 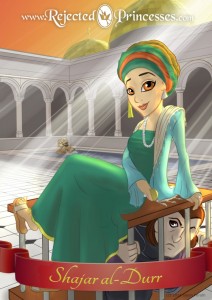