Book Review: God Told Me to Hate You 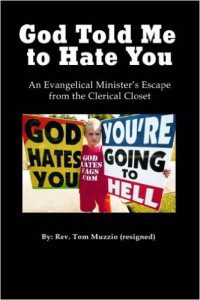 I was asked by Patheos to do the following book review:

In God Told Me to Hate You: An Evangelical Minister’s Escape from the Clerical Closet, Tom Muzzio describes his journey as an Evangelical Christian convert who became a prominent clergyman but eventually loses his faith due to a combination of facing his homosexual orientation and factors he found hypocritical within his religious community.

The memoir is interesting and unique in the shared stories of his atheist upbringing, conversion process to Christianity which became more fundamental as he went, diverse travels, theological studies, a stint in the military, missionary service and many other personal experiences. Where it has a tragically common thread to the many LGBTQ+ Mormons I have worked with and known over the years, is in the reality that his religious community could not make space for the appropriate developmental life journey of a gay man. Not only could they not make space for him, they campaigned and discriminated against homosexual members in aggressive, profound and historically relevant ways.

Some of the problematic themes he brings up with the Christian tradition he so adamantly adhered to for many years are things I also have concerns with from within:

Tom describes a faith transition that was incredibly painful, fraught with personal contradiction, disillusionment and potential consequences.  Married to a woman, a prominent leader in his faith community, and his entire livelihood tied to his ministry work… he was facing a dramatic life shift. As he comes out to his wife, faces different choices around his profession and starts leading a life that is aligned to his orientation and values… he continues to experience a Christian religious movement that does not align with his understanding of Christian theology. The second half of the book describes his concerns for the direction of the “religious right” and the implications therein for the laws of the land, discrimination, and social justice. He ends by describing how he still has evangelical energy within him…. being a missionary and preacher for causes of personal import. In a sense this memoir becomes a sociopolitical critique of how mainstream Christianity in the United States has fundamentalist attributes that he warns can easily take root and have lasting consequences.

As a side note, it was somewhat amusing to see how many times he had been taught in his theological studies that Mormons are not Christian, are damned and in need of salvation. 😉

December 5, 2016 History behind Historic AASECT Position
Recent Comments
0 | Leave a Comment
"Mormonism claims to be the most American of all religions. When it comes to racism ..."
Morm on Do Better
"I was once given a great gift--by the Navy (indirectly, in this case). I was ..."
CalSailor Racism is bigger than hate
"Fine report, Natasha on a wonderful set of meetings. I hope that more meetings can ..."
Mark Matheson Thru Cloud and Sunshine
"So, let me get this straight, you feel that “ecclesiastical leaders should be leading the ..."
GDS Working Towards a Non-Splintered Community
Browse Our Archives
get the latest from
The Mormon Therapist
Sign up for our newsletter
Related posts from The Mormon Therapist