Earlier sections in this course1: I Can’t Believe It’s Not Fascism

We’ve touched on some typical misconceptions about fascism. What do fascists believe?

There are a few different strands in fascism, some of which conflict with each other. So I’ll stick to the most basic ideas, plus a few less-than-universal but still common motifs, to give you the shape of it. We’ll be coming back to each of these points in more detail later on.

The Othala rune, whose name in proto-Germanic means “inheritance,” is sometimes used as a symbol of fascism.

The main theme of fascism is something called ultranationalism. Ultranationalism means the promotion of one’s own people group above all others, with “people group” here understood in an ethnic or racial sense. In America, the group that fascism promotes is the so-called “white race,” i.e. most people of European heritage.2 The greatness of “white” civilization is used as proof of the inherent greatness of the race, and vice versa.

The idea that the “white race” constitutes any sort of ethnic unity is, biologically speaking, ridiculous. A lot of fascists therefore fall back on language about “identity” or “culture” that can serve as proxies to defend. (This is why you may see leftists get extremely suspicious when “Western culture” comes up: for many white fascists, the phrase is nothing more than a dog whistle.)

There are other elements which characterize the “white race” that fascists also care about. For instance, they tend to have very strict views about gender norms and concerns with fertility. Fascists claim the “white race” is dying out, because white people aren’t having enough (pure-bred) babies, so women need to be kept firmly in the domestic sphere, in order to encourage white births. Ergo, equal rights for women and queer people are typically frowned upon by fascists. An individual’s right to choose their own life isn’t important—only the people, the race, the Volk. 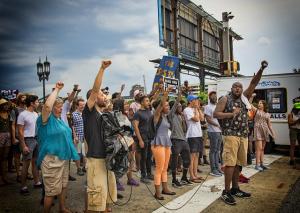 But what’s with all this protectiveness and anxiety, if the “white race” is superior? Simple: the rightful heritage of whites is under attack from an enemy. This enemy is trying to sap the vitality of whites and destroy their hegemony, in order to claim power and prosperity for itself.

This is where anti-Semitism comes in. Not every form of fascism is equally anti-Semitic, but American fascism trends that way: note the slogans from Charlottesville in 2017, several of which (e.g. “Jews will not replace us” and “Blood and soil”) came directly from the anti-Semitic rhetoric of the Nazi party. Jews—sometimes coded as “elites” or “globalists”—are, according to the nationalist conspiracy theory, masterminding the dissolution of the “white race.” Multiculturalism and civil rights for minorities are the stalking horse for immigration, race mixing, and, ultimately, the destruction of white culture. If you’ve come across articles or video essays about “the Great Replacement“? That’s what this is.

So if the “white race” is under attack from this Jewish conspiracy that totally, one hundred percent exists, you guys, what do we do? Well … 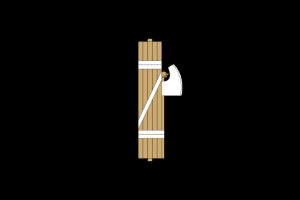 Flag of the Partito Nazionale Fascista under Mussolini.

The solution proposed by fascists to protect their people from this (imaginary) enemy is an ethnostate: a “white homeland” from which people of other races, along with other undesirables, are excluded.

This is where the violence comes in. Some fascists will tell you they oppose violence—they’re isolationists and not expansionists, they’re against immigration but obviously don’t support violence against the non-white people already here, etc. But the truth is, violence against other races is baked into fascism. You can’t build an ethnostate without it. As long as non-white people mingle with white people, there will be cultural and (“worse”) genetic mixing between the groups. Which means you not only have to prevent immigration, you have to segregate the races. But people still fall in love and/or have sex, so you have to exile the non-whites, but then that doesn’t always work, until finally the only solution is—the “final solution.” Extermination.

But hang on. If this is what fascism is about, then why haven’t Catholics resolutely opposed it since the very beginning? There are a few answers to that question, and none of them are particularly flattering …

Later sections: Infiltration, Children of the Sun, “The Great Replacement”

1If Dennis Prager can call his erratic YouTube channel a “university,” I can call this blog series a course.

2The word most is important here. Jews don’t count, and different forms of fascism make additional exceptions. Nazi fascism famously centered on “Nordic” peoples, and made targets of Roma and Slavs, as well as Jews; Anglo-American racism in the nineteenth century often classified Irishmen and Italians as “colored” rather than white.

January 22, 2021 The Future of the Pro-Life Movement
Recent Comments
0 | Leave a Comment
Browse Our Archives
get the latest from
Mudblood Catholic
Sign up for our newsletter
POPULAR AT PATHEOS Catholic
1