Eyes Open to His Wisdom 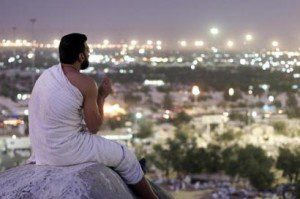 The Hajjis are gathered on the plains of Arafat, the holiest, most wondrous day of the annual Hajj pilgrimage — standing in prayer until the sun sets. Muslims are taught that God and his angels come down from the heavens and get as near as possible to the pilgrims, and He listens to the fervent, yearning prayers pouring forth from lips and hearts.

And those prayers of Hajj pilgrims are surely answered, we are also taught. Because this pilgrimage, which able-body and financially-able Muslims must do once in their lifetime, doesn’t come easy. It comes of struggle and sacrifice, of intentions and reflections, of the letting go of self and the embracing of a world Ummah. It brings forth the most raw, most naked relationship with God and the realization that He, and He alone can grant us what we most desperately want; that He, and He alone, deserves our worship.

I stood on those plains of Arafat eight years ago with my husband, having left behind our four-year-old son Lil D – autistic, unable to speak – and our 18-month-old daughter with my in-laws. I had come to Makkah, to the Ka’ba, to Arafat, the tent city of Mina and Muzdallfah for the sake of Allah. And I prayed those prayers most intimate to a mother in turmoil — a mother on the edge of losing hope, a mother desperate to regain her faith.

It’s so easy to forget that most vulnerable and special time, when emotions were laid bare, and I believed, truly believed that somehow that which I most deeply prayed for would happen.

I blink, and eight years have gone by, and Lil D is now 13, Amal 10 and we have a third child, Hamza – and he is already six. Days filled with the mad scramble of getting ready for school in the morning, office work, homework supervision, soccer practices, daily prayers, snatches of Quran reading, cooking dinners, breaking up sibling fights, monitoring of YouTube videos being watched, dinners, meds, girl drama, toy cars underfoot, and a million things that come with raising a son who is still profoundly autistic, still mostly unable to communicate.

And I wonder, what happened to those prayers silently uttered on the plains of Arafat? A friend once told me, as I was contemplating how untethered Lil D is from the rituals of our faith, that my son doesn’t owe my faith anything. But God owes him everything.

And what has He delivered? When will I be able to see and understand the wisdom of His decisions, understand how and in what manner He is answering my prayers? When I want so badly for things to be easier for Lil D, for things to be stable and calm and for him to learn to communicate and to bathe himself, clean up after himself when he uses the toilet, for him to learn independent living skills, for him to be kept out of harm’s way and always be safe and protected – how are these prayers being answered?

These prayers are the same and yet so utterly different from what I asked of Him that day in Arafat. My prayers have evolved over the years as has our lives with Lil D, as he grows and the nature of his autism changes with him Perhaps that’s how Allah is revealing His wisdom to me when I struggle to understand.

And I need to see what is here, in front of me.

Because this past week, in fact since the Islamic month of Dhul Hijjah began nine days ago, have been pretty phenomenal for Lil D. There was this: 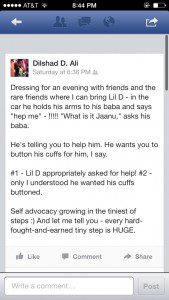 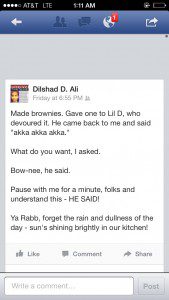 And we went to Open Gym the other day, a program that pairs high school students with autistic children and has them doing physical activities, like soccer, running, walking the track and swinging. Lil D has been involved in Open Gym every fall and spring season for eight years, and this Sunday he has one of his best days ever. This boy rarely does anything more than walk around the track with his partner of three seasons, barely engaging with him. But this time, he laughed and held his partner’s hand around the track. They kicked a soccer ball back and forth together: 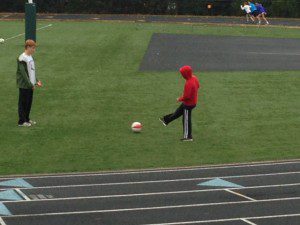 And they did this: 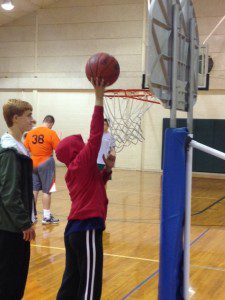 So many people, from parents, to the teen Open Gym captains, to Lil D’s own partner remarked to me – what are you doing different with him? He’s calm. He’s happy. He’s engaged. His bus driver and aide, his teachers at school and his home therapists all have said the same thing to me: What are you guys doing differently? He seems so much happier and engaged lately.

What am I doing differently? Not a damn thing.

But maybe this is not about the doing, which is what I’ve been all about for so very, very long. Doing, researching, helping, meeting, talking, advocating, fighting, negotiating, evolving, accepting, changing, learning, growing.

Maybe this is about things happening in ways I really, really need to see. Eyes wide open to His wisdom.

Prayers being answered not in the way I wanted or imagined, but in ways that are right for us, for Lil D — beyond our best understanding. Because isn’t that the hardest thing for us to accept?

Help me, ya Allah. Help me to see. Help me to relax and appreciate and revel in the miracles that are unfolding in front of me. Help me to not be stifled in sharing and acknowledging my son’s good days, his gains, his triumphs and his accomplishments. Don’t let me be paralyzed by thoughts that if I shout our joys from the rooftop, the other shoe will fall.

Let me not be held back one minute more by the ghost of prayers seemingly unanswered. Let me know that they are being answered – that this is my Hajj dream being fulfilled. 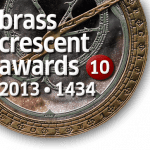 October 11, 2013
Vote! Patheos Blogs (Including Mine) Nominated for Brass Crescent Awards
Next Post 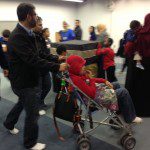