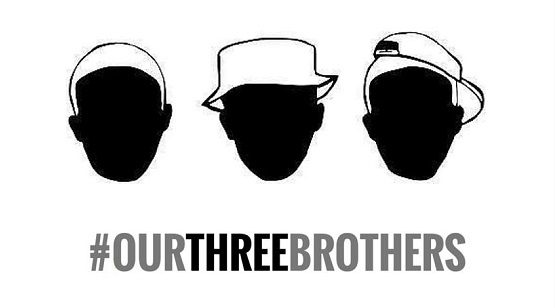 Shot, execution style, last week in Fort Wayne, Indiana. Is this another horrible by-product of the growing anti-Muslim hate and rhetoric being pumped by presidential candidate Donald Trump and others? Is it a hate crime? Are Muslims being targeted? (Omar and Tairab were Muslim. Mekki was Christian, according to news reports.) Is it random, but tragic, violence? Or, is this another example of the rampant gun violence in a week when:

A gunman shot six people to death in Kalamazoo Michigan, randomly selecting his victims as they went about their lives, according to police.

A gunman killed a 37-year-old mother in Hazelwood, MO as she rode in her car.

Three are dead in Hesston, Kansas, when an employee went on a shooting rampage, injuring 12 more.

Is it yet another example of young black men being target and killed simply because they are black? Does this have to do with their families coming here as refugees from Sudan?

Is it a combination of some of this, all of this? None of this? The intersectionality of too much hate affecting too many people?

(The Fort Wayne Police Department is saying today that this is not a hate crime, “with all certainty. Spokesperson Michael Joyner told Vice News: “We know that it’s not a hate crime.” But they have yet to pinpoint a motive for the murders.)

We don’t know what this is. But we know one thing: It is utterly, utterly tragic.

In the coming days, as the investigation unfolds and the families are given time to mourn, process and say what they want to say, we’ll all come to know more. But for now, the time is for mourning, for condolences, for prayers, for thoughts for the victims and their families. Now is the time to respect what the parents of these murdered young men need – time to themselves, to live in their grief and mourn.

Now is the time to let our hearts mourn and stand with the families of these innocent victims, to push for a thorough investigation and to say their names. Remember their names. Remember and honor their humanity. Now is the time to recognize that as the narratives unfold, change, are reinterpreted and twisted, that family members are feeling the need to clarify that the victims were good boys. 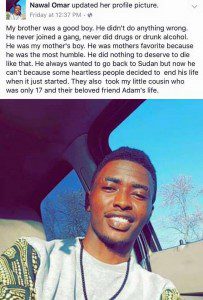 Wrote Afaq Mahmoud, a cousin of two of the victims:

Their faces are trending on social media. Do you know how triggering it is to see strangers drag your blood through the mud? They were murdered on Wednesday and again every day since then. They were killed on Wednesday and those who try to tarnish their names are killing us too.

They were good boys and people are saying their skin makes them thugs and their faith makes their deaths worth celebrating.

This whole thing has taught me a few things.

Although their funerals were on Saturday, they’ll be buried every day since.

I won’t sit silently and watch this happen.
If you have somethings to say about these boys, say them to me.
If you have questions, ask me.
Please let them rest.
Please look at how their family mourns them, and tell me again how they’re not human.

They were good boys.

The Muslim Anti-Racism Collaborative had this to offer:

The loss of these bright and promising Black Sudanese Muslim youth have come as a great shock to us all. Their deaths mark the first triple homicide in Fort Wayne in more than a decade. It is a loss for their city, their state, and to the entire American Muslim community, as shown by the presence of hundreds of individuals who came from over 30 states to attend Taha and Muhannad’s funeral prayers.

As we await further information from the families and local community, we hold them in our prayers. We pray for justice for our three brothers, and that the police investigations warrant results. We join nearly 8,000 others who are calling for as full and comprehensive an investigation as possible to ensure that this case does not go unsolved.

We pray for healing and strength for the families. We ask Allah (SWT) to envelop them in His mercy during this difficult time. We call on the community to refrain from idle, hurtful speculation, and to join us in making dua for answers and for justice. May Taha, Muhannad, and Adam be admitted into the highest paradise.

March 10, 2016 On the Donald, Medicaid Waivers and What I'm Concerned About
Recent Comments
0 | Leave a Comment
Browse Our Archives
get the latest from
Muslim
Sign up for our newsletter
POPULAR AT PATHEOS Muslim
1