I hadn’t thought about it until today, but now I remember it like it was yesterday.

Fourth grade — my birthday in the mid-1980s. I had invited a bunch of girls from my class over for a birthday party, including the young lady who was the reigning “it girl” in our grade during our elementary school years. I, and my best friend S, were one of the only persons of color in our lily-white small, Midwestern school in North Dakota.

For sure we were the only ones of Indian heritage and the only Muslims. It was quite an experience growing up there, more positive and warm then you’d think expect. But I digress.

Barbie had just come out with a line of “International Barbies,” and Indian Barbie, wearing a sari and the “battu” or “dot” of a Hindu woman, was part of the collection. I was overjoyed. My mom wore saris in family and ethnic gatherings. Heck, my mom had worn saris around the house throughout my toddler years and early childhood before she — as she went back to our local university to get her degree — transitioned to slacks (never jeans) and longer tops (many sewn by herself, as the tunics of now were not really around back then.)

It didn’t matter that the doll was Hindu and not Muslim. My upbringing was Muslim and Indian and American. Her darker skin color shined like a brilliant brown beacon to me. In class, the popular girl told me she was going to get me the doll as a birthday present. When I excitedly told my best friend S, she got upset, saying she had planned to get me the doll as well.

I’d rather have it from you, I told S. We were besties, pushed together by similarities in age, faith and skin color, and we had forged a genuine friendship that began when we were one-years-old that remains to this day. We fasted our first fasts together, which made us even more the outsiders in school, and we were allowed sleepovers at each other’s houses, something both our moms forbid anywhere else. Really, it was a such a blessing, a true miracle that we both happened to be in the same town in the same school — two Muslim brown girls navigating a fun and challenging American upbringing in a hockey-obsessed, winter-laden small town where everybody knew everybody, and thankfully most everybody embraced both our families.

S and I did most everything together — from swimming lessons at the YMCA to playing at each other’s houses to obsessing over Jem and the Holograms (that was her thing, really), to making up stupid games that had us in stitches, to playing Barbies together. For years, S and I had been wrapping our other pale Barbies in long scraps of clothes, fashioning saris for them, or dressing them in the kurta/pyjama sets sewn by our mothers like they sewed for us. (Our moms, especially mine, was none too thrilled by some of the skimpy clothes our Barbies had.)

Now, finally, there was a Barbie with brown skin who was wearing a sari IN THE PACKAGING!

I got that Barbie for my birthday. I couldn’t decide if I should leave her in the box and put her on the shelf for safekeeping, or take her out and arrange her on my dresser for display, or play with her.

Yeah, I played with her.

Representation mattered — and wasn’t seen that much — back then, and it matters now. Barbie continued to come out with other lines of dolls with different skin colors, ethnicities, hailing from other countries, doing other jobs and finally, in recent years, being made in other, more realistic, sizes. Along the way the knock-off Fulla line came out with “Muslim Barbie” dolls (sold at Islamic Society of North America conventions for years) and accessories to appeal to the Muslim girl market, wearing modest clothes and sometimes headscarves. But it wasn’t the same as Barbie.

Of course Barbie is still Barbie — a doll with an impossible figure, overly-huge eyes and an upturned nose who way too many young girls and women emulated over in ways that are unhealthy. But, she’s come a long way from her Malibu-dream house days.

And now, as part of its “Shero” line, Barbie is coming out in 2018 with doll modeled after American Muslim and Olympic medalist fencer Ibtihaj Muhammad – a doll in white fencing gear complete with matching hijab/headscarf.  Barbie’s “Shero” line already includes iconic women like Ava DuVernay, Gabby Douglas and Misty Copeland. And, I am excited, just like I was three decades ago when “Indian Barbie” came out. Writes Alana Vagianos in this Huffington Post article:

Muhammad first made headlines during the 2016 Summer Olympics when she became the first Muslim-American woman to wear a hijab while competing for the United States. She was also the first female, Muslim-American athlete to win a medal at the Olympics, bringing home the bronze for sabre fencing.

“Barbie is celebrating Ibtihaj not only for her accolades as an Olympian, but for embracing what makes her stand out,” Vice President of Global Marketing for Barbie Sejal Shah Miller said in a press release. “Ibtihaj is an inspiration to countless girls who never saw themselves represented, and by honoring her story, we hope this doll reminds them that they can be and do anything.”

In 2016, my then 13-year-old and 8-year-old watched Muhammad with great excitement and admiration as she fiercely fenced for America at the Rio de Janeiro Olympic games. We promptly availed a Groupon deal for a month’s worth of introductory fencing lessons, which has now led to more than a year in the sport. Both kids moved on to the intermediate level a few months back, and our Friday nights are now punctuated by lessons at our local fencing club.

My daughter outgrew Barbies a long time ago, but we are both excited to see Muhammad in Barbie form. Yeah, I’ll be buying one. Maybe two. Because representation still matters, especially seeing a strong, proud, athletic, talented Muslimah honored for doing what she does best — slaying. 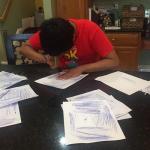 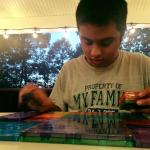 November 28, 2017 Autism, Guardianship and the Words that (Don't) Matter
Recent Comments
0 | Leave a Comment
Browse Our Archives
get the latest from
Muslim
Sign up for our newsletter
POPULAR AT PATHEOS Muslim
1 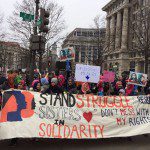 Muslim
Stay Woke: 15 Women and Men on Why...
Muslimah Next Door 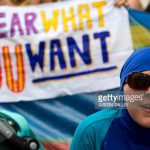 Muslim
Burkini Ban has been Overturned in France: 5...
Muslimah Next Door 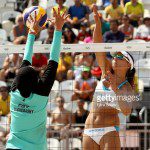