Last week, one of my people had a severe panic attack right before my eyes. It had never happened before, but knowing the symptoms, I knew what to do to help.

I told them to breathe.

Then, tell me what’s going on.

Once I heard the short bursts of explanation. The fragmented thoughts spilling out, I knew this wasn’t something we could fix right away. This was a band-aid action and a treatment plan for what to do next.

I said, “Don’t look at the big picture of this week, look at what needs to be done next. Once you finish that. Then look at what’s next. Do that. Keep doing this until you get to the end of your list. Eat. Sleep and move your body.”

It has been my mode of action for the last 3 days.

Just get out of bed. Get the coffee ready. Get the lunches made. Take care of your people. Move your body. Don’t read anything you aren’t ready to read. Sleep.

Wednesday, I was shell-shocked. I couldn’t believe what happened. I was numb and had I not had this practice of what to do in a state of shock and panic, I would not have been able to leave my bed.

Yesterday morning as I was driving to class, I recognized that this thing I’m feeling is what it feels like inside the cycle of abuse.

You don’t want that person in your life. You have no power to change it. This is the quiet before the storm. You know its coming.

You can’t get away.

People keep saying its your fault. You should have tried harder. You should have done more to keep them out of your life. Now there is nothing to do but try to find an ally. Mitigate the damage. Plan for the day when you can get out.

This is what it feels like to me now that the republican nominee is now the president elect.

He is the abuser. We are trapped. We are circling the wagons, trying to mitigate the damage by finding allies and waiting for the abusive behavior that we know is coming. We are sharing strategies on how to parent our children now that our president elect has taught them that being a racist, sexist, fear mongering, money hungry bully will get you the highest office in the nation.

We are trying to find the way to rebuild the inroads amongst ourselves while finding the strength and power to strategize how we can get free.

This is a far different place than I thought our nation would be today. I saw hope, I saw people of color being treated fairly. I saw refugees and immigrants being embraced for their unique potential; I envisioned a path towards unity. I live and breathe the mantra, Stronger Together every day.

Now I look out my door and wonder, which one of my neighbors thought it was a good idea to elect a president who wants to implement a Muslim registry. A database of anyone who practices Islam, so they can be watched and rounded up whenever he believes we need to be put in check.

Which one of the people I exercise with wants this diverse, beautiful, colorful nation to be cleansed of people of color?

Which one of the children at school will regurgitate the hateful spew that they heard from their parents or their president-elect and hurt my people?

I want them to own up to their vote. I want to know who they are under their hoods.

In the grocery store yesterday, people I would normally chat with, would not look me in the eye. They looked past me and made it clear I was not welcome to talk. I want a sign, a button, a shirt I can wear that tells them its not me. I’m not that Klan member hiding in plain sight. I’m an ally. I listened. I amplified. I volunteered. I registered people to vote. I talked to people about what it would mean if the republicans were in control of The White House as well as the House and Senate. I told them who was against women. I told them who was against non-Christians. Who was against science and who wanted to continue being paid for not doing their job. I said, “Do your DUE DILLIGENCE before you go to the polls.” I shared sample ballots. I reminded people to register to vote. I offered to drive people to the polls. I told them about early voting. I was a proud advocate.

Its not me that did this. I did my job. I will continue doing my job. I will do the next thing and then the next and keep doing the list of things until I can take a deeper breath. Then I will work harder so we are ready to escape in 4 years.

Here are some links where I’ve found help. 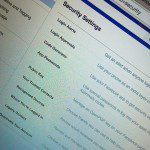 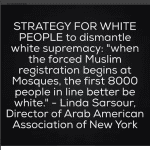