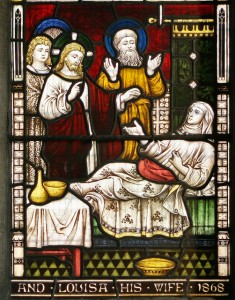 29As soon as they left the synagogue, they entered the house of Simon and Andrew, with James and John. 30Now Simon’s mother-in-law was in bed with a fever, and they told him about her at once. 31He came and took her by the hand and lifted her up. Then the fever left her, and she began to serve them.
32That evening, at sundown, they brought to him all who were sick or possessed with demons. 33And the whole city was gathered around the door. 34And he cured many who were sick with various diseases, and cast out many demons.

That famous yet fictional saint of the church, Homer Simpson once said Well, I may not know much about God, but I have to say we built a pretty nice cage for Him.

So, we’ve been slowly making our way through Mark’s Gospel since December and our reading for today starts exactly 26 verses into the book. Here’s a little re-cap to catch you up to speed: The Beginning of the Good news of Jesus Christ.  John the Baptist appears in the wilderness with his questionable wardrobe and dietary choices and baptizes Jesus. Heavens torn open.  This is my beloved. For which Jesus is rewarded with 40 days in the wilderness with the wild beasts and angels. Repent and believe the good news of the kingdom.

On his way to Capernum he picks up some stinky fishermen.

Then on the Sabbath he’s teaching in the synagogue – and everyone’s like “wow.  That Jesus isn’t totally full of it like the other guys” Finally he casts out an unclean spirit after commanding it to shut the hell up.

And that’s pretty much where we pick up the story today.

As soon as they leave the Synagogue they entered Simon’s house and Simon’s mother in law was sick in bed with a fever. Jesus came and took her by the hand, lifted her up.  Then the fever left her and she began to serve them.

For the record: Feminists hate this verse.  Well, at least my first reaction to this text is “of course” – Rather than scrounging around for their own lunches they heal the woman of the house so she can serve them.

So don’t feel bad if that’s how you heard this story too.

But I started to see the healing of Simon’s mother in law story differently after sitting with it awhile.

It’s true that Mark doesn’t tell us her name so lets just agree to make one up for her so she has an identity other than mother in law.  We’re going to call her Lois.

See, I don’t actually think Jesus healed Lois so she could make them lunch.  Because the thing is, for a male Jew in 1st century Palestine, it was considered taboo to even touch an unrelated woman.  And it was considered unclean to touch someone who was sick.  And it was considered a religious violation to do any kind of work on the Sabbath.  So I can’t imagine that Jesus would defile himself on so many levels just so he wouldn’t have to make his own sandwich.  I think this scene with Lois is a demonstration of what Jesus was talking about 11 verses earlier when he spoke for the very first time in this Gospel and said the kingdom of God has come near – repent and believe the good news.

In Marks Gospel it’s like Jesus starts his ministry by trying to shake our religious etch a sketch .  All those lines we draw between us and God, us and other and others and God….all the cages we can construct through religion well…Jesus shakes them and they disappear.  Of course I have my hands on the knobs ready to keep drawing more lines so you know…that keeps Jesus pretty busy.

Jesus starts his ministry by saying forget what you thought you knew because God is near in a whole new way and then he goes on what is like the weirdest recruiting trip ever. It looked like this:  Jesus starts by gathering up some rank smelling fishermen and then enters the synagogue with them where his next recruit is a demoniac.  After which he makes sure he gets a sick old lady on his team. It’s Jesus dream team. With most of the characters who only show up for a verse or two we never find out what really happens after they encounter Jesus, But that’s the cool thing about Lois, see…when Jesus reaches down and touches what his culture had deemed unclean – when his hand touches a sick old lady more than just a fever leaves her.  The cages of culture and religion fall away and the world according to God bursts through.  And the thing I love about Lois is that Lois knew what you do with hands which have received the healing touch of God….Lois used those very hands to serve. She immediately became an agent of what she had just received: grace and mercy and healing. Not as and act of obligation, or law or social expectation but as an act of freedom. Because the boundaries that Jesus transgresses allows the most unlikely and broken people to give what they have received. We see again and again Jesus literally touching the untouchable and giving them a whole new identity. It’s like he was deputizing them. Because Jesus was about more than just healing certain sick people…the gospel tell us that Jesus greatest desire was to restore all that has been broken.  So every person who Jesus healed was conscripted into the Kingdom of God so that they may go and do likewise. It’s like a spiritual pyramid scheme.

This is why the next part of the text is so great.  It says that evening they brought to him all who were sick or possessed with demons. The next verse literally says this: the whole city was gathered around the door. There is no separate category of people called the sick and possessed. Jesus knew this. Some people just hide their sickness more than others and as human beings we prefer to have certain people be the identified problems so that we can look healthy or sane or good.  But Jesus shook that etch a sketch.

When Lois sees a whole city’s worth of sick and demon possessed outside her door, I like to imagine her pushing up her sleeves and touching and healing and loving and speaking truth to all of them.  She transmits what was given to her.  She gets up and serves. She’s been deputized.

That’s the thing with the kingdom of God, there is no personal treasure to be had…there are only gifts to be shared.  God’s desire for the wholeness and healing of all creation was inaugurated in a world changing way in the life of Jesus and it continues through you – through the hands on which rest the waters of baptism and the hands which, when extended at the Eucharistic table, receive Christ’s own body and blood.  Your hands are what God has to work with here.  Hands that, no matter what your story is, have as much to receive as they have to give.  Just by merit of being here, you’ve been conscripted into this beautiful, redemptive story of God’s love for all of humanity along with smelly fishermen, demoniacs and sick old ladies and the rest of Jesus dream team. And God wants you to be healed for the sake of your own wholeness but also because there’s a lot of healing to be done out there.  The kingdom of God has indeed come near. So rethink the cages and believe the good news. Amen.

(during Open Space, a 10 minute time after the sermon where we reflect and respond to the Gospel, we had a couple healing prayer stations set up where people were prayed over and their hands blessed and anointed with oil.  Then they changed placed and did the same for the next person) 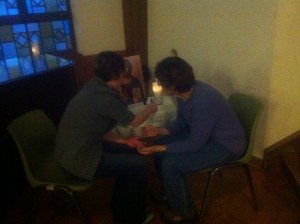 February 3, 2012
I love Jesus, But I Swear a Little: An Open Invitation to Unfriend Me on Facebook, Stop Following Me on Twitter and Discontinue Reading My Blog if You Need To.
Next Post

February 13, 2012 Apparently HFASS is an example of the horrible things that go wrong when women become pastors
Recent Comments
1 Comment | Leave a Comment
Browse Our Archives
get the latest from
Progressive Christian
Sign up for our newsletter
POPULAR AT PATHEOS Progressive Christian
1

To Those Christians Who Say, "God...
The Official Blog of Benjamin L. Corey
Related posts from Nadia Bolz-Weber