Visiting The Temple of Sekmet Near Las Vegas 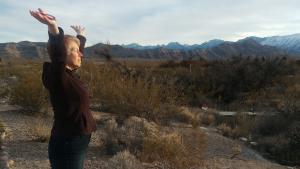 Every year we travel around the South Western United States. I preach each Sunday at a different UU congregation, offering retreats, and meeting with folks for Spiritual mentoring. This year we took a side trip to visit the Temple to Sekmet North of Las Vegas, NV.

I will share a bit in other blog posts about the visit to Sedona, Grand Canyon, San Xavier Du Bac, and other locations in this 2018 trip, this post is about Sekmet and golden hour in the Nevada desert.

You can learn about the founding, funding, staffing, and story of this temple from their web site.

Hawthorne and I drove up mid-afternoon on a late January day. It was breezy and low 70’s. The sun was out (Yay! Sun! That’s part of why we were down there… it will be GREY back home in the Pacific “NorthWet” until late Spring.)

Despite careful directions shared by the caretaker and priestess over the phone, we almost missed the exit. The temple is close to the Missile Test Site and Creech Air Force Base. Like Seneca Women’s Encampment near the Upstate NY Seneca Army Depot, I expected a theme of defiance and opposition. I was happily disappointed! The Temple is not existing in opposition to the military. My sense is that though the peace of the land is a contrast, it is not defined by the military base and former missile test site near it. 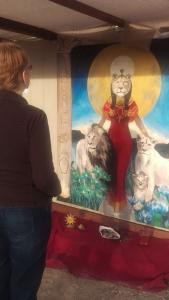 Right away a beautiful black cat came out to visit with Hawthorne. We were missing our kitty back in Portland. It took me a while to connect the obvious… Sekmet is a CAT Goddess. LOL How appropriate.

This site is well taken care of. It is the desert so the colors and landscape are a little strange to my forest-adapted Oregon-eyes. The caretakers were clearly giving it love: no trash, little signs of tending along the paths and in little shrines.

The grounds are minimally accessible to people who are mobility impaired. The desert actually helps in that respect, here in the Pacific Northwest mud and fallen trees are constant sources of obstacles.

The outdoor conference area looked well appointed and inviting for mild Fall-Spring days. And then the path wound around another corner.

A painting of Sekmet on the side of a shed was brightly lit by the lowering sun. 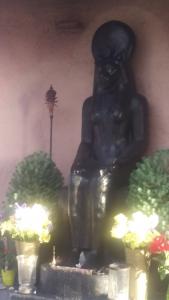 Inside the Goddess is represented by Sekmet, the Madonna, an Earth Mother and other smaller myriad goddess images. The ground was tiled with flagstone and colored rock and glass beads. 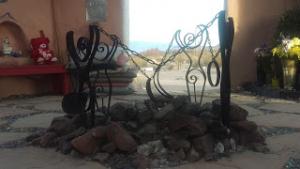 Inside, a fire circle is ready for rituals. Each stretch of chain protecting the fire circle represented a phase of the moon. 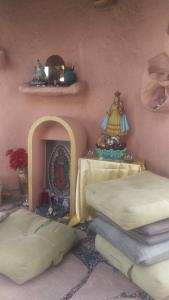 The Madonna was present in many variations and meditation pillows abound. 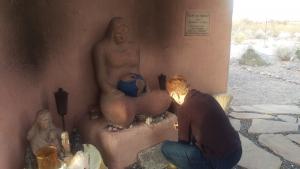 Standing inside the temple

Reflecting on the earth goddess statue, I shifted from idle curiosity to a sense of deep appreciation and reverence. Peace moved through me and I paced slowly, meditatively around the fire pit enjoying the glitter of the stones and the details of the goddess figurines and statues. Incense invited me to move deeper into the experience and I lit some and knelt before the earth goddess receiving the opportunity to feel at one with the cosmos. 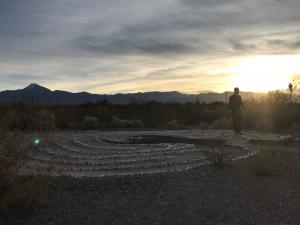 Another devotee approached and I put out the incense, drew some symbols I find sacred on the stone, and left the structure to face the sun. Time for the sun salute!

While the new arrivals got to work watering plants and neatening the space, I moved along the trail to enjoy a slow stroll through the labyrinth. 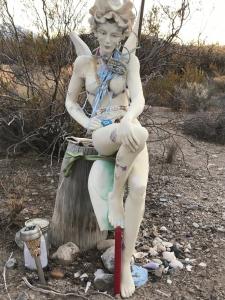 Then, Oh! Delightful: a collection of shrines to the fairies and nature spirits!

Also on the grounds we saw a small performance area and a council circle. 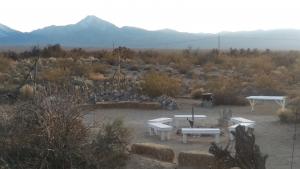 Parking near the temple was ample for large gatherings. Next time we are in Las Vegas we’ll check to see if anything is planned and make a point to join with others to commune with the land and the peace and healing of the Goddess energy. Thank you Sekmet and the Priestesses of the Goddess Temple! 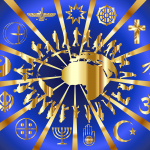 March 3, 2018
A UU Pagan At An Interfaith Prayer Breakfast
Next Post 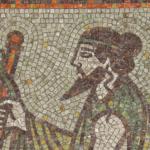 March 8, 2018 Asklepios and Nepenthe
Recent Comments
0 | Leave a Comment
Browse Our Archives
get the latest from
Nature's Sacred Journey
Sign up for our newsletter
POPULAR AT PATHEOS Pagan
1 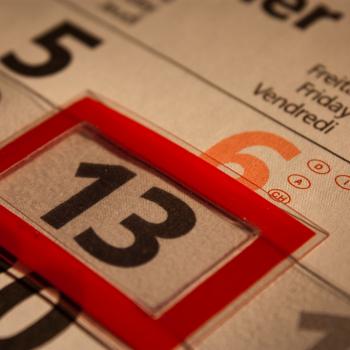