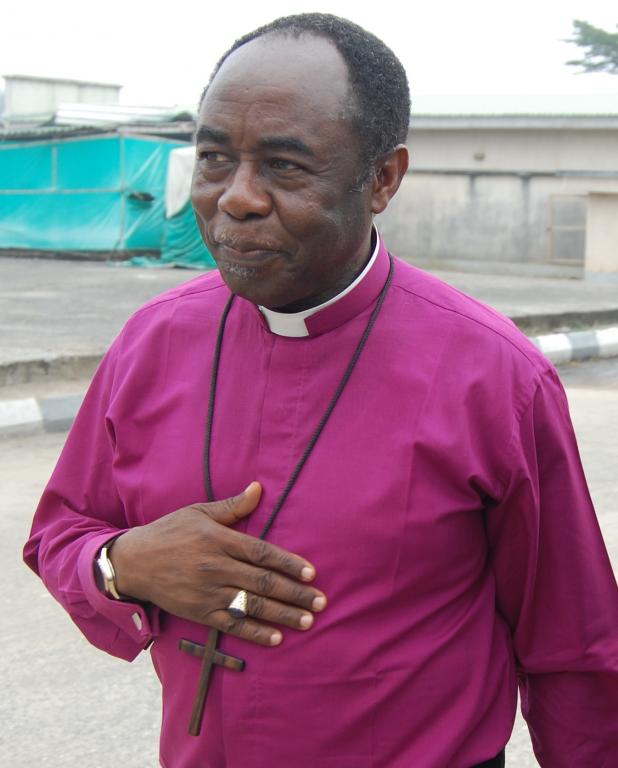 I was driven to the Archbishop’s office by Rev. Hassan John, the Oxford-educated Anglican priest who has worked alongside the Archbishop to help victims of the violence in Jos against Christians.  Both Rev. John and AB Kwashi have been interviewed extensively by the BBC and CNN about the crisis.  Rev. John is a principal source for Baronness Carolyn Cox, who has spearheaded two sessions devoted to the Jos violence in the House of Lords in Parliament, one last week and one to come in the next days.

AB Kwashi seemed calm and joyful when he greeted us today.  One would never know that just the night before last, his own compound was attacked, all his cows stolen by Fulani raiders, and his neighbor murdered while trying to protect his friend (the Archbishop). The terrorists seemed to be sending the Archbishop a warning.  When we came to his door, Kwashi was saying goodbye to the leader of another Nigerian network of churches.  They joked about their days in seminary together. After he left, we sat down in a spacious office..

Your grace, you were attacked the other night for the third time.  Some think the Fulani are targeting you.  Are you afraid?

I am not afraid to die, I continue to live my normal life as you have seen but I do nurse the fear that I might get killed. My sure faith, however, is that until my time is over and assignment completed nothing shall yet happen to me. So I live between these tensions.

Archbishop, you have just released a new book, Evangelism and Mission: Biblical and Strategic Insights for the Church Today (Africa Christian Textbooks).  Why did you write this book?

I wanted to give pastors a book they could use.  No one has any business being a priest if he does not do the work of an evangelist and missionary.  That is what we are called to first and foremost, to be missionaries.  This book tells them how to do this.

In 1992 when I started as a bishop, most Anglican pastors in this part of Nigeria were doing “church” in a way that was alien to what I had learned from my own experience of planting churches.  They had no understanding of the church as a vehicle of salvation for people who did not have the gospel.  I had been teaching and doing this for years.

Once they started seeing how we do this in rural areas, there was a domino effect.  We sent teams out without cars or bicycles, with just enough money to buy transport.  They had to minister by faith, and see God provide for them.  It was crucial to their learning how God meets their needs day by day.  They learned what Anglicans should mean by “apostolic succession”—planting churches from scratch like the apostles did.

I also wanted to explain in the book why we must not make the mistake of the early African church, that lost North Africa to Islam.  That church did not do enough mission.  We must not make that mistake.

Just like the early church, we are being persecuted.  When I became bishop 26 years ago, I inherited a persecuted church.  I had no intention then to let the church lose steam, and I don’t want that happening now.  We must not be afraid or lose confidence, but plow ahead with mission in the midst of persecution.

There was never a time when the apostles handed over anything but a hot potato gospel, one that was sizzling with excitement and power.  Woe unto us if we ever become lethargic.  I will not let that happen in my Archdiocese.

You have just been elected as General Secretary of GAFCON (Global Anglican Future Conference).  This network contains the majority of Anglicans in the world, which has led some to say that you now have more power than the Archbishop of Canterbury.  How do you feel?

I am confused, I don’t know for sure what this will all involve. I have huge respect for Peter Jenson, the previous General Secretary.  I need to sit with him and others to ask what this means.  As I get emails from around the world about this new position, fear begins to grip me.  The General Secretary must give directions to an office and staff.  I am willing to learn, but like Nehemiah must have felt, sometimes I wish it were someone else.

What are your goals for GAFCON?

We need to fulfill the vision of Lambeth 1.10 [that took a stand for biblical authority in Anglicanism, especially regarding marriage and sexuality].  We need to regard the slightest deviation from that as unfaithfulness to God.  We need to call our Church’s pastors to teach it and live it.  This means living the Scriptures in love and truth, drawing all men and women around the world to salvation.

What are GAFCON’s greatest needs?

I have not had time to assess all of its needs, but I can tell you one.  We need to be understood.  Recently there has been a campaign of calumny against it.  No surprise in this, because this is an age of rebellion against God and His Word.  But the media has snatched onto this negative campaign and fanned its flames.  The

press have used church leaders—ordained men of God—to label us as “homophobes” or “Islamophobes.”  Unfortunately these church leaders are used by the media to criticize us.  They have been intimidated by the strong pressures of the media, and they bow to the spirit of the age.

Some of these church leaders fear that we are schismatic.  They do not explain clearly what they mean, but they have tagged us with that label.  Yet we insist, as our GAFCON communique stated, that we are not departing from the Anglican Communion.  Instead we are reclaiming its orthodox tradition.

This is why it is difficult for Scripture-believing Anglicans to identify fully with these critics of GAFCON.

Will GAFCON be able to join forces with the Global South

I think it is a matter of time.  We will cooperate.  The Global South was made up of those Anglican provinces who did not want the West setting their agenda.  It started in 1988 at Lambeth.  The “Decade of Evangelism” had been declared, and it seemed that only our provinces in the Global South were taking it seriously.  This new network was formed from within the Anglican Consultative Council (ACC), and still operates there.  Some feel it might have to separate itself from the ACC.

What gifts do the Nigerian churches have to offer to world Christianity?

Nigerians are enterprising.  They are entrepreneurs.  They are not afraid of racial barriers.  Since we were not colonized in the worst ways, we do not defer to what some might call “racial baggage.”  We have the confidence to do new things and develop new ways of incarnating the unchanging gospel without letting “racial tension” get in the way.

What do Nigerian Anglicans have to offer Nigeria?

Nigerian Anglicans have sound biblical theology.  They are theologically trained and serious.  Nearly every Nigerian university has a Department of Christian Theology with Anglicans in leadership—in systematic theology, Christian education, Christian counseling, and other fields.

Anglicans publish widely, more than any other Christian group except for Catholics.

They also provide leadership in every state in Nigeria.  The training given Anglican bishops makes them important voices who are listened to in every political debate.  Anglican and Catholic bishops are always respected in public debates over political problems.

One imperative for us Anglicans, however, is to invest more in entrepreneurial and capital development.

What are the greatest needs of Nigerian Anglicans?

We need to get pastors to get to the next level of theological education.  Right now we are pretty good at training pastors to do mission, lead Bible studies, and preach well.  But we need to go beyond this, to learn how to think theologically about the challenges flooding into us from Western secularism.  We need Nigerian J.I. Packers, John Stotts, and Ravi Zachariases.

Most of our pastors have seminary certificates and degrees, but we need deeper and more penetrating theology to respond to the new liberal and secular agendas coming through the media.

How would you describe the current state of the Anglican Communion?

The Communion needs to be clearer about what it believes and what it will do.  Will it remain faithful to God’s mission?  Some in the Communion give a fuzzy answer to this question.

The problem is that those who reject Scripture are louder and have more money.  The media love them.

Those who believe in orthodoxy don’t get favorable questions put to them by the media.  They are always put on the defensive.

There is no real schism caused by GAFCON.  The real problem is that one group submits to the latest media demands and therefore attacks the other group, which is larger.

But the future is bright.  The orthodox in the Anglican Communion outnumber those who have rejected orthodoxy.  Those who have gotten too comfortable have been given a jolt.  Hopefully they are asking, Am I doing the will of God?

Some need to stop assuming that being Anglican by affiliation alone makes them superior to others or guarantees them a place in heaven.

Some Anglicans seem to ignore Anglican distinctives like liturgy and sacraments.  Is there a danger that this kind of Anglicanism will become just another evangelical movement, indistinguishable from others?

No.  Part of the beauty of Anglicanism is that these voices are heard, and always will be.  They will challenge us from within and remind us of the full beauty and power of Anglicanism with liturgy and sacraments.

Many Nigerians fear civil war, especially if the current government continues to ignore Muslim persecution of Christians.  Others think the country will devolve into anarchy.  Are you pessimistic?

Although it is difficult to say what will happen, I am generally optimistic.  The Nigerian armed forces and security forces are very capable.  They have proved themselves, with distinction, in UN and pan-African military campaigns in Liberia,  Kosovo, Lebanon, Guinea, and the Congo.

The officers in the Army are well-trained.  Most have university degrees.

If there is political will from political leaders, the military is perfectly capable of handling all this violence.  Without that political will from above, however, things could get worse.  There is now sufficient confusion to give that impression.  But I do not foresee an imminent war.

How should the Nigerian churches prepare?

Right now we are asking for protection and justice, which are due us.  These are what the politicians have sworn they will provide.  We shall see if they will fulfill their promises.

The church has never been able to prepare for new crises.  We have usually been unaware of them until they have engulfed us.

But I am hopeful.  The Lord will help us.

July 3, 2018 Jos Muslims talk about the violence
Browse Our Archives
get the latest from
The Northampton Seminar
Sign up for our newsletter
POPULAR AT PATHEOS Evangelical
1

The 2021 SBC and the Cost...
Anxious Bench
Related posts from The Northampton Seminar 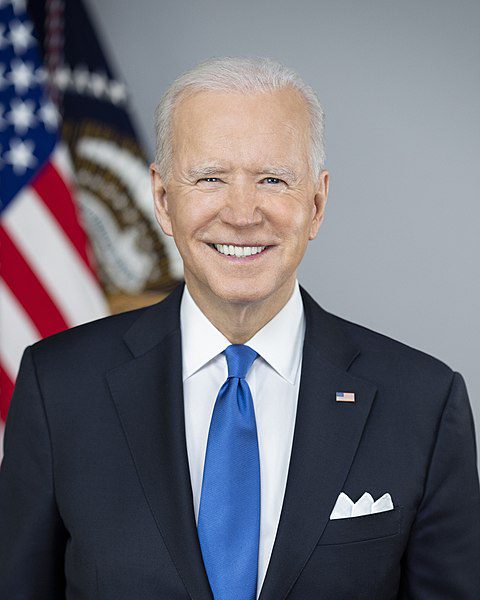 Evangelical
corrected version of Touchstone review of Race and...
The Northampton Seminar
TRENDING AT PATHEOS Evangelical

Anne's Quiz To Help You Figure Out If...
Jesus taking the NYTimes quiz to find out whether or not he...
view all Evangelical blogs
Copyright 2008-2021, Patheos. All rights reserved.