Dating the Witch. Or Not. 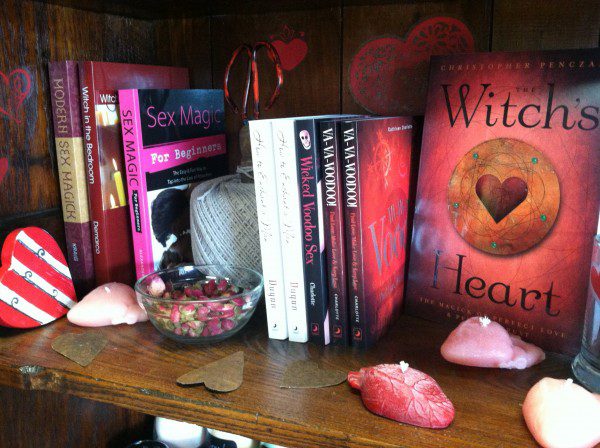 I love stories about witches, werewolves, vampires, and basically anyone with magical powers. I poured a lot of my childhood energy into fighting (imaginary?) demons, trying to start fires with my mind, and figuring out how to really transform into a werewolf. I was routinely irritated and mystified by protagonists who spent a lot of time bemoaning their specialness. In these genres, there are an awful lot of Chosen Ones fighting against destiny, just wishing they could be like everyone else. It was downright infuriating for someone who couldn’t, in fact, start fires or move objects with her mind alone, who doesn’t come from a long line of powerful witches tied together by bonds of blood and magic (or whatever), and who can’t live forever, transform into an animal, or indiscriminately eat villagers (at least not as far as you know, dear readers). Oh poor you, I always thought.

Now, though, I sort of get it, though it’s less about having superpowers (again, as far as you know) and more about the obligations that come with practicing Craft and being part of something that’s bigger than just me. Sometimes, especially as I get older, I wish I could just be more like some of the other “regular” people in my life.

I’m a witch and that, I think, is necessarily an outsider position. Being outside is sometimes pretty lonely.

This is never more true for me than on those rare occasions when I try to date.

Dating is pretty hard for anyone, but being a witch brings a set of unique challenges. I have fantasies about a partner who could also share my responsibilities in Foxfire. I hope for someone who shares my animal affinities, thinks it’s perfectly reasonable to consult the runes, and agrees that I don’t have nearly enough jars, knives, or skulls. Why, yes, my dear, we should use the summer to roadtrip to Pagan festivals, hike through the wilderness, and experiment with that grimoire you found. Let’s do it. Don’t forget to pack the leather and chainmail.

I’m the product of my upbringing and my culture, and as such I acknowledge that many of my desires are socially determined. Largely, we want what we’re conditioned to want. I’m also subject to the biological impulses of my body, which I don’t pretend to understand. I’ve never wanted children, but since I hit my late twenties it’s like I can’t go anywhere without my primal-lizard-brain tugging on my sleeve (or my uterus?) screaming WHAT ABOUT HIM HE LOOKS LIKE HE’D BE A FUN DAD. I realize—all day—that I’m falling prey to a patriarchal, heteronormative, white, middle-class fantasy that ultimately represents a significant kind of social violence.

But there it is. Sometimes I want it anyway.

As frustrating as it is for me, I’d be lying if I said I didn’t sometimes long for a family that was more Norman Rockwell and less Wicker Man. I’m sometimes envious of my married friends. I periodically (drunkenly) entertain fantasies about raising Pagan children. When I strike out on the dating field, I sometimes feel a little sad and wish that I could be more like my coworkers, my classmates, or the women sitting at the other tables in the café. I know that it’s all a fantasy—my perceptions aren’t reality and “normal” is mostly a lie—but I’ve never seen anyone else here reading about preserving dead animals for magical purposes or creating sigils for use in some later ritual.

There’s a large faction of people pushing for the representation of Wicca as just another religion, sharing themes and values on par with any other and warranting the same sort of consideration. Even in non-Wiccan kinds of witchcraft, I often see the assertion that witches are “just like everyone else”—nothing to be afraid of, just like you, could be your neighbors, perfectly normal.

I disagree with this position.

I don’t think any definition I could come up with would be totally satisfying, but whatever witchcraft is, I’m sure of this: it’s not just like what everyone else is doing. I don’t think we should be striving to normalize it and make it look like mainstream religion (or maybe religion at all, whatever that even is). I don’t want witchcraft that sets people at ease and looks at home in a UU church. I don’t want witchcraft that I can just pull off a shelf at a Barnes & Noble like a copy of the Bible or a self-help book. I don’t want to reassure people that I’m safe.

There are plenty of people practicing different kinds of witchcraft that manage to live idealized lives: conventional nuclear families, white-collar jobs, sweater sets. I just don’t think I can be one of them, even though sometimes I want to. Witchcraft requires too much boundary crossing for me. It’s too messy.

So when I’m having what I’ve come to think of as a “Buffy moment” (Oh, poor me, I’m the Slayer, why can’t I just go to prom like a normal girl and not have super powers), I consciously sit down and consider what my life would look like without witchcraft.

And it’s just not appealing for me.

Ultimately, my Craft is core to who I am. Anyone who can’t appreciate that isn’t worth my time or effort. I made the mistake once of toning things down (i.e. quitting), leaving my group, and, essentially, being someone else for the sake of a partner. That relationship was doomed from the start, though it took me three years to let it die. The whole time, I felt like a huge part of myself was drowning. In more recent years, I’ve found it challenging to find potential partners who are supportive of my position as a Gardnerian covenleader, even (and maybe especially) amongst other Pagans. They’re uncomfortable with the secrecy, the feeling of exclusion, and often have some pretty unsettling notions about what we’re actually doing with each other in those closed spaces (“Sorry, honey, that’s oathbound.”).   It’s a challenging position for everyone involved, and there isn’t a clear solution. But it’s not something I’m willing to compromise. I’ve done that before, and it blew up in my face.

So I light the fire, slather on some ointment, greet my witch familiars, and remember what’s really important to me.

August 2, 2015 My Double Life: Secrets, Closets, and Public Witchcraft
Recent Comments
0 | Leave a Comment
Browse Our Archives
get the latest from
Oathbound
Sign up for our newsletter
POPULAR AT PATHEOS Pagan
1

Why No One Loves Lammas (&...
Raise the Horns
Related posts from Oathbound