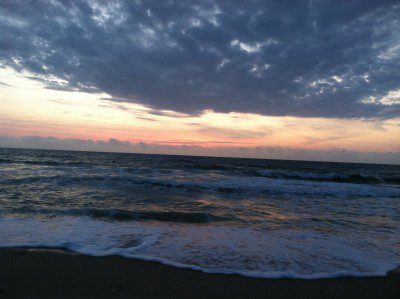 I’m in Florida for a few days, taking advantage of my teacher schedule and using spring break to visit my own high priestess and high priest. They moved here a few months ago and this is the first chance I’ve had to really spend time with them. I brought two of my initiates with me, always keen to help them build relationships amongst family. We’ve circled, we’ve shared tiki drinks, we’ve been tossed in the surf, and we’ve remembered why we do any of this at all. I also had a brief but exciting encounter with a Portuguese man o’ war—the result of curiosity and my trademark lack of caution (safety third). Whoops.

It’s been a good few days, with many cups emptied and filled, in every sense of that phrase.

What I haven’t done is get angry or self-righteous on the Internet.

I haven’t spent any time worrying over whose initiation is or isn’t valid, whether or not anyone else’s magical practice lines up with my own, or turning red over whether or not anyone thinks about gods the way I do. It’s not that those things don’t sometimes have a place and a function for some people. Sometimes, those conversations are just interesting.

I feel like my voice is noticeably absent from some conversations and some forums. I’m sometimes asked to share my thoughts on various Craft issues, various political and social issues, or sometimes just local drama. Sometimes I feel motivated—even obligated—to respond. In the event that I really do have strong opinions, I’ll usually find some way to express them, even if it’s just within my own coven. When I’m silent, it’s usually because something else is more pressing. In my adult life I’ve learned this:

Anger is a powerful, essential tool for change. We need it. But anger is also something that has to be directed in order to be productive. It can’t just be flung around wantonly. And, at least for me, I find anger is a finite resource.

It’s a Maslow’s hierarchy thing. The sort of things that make you angry say a lot about where your life is situated. What pisses us off says a lot about what we value, what we notice, and what impacts us most immediately. I can see from a distance that some issues are critically important for some people, but I just don’t have enough anger to go around. Other issues are more pressing in my daily life. That’s not the same as saying that a thing isn’t important or that I’m unaffected entirely. I just don’t have time.

I’m a public school teacher.  I’m busy being pissed off about the achievement gap, the lack of funding for public education, and the rising number of homeless children in my classrooms. Those are daily realities that have painful consequences for me and everyone I spend my day with (almost all of whom are under twelve)—more so than almost everything else I see Pagans getting mad about on the Internet. I spend every day with children who can’t count on being fed once they get home (if they have homes). Almost all of them perform below grade level, with no hope of catching up to their wealthy peers, not because they’re incapable but because the right people don’t care about them.  There are cops and DSS agents everywhere constantly.  My kids deal with neighborhood violence, racism, familial abuse, and neglect.  Many come in and out of school, dependent on families that migrate to find work.  Many don’t speak English.  Many would be as brilliant as their peers in wealthier districts, if only they had the same kind of access to resources and the same kind of educational support.  And, to be clear, my kids are not anomalies.  My situation is the norm for new teachers in North Carolina (and plenty of other states), and it’s only getting worse.

All of this before we even begin talking about teacher education, pay, and retention.

So when I get home from work, I don’t care about whatever Pagan whoop-de-doo is blowing up on Facebook. Some of it might even be genuinely important in the right context, but I don’t have enough anger. It’s already been directed elsewhere. I could generate more, I suppose, but I’d just exhaust myself to the point where I wouldn’t be able to do anything about those issues that are important to me. You have to pick your battles. No one’s army is big enough,

I’m bringing all of this up because—as much as I love the Pagan Internet—there’s a much bigger world out there. I often see disconnects between the things that people care about online versus the things they care about in meatspace. If you just get on a site like Patheos, Paganism looks likes a particular set of people with a particular set of concerns. And this isn’t necessarily reflective of Paganism broadly. Pick a different site and Paganism looks different still.

And sometimes I hear things like, “Yeah, I don’t want to get involved in the Pagan community [online/in my city/etc.]. Who needs the drama?”

Somewhere along the line, this is a reputation we picked up.  It’s too bad, is all.

And usually when we talk about “drama” we mean someone’s angry about something that we don’t think is important. It’s a way of discounting people’s feelings, and it’s often unfair.

“Drama” is the noise that results when everyone is shouting about everything to the point where we can’t give any single issue real consideration. Some of those issue are really important—they require our anger and our time—but others are just noise. No one gets to decide which is which, but it’s good to bear in mind the difference when you yourself are running out of anger.

Jason Mankey beat me to the punch here, so clearly we’ve had similar things on our minds lately. I’d wager that others have, too. I’m not trying to harp on any one community. I agree with Jason that there’s so much positivity, especially here on Patheos, but it often gets flung by the wayside in favor of whatever article is sure to raise the most hackles. I also don’t think the issue is so much about being Pagan as it is just being human. It just seems to be something that we do, no matter what groups we belong to. Finally, I’m not saying that we shouldn’t be angry about things that warrant anger.

But just the fact that I always have to attach disclaimers about what I’m not saying in the hopes of diffusing the angry e-mails that I get Literally Every Time I post about anything is evidence of what I am (actually) talking about. What I am saying is that anger doesn’t have to be such a fundamental part of anyone’s experience of being Pagan. Jason provided some great (and simple) ideas for things we can all do to remind ourselves of what’s really important. I’m doing some of those things this week.

Well, once I finish researching whether or not it’s true that urine can counteract a jellyfish sting.

April 12, 2016 Doing Other Things: Magic, Mundanity, and a Marathon (Well, a Half)
Recent Comments
0 | Leave a Comment
"I think I'm pretty much on board with your main points here. I just finished ..."
Daniel W Secular vs. Religious: Making Distinctions as ..."
"Hmm. Claiming to be an Expert is, IMHO, an invitation to the Gods (choose your ..."
Kyllein MacKellerann " Don’t Be an Expert Witch: Expertise, ..."
"I'm older than you and I have not hear of some of them. Moreover, when ..."
Tia_Edwards The Hipster Witch: Aesthetics, Empowerment, and ..."
"She joins a lot of Pagan/witchcraft groups to promote her books. I have heard of ..."
Tia_Edwards The Hipster Witch: Aesthetics, Empowerment, and ..."
Browse Our Archives
get the latest from
Oathbound
Sign up for our newsletter
POPULAR AT PATHEOS Pagan
1