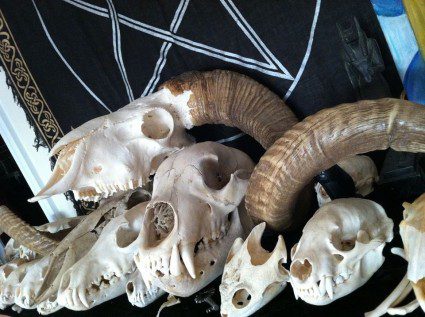 It was 1999 and I was finally a high schooler. Finally. A new school, new people, and an opportunity for reinvention. I was going to make this first week count. New clothes, new backpack, my first tube of concealer, and even a new pentacle necklace. Everything would change. I was becoming. High school would be different. I could feel it.

Oh no. Spotted.  Before the first bell, even.

The girl had dyed-black hair and a hoop through her eyebrow. Definitely an upperclassman. Her burgundy Doc Martens made my blue Keds seem positively babyish and I was instantly a middle schooler all over again.

“You like NIN?” She pronounced the acronym phonetically, and I glanced at the Nine Inch Nails patch freshly ironed (by my mom) onto my backpack, flung at the base of my new locker.

Oh thank god. Recognition. Maybe she would be my friend. I recovered momentarily at the prospect.

“Yeah! Have you preordered The Fragile? It’s still, like, forever away.”

“So…if you like NIN, what’s with the Old Navy shirt?”

Well fuck. There went that.

I was called out right away. Not because I’d said anything stupid, marking me as a dilettante (she should have at least listened to my solo guitar rendition of Head Like a Hole, which is still awesome, if I may say so), but because I didn’t look like a Nine Inch Nails fan. I didn’t possess any of the superficial markers that would convey my authenticity to someone like the black-haired angry girl blocking the hallway. I was embarrassed, but mostly confused. Who cared about my shirt? What about the music?

I have flashbacks to this moment—maybe forty seconds out of my whole high school career—every time another witch tells me that I’m not really practicing witchcraft because, essentially, I’m not scary enough.

“Real witchcraft is grimey and gory.”

“Real witches have skulls on the altar to talk to the dead.”

“OMG the spell I did last night involved so much blood/piss/demons!”

Often, these statements aren’t really there to tell anyone anything useful about witchcraft. They’re there to disparage other kinds of witchcraft. It’s one thing to try to educate someone about your Craft—whatever that may entail—but it’s quite another to toss in caveats about realness, as though that’s objectively a thing and not a social construction that moves according to whatever agenda is at stake.

Musical genres tend to go hand-in-hand with clothing styles and attitudes. I went through high school constantly in this weird defensive state where my musical tastes were concerned. I wasn’t one of the goth kids, even though I listened to the same bands and privately indulged in the same literary melodrama. I wasn’t aggressive enough for the metal kids. I wasn’t allowed to pierce anything, and my mom still had final say over my wardrobe, so I definitely didn’t fit in with the punk kids, even though I played in bands with half of them before graduation. All that emphasis on outward appearance made for a lot of unnecessary anxiety.

Similarly, “real witchcraft” has an aesthetic, whether or not we consciously mean to create one. There are earmarks we look for, and those become more prominent as the trend becomes further entrenched, particularly in Internet culture. Skulls, bones, blood, poison, madness. None of these things are in and of themselves witchcraft, but increasingly they come to symbolize it. Using blood titillates, and it marks Craft as “authentic” so we hardly even bother to ask ourselves whether or not the blood is actually necessary. Nevermind where the bones come from and how they were acquired, just having them on the altar lends the work a certain feeling that makes it “real.” Sure, spend your time and money hunting for that only piece of European mandrake on Etsy, whether or not it actually bears any connection to an American witchcraft. Hey, have you tried that commercially available flying ointment? It’s back in stock. Better hurry before it sells out again.

We hardly stop to wonder whether or not we should—and why—before jumping into something, purely in pursuit of that feeling of achievement at having found something authentic. We know that “real witches” work with the dead (whatever that means, depending on who you talk to), but we don’t always stop to consider if that’s the best course of action in any given situation. “Real witches” are rooted in secret histories, so we manipulate our family trees and take scholarship out of context, drawing flimsy parallels to make ourselves feel legitimate. We rarely stop to ask why that sort of history should mean anything at all.

I’m not opposed to these aspects of the Craft. Sometimes witchcraft is—has to be—these things. This isn’t a squeamish Wiccan crying out against blood and guts. But I want to suggest that, because the blood and guts are exactly as potent as “real witches” say they are, maybe they should be treated with more care. When we’re constantly peeing and bleeding on things, bodily fluids just don’t seem quite as significant. Maybe it’s just me. At some point, all of that obsessing over seeming “real” starts to look pretty absurd, especially when so much of that effort is just posturing directed at other witches. As though other peoples’ Craft could have any real bearing on your own.

So I don’t look scary. My mandrake is really mayapple and I don’t own enough skulls. You see another witch choosing to focus on crystals and earth goddesses, and you scoff. She’s got the patch on her backpack, but she doesn’t match your criteria or meet your expectations. And if something isn’t right there on the surface it must not be there at all, right?

What do we miss when we focus on an aesthetic, independent of substance? Can we even tell the difference? What is a secretive art when it’s also a hashtag? A commodity? What good is infighting over authenticity when we spend more time sneering than practicing?

March 13, 2016
Building Fences: Vouching, Communities, and the Internet
Next Post

March 31, 2016 Productive Anger
Recent Comments
0 | Leave a Comment
"These are all really interesting to hear, and it is something I ponder as I ..."
Weaver Beginner Books that Don’t Suck
"My great-grandmother was a Mooney, down in Conecuh County, Alabama."
Jennifer Chappell Saying Hello to a New Year
"Hi Gordon, maybe if you try to put your hand and pen above the line ..."
Carolina Norambuena A Witch’s Guide to Fountain Pens
"You touch on it a bit, but how similar, in your experience, are pagans when ..."
Chris Mann Talking to Gods
Browse Our Archives
Related posts from Oathbound