Five Things I Wish I’d Known as a Beginner 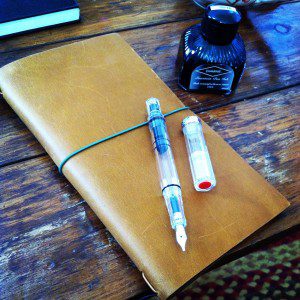 I make it a habit to go back regularly though some of my Craft journals and revisit my own progress. It can be really embarrassing at points, but I always learn something. Out of every magical item I’ve ever acquired, these journals are my most valuable. I can only hope that someday, whoever inherits them will understand that they represent a constant work in progress—not the achievement of any kind of finished product—and judge me gently.

Given that I like to look behind and consider where I’ve already been, and fueled by the investments I’ve made in training an outer court, I thought it might be worthwhile to compile a list of some of the things I wish I’d learned sooner. There’s some value in discovering these things on your own—actually that’s really the only way to do it—but I’ve also found that all of these lessons bear periodic repeating. You don’t just learn them once and move on. I come back to these over and over:

1.There will always be someone there to tell you you’re doing it wrong.

I remember the first time someone on the Internet called me a fluffy bunny. They didn’t know me, of course, but I had said that I liked Silver RavenWolf (I still do, for the record), and that, back in the early two-thousands especially, was as good as pasting a bullseye on your ass. Especially if you were a teenaged girl (teenaged girls are constantly being told that the things they like are crap and don’t matter—have you noticed?). Later on, I would join a grove in the tradition of Blue Star Wicca, and happily begin building a place for myself. I was suddenly allowed to feel superior to my prior Wiccan practices because here I was, finally studying with a group! Isn’t that what I was supposed to be doing? I remember identifying myself as a student of Blue Star—also on the Internet (where it’s so easy to feel safe behind harsh words)—only to earn a condescending, “Well, that’s an okay place to start, I guess” from someone who identified as an Alexandrian. Years later, when I became a Gardnerian initiate, it was, “Yeah, but you’re an American Gardnerian,” or some such. More years, and now I get, “Yeah, but you’re a Wiccan, not a serious witch.” Or, “Yeah, but you’re not from a family tradition.”

There’s just no winning, is there. It’s always something.

The lesson here is that you can’t please everyone. There are exactly as many ways to be a witch as there are people who identify as witches. You could literally call the gods into physical manifestation or transform toads into crows, and there would still be someone standing nearby to say, “Yeah, but they aren’t very big crows.”

2. There’s more of us than you think.

I never stop being surprised at the places and times that I encounter other witches and Pagans. They pop up unexpectedly…in tiny, conservative towns, in groups of old friends, amongst work colleagues, in my own extended family, standing next to me in line at the grocery store. And you know what I find when I talk to them? They all seem to think they’re alone.   It hardly even seems to matter where.

It’s true that some of us are genuinely isolated, but I think we’ve also collectively built this mythic narrative where we all have to suffer through feeling outcast in order to become Pagan. My first books—and plenty of the ones that come out now—fueled this myth, with dire warnings about being mistaken for a Satanist, alienating my family, or losing my friends. Imagine my surprise when none of those things happened to me. Even in the South. Even as a public school teacher.

Don’t get me wrong, I know it isn’t safe for everyone. I know I’m lucky. But I think it’s safer than we collectively tell ourselves. Whether or not you choose to be open—and this is a personal choice that is only yours to make, and you may make it sometimes and not others—it’s often at least worth taking some comfort in the knowledge that, statistically, you’re probably not the only one doing so. There are more and more of us every year, if book sales and census data are any indication at all. It is amazing who and where we are.

3. All books are inadequate.

I wrote a whole article about this here.

Books are awesome. Read as many as you can. But stop looking for the perfect one, and stop casting off others because they aren’t perfect. Find the nuggets of value amongst the crap and assemble them into something coherent that benefits your practice. Even the really shitty books can still serve as cautionary tales, or provide some insight into the personal practice of the author. Even the books that strike you as brilliant and flawless will sour, at least a little, as you age and acquire experience. And those brilliant, flawless books, further, are only brilliant and flawless for some readers (some of us, of course, will still insist on doing it wrong).

4. Just do the fucking ritual.

Most of the newcomers I meet agonize over performing their first rituals. Sometimes, the time in between reading that first book—having that first encounter—and working up the gall to do something about it is years.

I remember my first solitary sabbat. The first time I ever cast a circle. The first time I ever tried talking to the gods. I remember that Halloween night coming to a close and suddenly having the realization that, wait, I could actually do something. And I ran upstairs and took my costume off and actually gave it a go. Finally. I remember the excitement. I’d been reading for ages, it seemed. I don’t even know what I was scared of. Getting it wrong? Forgetting something important? Feeling stupid? Well, those things are practically guaranteed. I did all of those things that first time. And I did all of them again after that, plus lots of other things that I hadn’t even realized I could fuck up. But I also felt incredible and learned a ton. And I got better in time and started figuring things out. I lost a lot of time waiting for a perfect moment that never came. I don’t know what happened that first Halloween that spurred me to action, but I’m grateful for it. That one, small decision changed everything for me.

Whatever that first hurdle is for you, just do it. Accept that it won’t be perfect and treat it like what it is: a beginning.

Pay them the respect that they’ve earned, but don’t hold them to inhuman standards and forget that they’re people, with struggles and foibles and bad days. Their duty is to preserve the tradition to which they’ve made their oaths, training subsequent generations and providing guidance over years of hard experience. That’s a tough job that most of us—myself very much included—can’t fully appreciate. It’s critical—and comforting—to remind yourself of that fact that they’re, first, people.

There’s plenty more that I could write, but these are the things I come back to over and over. I forget sometimes, then I encounter the lesson again and am reminded, often harshly. So I put this here just as much for myself as for anyone it might help.

May 22, 2016 Starting Over: Rebuilding a Solitary Practice
Recent Comments
0 | Leave a Comment
"These are all really interesting to hear, and it is something I ponder as I ..."
Weaver Beginner Books that Don’t Suck
"My great-grandmother was a Mooney, down in Conecuh County, Alabama."
Jennifer Chappell Saying Hello to a New Year
"Hi Gordon, maybe if you try to put your hand and pen above the line ..."
Carolina Norambuena A Witch’s Guide to Fountain Pens
"You touch on it a bit, but how similar, in your experience, are pagans when ..."
Chris Mann Talking to Gods
Browse Our Archives
Related posts from Oathbound