How to Choose Better Books (and appreciate the moderately crappy ones)

In addition to Lynyrd Skynyrd and generally being shunned by more “serious” colleagues in more expensive blazers, Giles and I have this is common: books.

Smelly, glorious, tangible books. God. I just love them. I routinely choose books over food or being social. I would rather read than talk to almost everyone. When someone walks into my home for the first time, the first comment is, without fail, some variation on, “That’s a lot of books,” (to which I reply, “This is just the overflow…most of them are upstairs.”).

Part of it is coping and comfort; a book can’t yell at you or cheat on you or trash your kitchen when it drinks the rest of your beer without asking.

The other part of it (and this is what I tell my elementary students) is that books can help you to learn about literally anything, whether it’s gardening, fixing cars, World War II, dental surgery, tanning animal skins with brains, or summoning demons. Books can help you on your way.

I’m not alone, of course. Pagans tend to love books. Witches in particular have buttloads of lore about magic books (and how we should be writing our own), so we tend to be particularly obsessive. I think because so many of our traditions are decentralized, rooted in historical reconstruction, passed in pieces across a variety of sources, or handed down through text, books and literacy are particularly important. We aren’t generally practicing “text-based” religion in the conventional, academic sense (i.e. there’s no Bible or Torah), but our traditions are nonetheless driven by the written word.

But books can also be frustrating. Finding useful things to read is a challenge that many of us face over and over. Given that it can be challenging, I offer the following in making better choices: 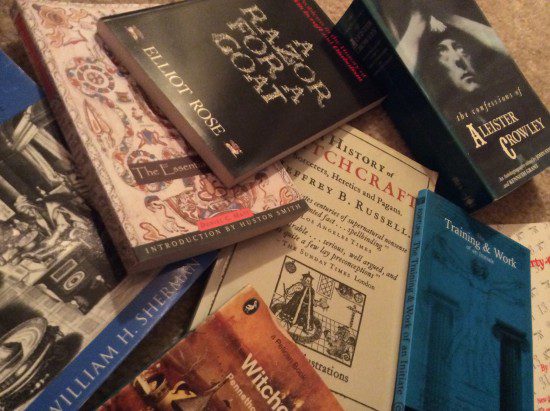 “Is this book any good?”

This question—so casual, so seemingly innocuous—is my pet peeve. People ask me this at the witch shop all the time. Friends who should know better ask me this (I love you guys, but seriously).  All. The. Time.

More than college seniors who still write “alot” or my pretentious American professors who use “cheers” as an e-mail closing, I have a visceral reaction to the above. It’s just kind of a terrible question.

Usually, I probe with:

“Well, what are you interested in learning about?” or “What are you trying to do?”

And then I end up finding out that the inquirer wants guidance on invoking demons into a magic triangle and bidding them to destroy his boss, and I explain, yeah, maybe Thea Sabin’s Wicca for Beginners isn’t a good book for that.

Usually, what people really mean to ask is, “Is this book worth the small amount of expendable cash I have, or is there a better option for learning about [x]?” or “I want to learn how to do [x]; will this book be useful for that?”

And those are completely different questions from, “Is this book any good?”

It used to be that books on witchcraft, magic, and the occult were challenging to come by. Things have changed dramatically from even when I first started (I had to turn to eBay—new and exciting Internets!—for copies Meaning of Witchcraft and Witchcraft Today, which weren’t popularly reprinted and available at the time). Now there are countless titles available, from major publishers and independent specialty presses. You can go to any chain bookstore and have dozens to choose from. You can turn to the Internet and have thousands. You can drop hundreds of dollars on leather editions at Three Hands Press, or you can turn to Lulu.com to buy self-published works from your favorite blogger (or just some magical dude in a basement somewhere).

Finding “good” books can be overwhelming, no matter what “good” means for you.

There’s a lot to be said for just stumbling into something that looks interesting, but if you’re conducting more serious exploration or focused research, you have to narrow things down. What are you actually interested in getting out of a book? Because, odds are, if you’re shopping in the occult section you’re not just looking for something to soothe you before falling asleep at night.

Because there’s such a glut of books on the market now, it’s worthwhile to take a shot in the dark and be as focused as possible (asking for “something about whether or not I can practice witchcraft as a Christian” versus “more about witchcraft”).

If you’re interested in putting spells on your husband, shapeshifting, or making flying ointment, ask whether or not the title in question might be useful or enjoyable in light of those things. Don’t just hold up a book and ask, “Is this good?”

“Is this book well-researched?”

“Is this book good for a beginner?”

“Does this book contain a lot of the same information as [author’s] other books?”

“Will this book help me learn about [awesome thing]?”

“Do I really need to drop $25 on this book, or can I get similar information online?”

Narrow your questions and your local book dealer won’t make that sound at you next time. You’ll also stand a better shot at finding those “good” books you want.

Everything is kind of mediocre.

The other, related issue (actually, all three of these issues are related) is that most books just aren’t great, in any sense of the word.

Pagan and witch writers tend to rehash things, cite the same sources, and approach things relatively uncritically. Collectively we’ve come a long way—and there are certainly some gems out there—but most books just aren’t going to blow your doors off the way you want them to. That’s not to say they’re bad, but average is average for a reason.

I’ve read enough books about witchcraft that it really takes a lot to surprise me, offend me, or elicit any strong emotions at all. I always take notes while I read, and increasingly they include bullets like, “the usual stuff about killing toads” or “magic grandma blah blah blah” or other code phrases that indicate familiar tropes. Nothing new under the sun and all that.

So why keep reading?

Well, partially it’s because there’s always, at the very least, something to learn about the private practice of the individual author. I’m constantly looking for wider trends across books rather than just within one, because that says just as much about contemporary Craft as anything. I don’t really care what Michael Howard (or whoever) thinks happened amongst 19th century Welsh witches according to some anonymous informant I’ll never be able to verify. But I do care if that same information starts circulating amongst other writers, showing up on Tumblr in weird ways, impacting the rituals I see at public events, and subsequently becoming witch “canon” amongst people who don’t even know who Michael Howard is.

I think that sort of thing is fascinating, both as a witch and as a scholar. That’s how folklore develops and traditions are built, and there are few things as magical. Books don’t arise in a vacuum. They’re produced by people who exist in particular contexts. The contexts themselves are worth considering, not just the books they inspire. You’re never just reading a book; you’re learning about an individual person and the time in which they’re writing.

More simply, there’s usually something worth considering in any given book. If you’re creative and diligent (and being a solid note taker helps), over time those tiny nuggets of usefulness can represent real changes in your own practice or thinking.

“There aren’t any advanced books!”

Pagans and witches are always collectively complaining that there aren’t enough books for advanced practitioners (even now), but this concern is just completely groundless.

There is a ton to read. Gobs. There is so much to read that you could never possibly read all of it. Even if I were to just stick to works that related to witchcraft or assorted kinds of paganism directly, I will never have the time to get to all of them, and this fills me simultaneously with joy and despair.

The unabridged version of the bolded exclamation is actually, “There aren’t any advanced books in the New Age section at Barnes & Noble!”

Hint: the advanced books aren’t in the magic section. They’re in the mythology, folklore, anthropology, and history sections. I can almost (almost) promise that they don’t have “Wicca” or “Pagan” in the title, either.

Many of them aren’t in the store at all. Academic texts and specialty occult books (like grimoires or highly-focused, niche titles) appeal to very small, specialized audiences, and most retailers don’t (or can’t) carry them. That’s true whether we’re talking Barnes & Noble or a witch bookshop.

Unfortunately, these kinds of books tend to be very expensive, particularly if you also have to pay shipping. Some of them—like those produced by Three Hands Press or Troy Books—are designed to appeal to collectors, and are printed in limited runs, which drives up the market value (my working partner refers to these as “the Beanie Babies of occult books”). Academic books are also printed in small runs, and often don’t make it to paperback, given the limited audience. That ivory tower exists in Craft, too, and the best thing to do is often to keep an eye out for used copies, second runs, or (in the case of academic books) take advantage of interlibrary loan.

But they’re out there.

One strategy for finding them is what I think of as “reading backwards”: you pick a book you enjoyed, turn to the bibliography, and start reading the books the author cited. If there isn’t a bibliography (and this is usually the case for books by Llewellyn, Weiser, or other popular presses), it’s likely that the author mentioned someone who influenced them at some point in the text. I read Sybil Leek because Silver RavenWolf mentioned her in the introduction to Teen Witch. From there, it was a short leap to Gerald Gardner, Aleister Crowley, and Charles Leland. And you can keep moving backwards, from Gardner to Margaret Murray, then to James Frazer, and on and on. It never ends. And all from Teen Witch, of all books.

Stop only looking for books on how to be a Heathen and start reading the sagas.

Stop buying books about animal omens and actually read something about whatever animal you’re interested in.

Stop buying books on Wicca, hoping for something advanced, and start reading about the traditions and people that inspired and developed Wicca.

Locating advanced books isn’t an intuitive process. Research is an acquired skill (which is why we learn about bibliographies and citation practices in school) that needs to be practiced. Start by being as specific as possible in your searches (getting broader as you need to), and use the “backwards” method. That’s a good way to go until you get the feel for where to look.

September 7, 2015
Why I Skip the First Chapter: A Poem
Next Post