The Biden-Communion Controversy is Ramping Up

The controversy is intensifying head of next month’s U.S. Conference of Catholic Bishops’ meeting, when it is expected that the bishops will at least discuss a document regarding “Eucharistic coherence” vis a vis Catholic politicians who support legal abortion.

The latest development is the new pastoral letter written by Archbishop Salvatore Cordileone of San Francisco that emphasizes “those who reject the teaching of the Church on the sanctity of human life and those who do not seek to live in accordance with that teaching should not receive the Eucharist.”

“Those who kill or assist in killing the child (even if personally opposed to abortion), those who pressure or encourage the mother to have an abortion, who pay for it, who provide financial assistance to organizations to provide abortions, or who support candidates or legislation for the purpose of making abortion a more readily available ‘choice’ are all cooperating with a very serious evil,” the archbishop wrote.

The archbishop’s pastoral letter – called “Before I Formed You in the Womb I Knew You: A Pastoral Letter on the Human Dignity of the Unborn, Holy Communion and Catholics in Public Life” – is the first such document he has issued.

Archbishop Cordileone was also one of several bishops quoted in a recent Associated Press story reporting on the communion controversy with Biden, a Democrat who supports keeping abortion legal and has taken steps since becoming president to widen access to the procedure, such as rescinding the Mexico City Policy that the Trump administration had expanded. In the AP story, Archbishop Cordileone is quoted as saying “there’s a growing sense of urgency” regarding the issue of pro-choice Catholic politicians and the Eucharist.

“They need to understand the scandal that is caused when they say they are faithfully Catholic and yet oppose the church on such a basic concept,” the archbishop said.

Catholics who voted for Biden or lean progressive in their politics have been pushing back on social media and via commentary in some publications. For example, National Catholic Reporter political columnist Michael Sean Winters argues in his latest column that it is the bishops who are causing scandal and politicizing the Eucharist. He accuses the bishops of basically playing the ecclesial equivalent of The Big Lie – the false belief that the 2020 election was stolen from Trump – to undermine and delegitimize Biden. He writes:

“What does scandalize us is that the bishops would engage in this kind of hyper-partisan willingness to highlight some issues and ignore or denigrate others. It is they who “isolate some particular element to the detriment of the whole” yielding the very adjective they now seek to employ: incoherence.”

Winters also makes the point that the matter of pro-choice politicians receiving Holy Communion is decided at the local level by the said politicians’ ordinary. In Biden’s case, it would be Archbishop Wilton Gregory of Washington D.C., who to date has said he wouldn’t deny the Eucharist to Biden. In addition, the likelihood of the bishops conference passing a major teaching document on Catholic politicians and the Eucharist is unlikely given that such a document requires a 2/3 affirmative vote among bishops, which Winters writes is “highly doubtful.”

Meanwhile, Jesuit Father Thomas Reese writes in his Religion News Service column this week that this whole controversy is “stupid” for reasons that are canonical,  theological and political

“First, and foremost, the U.S. Conference of Catholic Bishops does not have the canonical authority to tell Biden that he cannot go to Communion.”

“Second, theologically, no one is worthy to go to Communion. We are all sinners, and it is God’s gracious kindness and love that invites us to the Lord’s table. We do not earn the right to Communion.”

Bishop Robert McElroy of San Diego, in an essay published by the Jesuit magazine America, criticized the campaign to exclude Biden and like-minded Catholic public officials from the Eucharist.

“It will bring tremendously destructive consequences,” McElroy wrote. “The Eucharist is being weaponized and deployed as a tool in political warfare. This must not happen.”

Judging from the commentary on Catholic Twitter and elsewhere, those who are critical of the bishops believe they are out of touch after four chaotic years of the Trump Administration, when migrants were separated from their children at the border, racist dog whistles were employed to embolden white nationalists, the U.S. went backwards on caring for the environment and mitigating climate change. To be fair, the bishops issued press releases on those issues during the Trump years, at times taking the administration to task, but the criticism from progressives is that the bishops were never “all-in” in on any of those issues, including racism, and that now they are acting like partisans as the electorate, the majority of Catholics included, voted for Biden because they were tired of Trump’s antics in office.

It’ll be interesting to see and hear the discussions of this issue when the USCCB meets for its spring general assembly, scheduled June 16-18. If anything, it’s probably a debate that is overdue and will be relevant for years to come given the nation’s political landscape, deepening polarization and lingering questions about just how much moral authority the United States Catholic bishops have after the last 20 years of clergy sex abuse scandals and growing disillusionment with religion among young people. 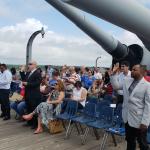 May 2, 2021
Catholics Should Have Nothing to do with Know-Nothings
Next Post