I’ve always mostly liked the word Pagan. For several years it was my primary identifier when it came to spiritual matters and I still use it to primarily identify a whole host of things. I manage the Pagan channel at Patheos for instance, I’m also a part of the greater Pagan Community, and I go to Pagan Gatherings when I attend a festival or conference. It’s a word that’s still very much a part of my life, and one I probably say or type ten or twelve times a day. Today I find myself primarily identifying as a Wiccan-Witch with the Pagan-part second, or sometimes even third, but Paganism remains a part of my life.

Though I think the word Pagan has value, I also know that it’s problematic. There are many who believe that the word works better as the signifier of a social group, instead of a religious or spiritual one. There’s a lot of truth in this, since the myriad of Pagan practices today are extremely diverse and come from a variety of sources. The first modern groups we’d call Pagan were inspired by ceremonial magick, fraternal orders, and ancient Western paganisms (think the mythologies and practices of Greece, the Norse, Egypt, and the Middle East). Many of today’s Pagans are inspired by Science-Fiction*, folk-magick traditions, super-heroes, and all sorts of other things. In addition, what was once mostly thought of as a soft-polytheist soup is now populated by committed atheists and equally committed Devotional Polytheists, with the latter often actively bristling at being called Pagans.

Recently the Agora blog ran an article by Mitch Horowitz about Hermetic Literature. I thought it was a great article and was thrilled to be publishing something by Horowitz (his book Occult America has inspired me over the years to look into all sorts of magickal and occult practices), but I don’t think he identifies as a Pagan, though an article on Hermeticism feels very at home to a lot of Pagans. But where else at Patheos would you put an article like that?

Pagan in some ways feels like a catch-all for all sorts of magickal practices even if those practitioners don’t call themselves Pagan or hang out in Pagan spaces (both online and off). New Orleans Voodoo is a good example of this. There are some practitioners of Voodoo who happily identify as Pagan and interact with greater Pagandom (thank you Lilith!), but there are probably many more who do not. They have some good reasons for doing so too, considering Voodoo is far older as a spiritual practice and comes from different root sources than most of the Modern Paganisms the majority of us are familiar with.

There are also all sorts of magickal practices that many of us are comfortable with that have roots elsewhere. Over the last twenty years we’ve seen a revival of interest in the practice of Conjure and Hoodoo in the Pagan Community, but both** practices have Christian roots and origin points that are very different from those that spawned Druidry and Wicca. Many folks who practice Conjure actively identify as Christians too, though many Conjure practices seem right at home in a Pagan circle. Practices derived from English cunning-craft are similar, long dead practitioners of that art would have identified as Christians, and operated in opposition to Witches, they certainly didn’t see themselves as Witches, let alone Pagans, even though their world-view looks familiar to a lot of us today.

I know several astrologers whose world-views are sympathetic to my own, and again, they don’t call themselves Pagans. Browse around the Spirituality Channel at Patheos and you’ll find lots of content that feels like it might have a place in our community, yet the creators of that content chose to be somewhere outside of Pagandom. Nearly all of my life I’ve been interested in paranormal phenomenon and nothing in that realm is really Pagan, though you’ll see folks who study it at Pagan gatherings from time to time, and many Pagans who are fascinated by it (just like me).

I don’t have a word to replace Pagan, or a word or phrase to describe the diverse amount of beliefs I’ve touched on in this article, but while trying to sleep last night I couldn’t help but think how most of these practices come down to two things: openness and the ability to see something greater than one’s self. To believe in magick one has to first be open to the possibility to that it exists, and we all know lots of folks who can’t even conceptualize a world where magick is real.

Openness also requires admitting other people into your space even when their world-view is different. I know several evangelicals whose practices are not that far off from my own. They believe Jesus can change things in their lives (gods have agency), and their prayer services sometimes feel like an energy raising. But they are different than me because they aren’t open to other deities, and they see magick either as non-existent, or a trick by the Devil. Astrology, Angels, the Gaia Theory, even ghosts and UFO’s require a belief in something greater than one’s self.*** (I’d say that flying millions of lightyear and interacting with the living post-death probably account as “greater” than myself.) Couple that idea with being open to others and not dismissing them entirely and you have the building blocks for a bigger, wider perspective.

Of course this leaves out many of my Atheo-Pagan friends who actively scoff at magick and deity. Of course not all of them dismiss it entirely out of hand, but there are many loud voices who do, and just don’t seem to realize that you can disagree on the existence of the gods without being an asshole. Dismissing something as “nonsense” is not a conversation. Openness means being open to all sorts of ideas, and my whole life has been a battle between the believer and the skeptic in me.

There’s a bigger world than just “Pagan” out there, with an awful lot of other folks who think like the majority of us. How we all manage to fit together and find one another is another issue.

*I realize that this one goes back to the 1960’s and the Church of All Worlds.

**Traditionally these two words are synonyms, but I see “conjure” used with increasing frequency to describe several different types of folk-magick.

***Note, I’m not saying that the UFO cults like Heaven’s Gate have anything in common with the Pagan Community, but there are some who do. It’s likely that channeling the alien entity Ashtar has roots in practices from the Theosophical society and it was contemporary with Modern Witchcraft. I’m just saying that sometimes we are closer to this stuff than we think we might be. 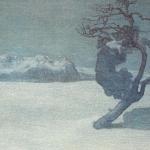 October 11, 2017
Bad Witch: Things Other Witches Do That I Don't
Next Post