I confess that I think supporting Donald Trump because “we need to shake things up in Washington” is like saying, “Our kids need to make some changes. Let’s put Hulk Hogan in charge of them.” I’m really tired of that narrative. It’s irresponsible.

I confess that I believe it has never been more important to be vigilant about the news. We need to stay informed. This is not a left or right thing. This is a human thing. Donald Trump is dangerous, and needs to be watched.

I confess that I would not advocate such vigilance if, say, Al Gore, John Kerry, John McCain or Mitt Romney had won the presidency. Those guys are pretty normal. Donald Trump is categorically different. He doesn’t understand our system of government. He doesn’t know history or the law. He doesn’t freaking read! Even worse, he has no integrity and bad character. Donald Trump is truly dangerous to the world and completely ill-suited for his job–and it’s kind of an important job. We all need to stay informed and keep him in check. But, being informed is not that easy.

Here’s a truth that you can take to the bank: to be a human being is to be a walking, talking, media consuming, confirmation bias machine. We ALL interpret facts and evidence in such a way that they confirm our deeply held beliefs. When we consume only media that confirms the convictions we already hold, we embrace confirmation bias, and we commit to living inside a distorted reality. I have to confess it: I am a walking talking confirmation bias machine. So are you. If you cannot admit it, then you are in serious denial.

If you spend your free time hate-watching Infowars, binge-reading Breitbart and Daily Caller articles, compulsively clicking Drudge report links, and investing long hours breathing only the air from inside the Fox News bubble, then you are becoming less human, less informed, and less able to imagine a world in which we are all working together for a better future. Those things are toxic to your soul and you need to stop.

If you spend your free time hate-watching Rachel Maddow, binge-reading Mother Jones and Daily Kos articles, compulsively clicking AlterNet links, and investing long hours breathing only the air from inside the Crooked Media Podcast universe, then you are becoming less human, less informed, and less able to imagine a world in which we are all working together for a better future. Those things are toxic to your soul and you need to stop.

If you want to be part of the solution and not the problem, then you need to wean yourself off of the toxic fringe media on either side. We all need to be well informed. But, we cannot be well informed if all we do is feed our own skewed media bias. We need to get news from real reporters who conform to the SPJ code of ethics.

I confess that I wish I could get you, dear reader, to stop engaging only those forms of media that feed your confirmation bias, and start to read outside your bubble. Here’s where I would start. Restrict your media diet for a few weeks. Cut out cable news (Fox News, CNN, MSNBC), and read for a change. Unplug from left/right wing blogs, Twitter, and news sites. Better yet, block them on your device so you are not tempted to reengage. Don’t go to your usual sources. Instead, try to read news providers, and avoid the editorials for awhile.

These folks, for the most part, won’t do you wrong:

That’s my confession for this week. Time for you to make yours… 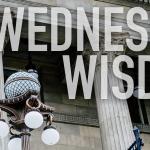