Within the Borealis Polus Axis the view of the sun is sinking towards the horizon, and within the Australis polus Axis it is getting brighter.

South of the Borealis Polus Axis it is the beginning of harvest season and it is the warmest time of year.

For the Tropics, this is when the Tropical Rain Belt is at its most northern point in the year. In the Northern half of the Tropics monsoon season has begun where monsoons occur and it is the wettest time of year, getting the majority of their annual rain fall during this time. Hurricanes will also be increasing in frequency in the Atlantic. On the continent of Africa the rains on the Ethiopian and East African mountains would bring the flooding of the Nile to its peak this time of year* Many regions in the Borealis Tropics are beginning to sow their crops as a result of the fertility the floods bring and the much needed rains.

South of the equator it is the coldest time of year and the driest for most regions. Certain regions are having a second harvest or sowing.

In Borealis, most of the climes are celebrating the beginning of the harvest season. In particular the first grains and fruits of the year.

Various activities around this time of year include: Ceremoniously harvesting the first corn or sheath of grain, a blindfolded individual harvesting the last sheath of grain, going out for berry picking, bringing the various grains harvested as offerings to the local rivers, celebrating the fertility the monsoons bring with floating offerings of in season vegetation, sowing for second harvest, offerings of various sorts are tossed into water bodies to seek blessings from a deity, decorating selves with feathers moulted by birds this time of year for celebrating fledging from home and for attraction in courtship, giving heart shaped pastries from the first harvest of grain and fruit as a courtship offering, Handfastings and weddings, ceremonies of thanks for harvest of grains and fruit, feasting, fire baking bread, wine making, libations of said wine, and rituals to prevent wildfires.

In Australis,various activities in Australis include: well springs are visited, offerings made to spring and spring waters gathered for use as blessings, bonfires, preparing materials to be used for celebrations in the coming year, greeting cards with hidden messages sent to loved ones, having a clue based treasure hunt, crafting gifts for babies yet to arrive in late spring and expecting parents, house cleaning and house warming parties.

*In 1970, the High Dam at Aswan was built and the flooding of the Nile stopped down stream. Those farther north no longer have the silt from the flooding to farm on and now bring in fertilizers.

This year has seen monsoons and rains that have been the heaviest since recordings began, breaking many records and causing great infrastructure damage. (search Alberta, Toronto, and India Flood) 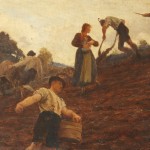 August 2, 2013 Being a Part of Something Bigger Than Ourselves
Browse Our Archives
Follow Us!

Solitary Self-Initiation or Dedication. Does It...
3 Pagans and a Cat
Related posts from Paths Through The Forests