The Entire Universe is a Sacred Site

The topic of sacred sites (or power spots, or whatever term you prefer) has come up a few times for me lately. I wrote about it some in the book on bioregional totemism I’m working on, and more recently it was the topic of Sam Webster’s post on the Wild Hunt. In the latter, the point was made that we live in a very different world than the pagans of two, three, four thousand years ago. Today, the land all has a title deed attached to it, and you can’t just plunk down a shrine wherever you feel the sanctity flows best. There’s the additional conundrum that most neopagans today do not have a tradition spanning back thousands of years, surrounding one particular piece of land. And most of us don’t even live in the place we were born.

So how do we not only establish a relationship with the land we live on, but determine what places are sacred? There are a number of solutions that have been offered. One is to (to the best of one’s ability) adopt the practices and sacred places of the people who are already living there, and try to do right by what they consider to be most important. How well this goes depends in part on how willing the local people are to share their traditions with outsiders; some pagans may only be able to research these traditions through third-hand sources, and try to respectfully emulate them. Another solution, of course, is to create your own traditions for the land you’re on, which sometimes means creating them from scratch. If you’re already a part of a given tradition, you might try applying your traditions to the land you’re on, to include honoring local sacred sites as prescribed by your path.

But this all supposes that certain places are inherently more sacred than others. One of the things I’ve come to feel over time is that all places and things are sacred. My path is specifically designed to remind me of this, even at the most supposedly “mundane” moments. The example I brought up in the comments to the post was the act of taking a bag of trash out to my apartment building’s dumpster. It’s messy, and smelly, and I feel bad because even though I separate out everything that I can recycle in Portland, and compost our food scraps, there are still things that end up in that waste stream. But this only serves to reinforce to me that all things are interwoven, and that every action I take has a consequence for myself and others.

And it’s those relationships that are sacred to me. The very fact of the existence of the universe and all its parts is another source of wonder and awe and reverence, as are the forces which bring everything into being and pull them apart again. My goal is not to have certain places or things that trigger the feeling of holiness, but to live in a mindset where everything is holy. If there is sacrilege, it is only in the forgetting of this sacredness, and the harmful actions that result. And the solution is not to guilt or to rain down righteous wrath, but to guide and model–and, more firmly, to inform and educate and sometimes to take action. Mine is not a spirituality of expecting unnatural perfection and punishing anyone who fails, but of accepting the flaws and growing pains of humans as individuals and as a species, and working them into a more realistic plan for improvement of ourselves and our world.

Every place holds opportunities for reconnection and growth and being better to each other and the rest of the world, and it’s only that we don’t open our eyes to the possibilities. I don’t look at landfills, for example, as pits of sin punishable by a fiery afterlife decreed by Mother Nature. They’re awful ways to treat those places, but they’re also opportunities to reflect on how much we take the land and its resources for granted, and to find better solutions as individuals and as a society. There’s no equivalent to saying five Hail Marys for throwing away a plastic bottle or wearing a hair shirt for not fixing the oil leak in your car soon enough and letting the oil wash into the storm drain and from there to the river. What there is, is awareness of these consequences and the choice to act differently in the future.

If I limit myself to this awareness of sacredness only at certain locations and times, I’m contributing to the destruction of everywhere else. We treat our sacred sites particularly well because we think they deserve our regard, but then that also means we treat other places less well. The whole idea of sacred/not sacred is, I think, a false dichotomy, and we all too often feel justified in using and abusing the not-sacred since it’s “not good enough” to be respected. By seeing even the landfill as a sacred place, it makes us consider how we’re treating that place. We no longer take it for granted, and we examine the things we did to get it in its current condition.

It’s okay to attach extra personal meaning to some times or locations. I was raised Catholic, and I recognize that for some people, having certain places set aside for worship at particular times is what keeps them connected to what they see as holy. I prefer a more fully integrated approach–not lowering the sacred places and times to a mundane level, but elevating all times and places to the level of sacredness. Are there certain places that I feel especially connected to or that I find particularly inspiring? Of course. But I strive to see all places in that light, not just a few. It’s doubtful that, being human and therefore distractable, I’ll ever accomplish being in a 24/7 state of sacred awareness, but it’s a good ideal to work toward. 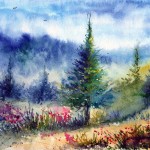 May 28, 2014
Wordless Wednesday: The call of summer
Next Post

May 31, 2014 Look & Find - Rocky Field
Recent Comments
0 | Leave a Comment
Browse Our Archives
Related posts from Paths Through The Forests