Love Letters To My Ancestors – II

Note: This is part of a collaboration between the Patheos Pagan channel, and an assortment of other Patheos bloggers. I paired up with the Reverend Sam Alexander, who blogs over at Christianity For the Spiritual But Not Religious. He’s been writing a beautiful series of love letters to a variety of recipients this October, and as part of my own exploration of my ancestors, I wanted to take a page from his book (as it were). So I will be writing three love letters to some of my ancestors this Samhain season; this is the second, and the first may be found here.

To My Non-Human Ancestors,

It’s so hard to look back along your long and varied line. It’s no mere 100,000 years, but billions of revolutions around the sun. How can I even wrap my mind around that much time, when I measure my day in breaths and clocks? It takes a split second for a predator to take the life of a prey animal; this happens millions of times each day. How many births and deaths has this planet seen? Surely those transitions are among the most ancient and powerful rites in existence.

And yet–and yet–though you who are not human can account for almost every single birth, life, and death, in fin and chloroplast and joyful meiosis, you are largely forgotten in the grand parade of ancestors. We are the youngest children in the line, and like children we sometimes hide out on our own and pretend we’re surviving alone in the world, treating our little playhouse like the big bad woods. Trouble is, we’ve been taking too many pot-shots at our proper home, and our imagination is not enough to shelter us if it crumbles for good.

You are the ancestors no one mentions and everyone owes their existence to. Why, if it weren’t for the first notochord we wouldn’t be standing upright. Eyes have evolved countless times over the life of this planet, but not all like ours; had things gone a little differently we might have had eyes of stone like the trilobites.

But here we are, a tiny smudge in the corner of the planet’s calendar, just a few seconds before midnight at the end of a very long day indeed. I’ll never be able to read every story that this earth has seen, only glimpses of hyaenadons and tree ferns and anomalocarids. But I know you’ve all been here, trillions of individual living beings that preceded me and mine, counting time in impossibly large stretches, and wondering at our hubris.

You are the reason I wish for a time machine. Our human history is only a brief pageflip. I want to see where life began; I want to watch the first creatures crawl onto dry land where fungi and plants had already settled themselves in, thankyouverymuch. I want to not just see the first humans, but all the species that led up to humanity, that one slim branch on a great tree of life. I want to see the tiny proto-mammal in our lineage as she or he darted among the feet of reptilian giants, and I want to see where lungs came from. I want to know which unicellular beings pulled themselves together into chains, and then clusters, and then melded together to become one behemoth on a microscopic scale.

I can never know all of you, but I honor you this Samhain season. You are the forgotten ancestors, though you far outnumber the remembered dead. Maybe I can make up for you being taken for granted, just a little bit. 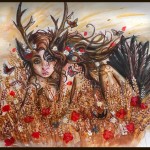