Every Silver Lining Has a Cloud

Every Silver Lining Has a Cloud January 19, 2015 Lupa Greenwolf

But not enough clouds here.

I’ve been watching the skies for months now. Our winter has been disturbingly mild; temperatures have averaged in the high forties to low fifties, and the snowpack on Mt. Hood is entirely too thin. We just got the first solid rain in weeks this weekend, and we’re still behind for this time of year. The ground is plenty soaked now, but what will it be like in six months when the land has to survive on stored water?

Normally I would welcome a warmer winter. I am not a cold weather sort of person, and anything below about sixty makes me shiver. So I should be pleased I can walk around outside without ten layers. But I worry about the future. What’s the price going to be for this seeming respite? Drought? More melting ice further north and much further south? The endangerment and extinction of living beings that simply can’t handle the rising temperatures?

I think back to last July when news came out that the local population of pikas in the Columbia River Gorge are handling the warmer temperatures better than their more mountainous counterparts. I love the pikas here, but I worry that they may end up being the sole standard-bearers for their species. Who will survive in the years to come? Assuming I live to a ripe old age, who will still be around when it’s my time to go?

I look to the sky again. Blue, clear, not a single cloud. The birds fly to the feeders, sleek rather than puffed up; it’s warm enough they don’t need the extra insulation. I’m half expecting early crocuses to pop up out along the sidewalk.

We can’t actually change the weather, not with prayers or rituals or other esoteric means. At best we can seed clouds, and even then we can’t push them in the direction we want. But without even thinking we’ve changed the climate, and there’s no turning that behemoth’s course without a lot of change. The warning signs are there; so are the deniers, with their claims of El Niño and prehistoric glacial melts. We’re stopped at every turn; the behemoth’s momentum increases.

We’re so lost in ourselves, and abstractions of ourselves, that we’ve ignored everyone and everything else. “Nature” has become a niche interest. The clouds, or the lack thereof, go unnoticed by all but a few–the weather-watchers, the climate-watchers, and the ones who complain when the sun’s covered up.

This warm, sunny day is bittersweet. I allow myself a moment to soak in the sun, but it’s not the same as it used to be. 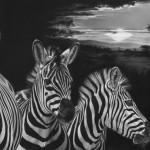 Channeling a God, or Why People...
John Beckett
Related posts from Paths Through The Forests