Dr. Christian Smith (William R. Kenan, Jr.  Professor of Sociology; Director, Center for the Study of Religion & Society at Notre Dame University; author of The Bible Made Impossible: Why Biblicism Is Not a Truly Evangelical Reading of Scripture

) recently contacted me to ask if I was interested in posting some thoughts he had on “the narcissism of small differences,” which Smith thinks is one of the psychological underpinnings of the perpetual theological conflicts that beset conservative Presbyterianism.

I was hesitant at first to post this piece, as I was concerned that, given the topic and my history with this Christian sub-group, my motivations might be misconstrued. I would also have expressed myself somewhat differently on a number of points.

I decided to proceed, however, because Smith’s analysis is clearly applicable beyond the narrow confines of conservative Presbyterianism–a point Smith himself makes. I am confident that others from a variety of ecclesiastical backgrounds will be able to switch names and  particulars and see their own experiences in Smith’s observations.

I would only add that my purpose for posting is not simply finger-pointing. More difficult than offering an analysis of a problem is thinking of constructive ways forward as followers of Christ, truly united in love for the other rather than the self. Every single one of us should take that challenge to heart, and in so doing truly bear witness to the Gospel. But part of that process includes calling the body of Christ to account, and bluntly if needed.

I am sure that these dynamics apply in many non-Reformed and non-Presbyterian circles, but I limit what I say here to them, since I know them best.

Almost all of the people that I know in this world are really good folk. I owe a great deal to them. But for some odd reason, they do love to make huge controversies out of minor issues. The smallest points of doctrine become major subjects of storm and battle. Endless attention and energy gets spent on matters that, with a bit of distance, are clearly tempests in teapots.

Doctrinal controversy seems almost to function as a form of community entertainment, something to prevent things from getting too boring. So, various of them continually “bringing charges against” others of them in their congregations or presbyteries within the denominational “court systems,” which seems to be a never-ending source of interest.

I have always chalked up these pervasive making-mountains-out-of-molehills tendencies to a kind of subcultural trauma suffered during the early-twentieth-century modernist-fundamentalist battles, in which the conservative Presbyterians were trounced in the 1920s—and in particular to losing Princeton Theological Seminary to the liberals (which gave rise to Westminster Seminary).

A kind of post-traumatic-stress syndrome beset the conservative Presbyterian subculture from that trauma, it seems to me, which gave rise to the kind of nervous “doctrinal legalism” that continues today. (Limiting “leadership” to [de facto] white males—the homogeneity of the composition of annual General Assembly photos published in denominational magazines is astounding!— cannot help either, seeing how that tends to skew discussion more toward “principles” than relationships, but that is another story.)

Recently, however, I came across a concept in psychology that I think sheds illuminating light on the tendencies described above: the narcissism of small differences. Now, I am no advocate of allowing psychology to colonize Christian truth—far too much of that has already happened in both mainline and evangelical Christianity. But the narcissism of small differences is too revealing to be ignored.

The term was coined by Sigmund Freud (which unfortunately means that those who most need to understand it will be the least willing to take it seriously). The basic idea is this: groups of people are often most sensitive and snotty toward those who they are most socially alike. Human groups do not have their fiercest conflicts with those who are quite different from them. Instead, they display the greatest pettiness and viciousness in fighting those who they look the most like.

About the narcissism of small differences, Freud wrote: “It is precisely communities with adjoining territories, and related to each other in other ways as well, who are engaged in constant feuds and ridiculing each other,” thus displaying “such sensitiveness…to just these details of differentiation” (Civilization, Society and Religion, Penguin Freud Library, 12, pp. 131, 305).

Now, I think Freud is nuts when it comes to most things he wrote. But he hit the nail on the head with this one. The narcissism of small differences is a clear and widespread dynamic in human social life. We so often consider so important the little things that make us different from those who are otherwise so much like us. So people engage in major efforts to define, elaborate, justify, and police those small differences in ways that usually leads to conflict.

Doing just that helps to solidify a clear and firm sense of self-identity in situations that otherwise might involve some ambiguity (which most people do not like and some sorts of people absolutely abhor). It also helps validate one’s own importance and significance in life and the world, by being an agent defending seemingly crucial issues against similar people who threaten to corrupt truth or violate boundaries. Often the very similarity of the other makes them seem a greater threat as a possible corrupter or misrepresenter of who and what one is and believes.

This narcissism of small differences explains a lot of human conflict in history. It explains why socialist and communist political parties are always so factionalized. It explains why the Amish and Mennonites have split over buttons versus zippers. It explains why residents of Rwanda, ex-Yugoslavia, and other places have found it so easy to exterminate their co-residents who are only somewhat different from them. It explains why “nice” neighbors in “nice” neighborhoods can become so competitive and snarky about symbolic-status issues, like who has the finer lawn mower and greener yard grass.

But for present purposes, what the narcissism of small differences very powerfully explains, I think, is the prevailing tendency among conservative Reformed and Presbyterian Christians in the U.S. to spend so much time, energy, and attention arguing over and policing and prosecuting what in reality are relatively minor—sometimes absolutely obscure—matters of doctrine.

It is not just that they were traumatized by losing Princeton to the liberals and so always feel on edge. Those who sustain the entertainments of doctrinal and biblical legalisms are also in fact so darn similar to each other, and that theological and organizational proximity makes what are often really only very small differences seem life shaking.

That is a form of narcissism. It is narcissistic because it is driven by a quest, very real even if unacknowledged, to feed the importance of one’s own identity even at the expense of others and the church.

If so, this is well worth recognizing. It is not only the American Psychological Association’s Diagnostic and Statistical Manual of Mental Disorders that says that narcissism is a problem. The Bible and Christian Church teachings for two millennia would also seem to have something challenging to say, although in a different language, about the perpetual generation of conflicts and schisms that are driven in part by self-importance and, ultimately, self-love.

July 3, 2012 The Bible is "Broken and Fragile." Deal with it.
Recent Comments
52 Comments | Leave a Comment
Browse Our Archives
get the latest from
Evangelical
Sign up for our newsletter
POPULAR AT PATHEOS Evangelical
1 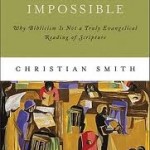