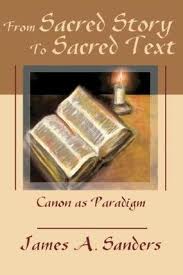 I came across this quote recently from James A. Sanders, Old Testament scholar, translater and editor of the Psalm Scroll (Dead Sea Scrolls), and former professor (retired) from Claremont School of Theology

Another form of idolatry or polytheism that has emerged in Western Christianity in reaction, in part, to Enlightenment study of the Bible, and that needs also to be eschewed, is that of bibliolatry – viewing the Bible as somehow divine. God is divine, not the Bible! Hard-core fundamentalism and literalism, born in extreme reaction to contextual study of the Bible, have so idolized the Bible as to abuse it. Canonical criticism proposes to understand the Bible as canon not as a box of ancient jewels forever precious and valuable, but as a paradigm of the struggles of our ancestors in the faith over against the several forms of polytheism from the Bronze Age to the Roman Empire. (From Sacred Story to Sacred Text, p. 5)

Maybe not the most subtle way of putting it, but Sanders makes a good point.

I resonate with a couple of things here. First, I regularly come across a phobia in Fundamentalism concerning the historical context of Scripture. The reason is that such study presents regular challenges to Fundamentalist ideology. But, a serious study of Scripture in its historical context, however unsettling at first, will sooner or later lead to a deeper, more real place.

Second, when seen in historical context, the Bible is not a collection of proof texts, like loose earrings in a jewelry box, but a canonical narrative. The Bible, despite its historical variety, is a grand narrative compiled and composed in the wake of Israel’s grand national struggle in Babylonian exile, which recounts Israel’s religious struggles throughout its history, both as they contend with the polythiesm of the other nations and with their own struggles with their own God.

From this perspective, the Bible is not a series of verses that tell you what to do or think, but a grand story that shows you what the life of faith looks like.

To paraphrase Sanders, he is saying something like this:

Put the Bible in its place and then you will see its deep religious value. If you treat the Bible as a rulebook dropped out of heaven, you will miss the purpose for which the Bible was written in the first place.

Just something to think about in this Labor Day afternoon.

[Sanders is also the author of Canon & Community: A Guide to Canonical Criticism

and Torah and Canon 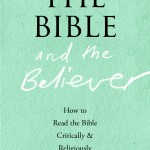 August 31, 2012
Are All Critical Biblical Scholars Godless Atheists Conspiring to Undermine Your Faith?
Next Post 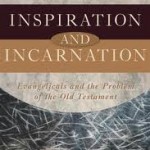