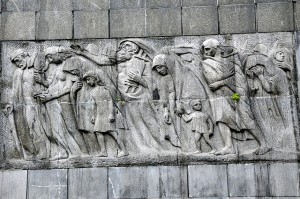 Last week the Wall Street Journal published an article (by Joshua Berman) suggesting the biblical exodus might have its root in an historical event. This isn’t exactly new, but what interested me was the primary reason given— the biblical text seems to be appropriating some Ramesses II propaganda (discovered early in the 20th century) to make a theological point.

Berman writes, “Both written accounts, hieroglpyhic in the case of the Kadesh inscriptions, Hebrew in the case of Exous chapters 14-15, follow a similar plot, sometimes line for line, and feature a sequence of motifs seen nowhere else in battle accounts of the ancient Near East.”

He then gives the following examples:

2. Ramesses pleas for divine help and is encouraged to proceed with victory assured, as does Moses.

3. After the victory, the troops return to survey the enemy corpses and offer up a hymn of praise. Both of these hymns use similar motifs, like “invoking his strong arm, and extolling him as the source of their strength and their salvation.”

As encouraging as these examples may or may not be, they cause apredicament for Evangelicals who insist on the historical accuracy, or at least the historical plausibility, of the exodus story.

On the one hand, co-opting Ramesside propaganda does provide evidence for something historical happening between the Israelites and Egyptians. Otherwise, Berman argues, how, or more importantly why, would the Israelites feel the need to co-opt it in the first place?

However, for the biblical author to co-opt Egyptian propaganda would mean that the exodus probably didn’t happen in the way the story is told in the book of Exodus, since it was more concerned to borrow Ramesside propaganda than document history. (And I’m leaving out the whole issue of just how much historicity the biblical account would contain.)

An analogous situation occurs concerning Canaanite extermination. The biblical rhetoric of complete annihilation matches the rhetoric of extrabiblical sources, namely the Mesha inscription, where Israel is utterly annihilated. (The same word herem–put to the ban, devote completely to the deity—is used as in the biblical accounts). Yet Israel was clearly not annihilated, which suggests that both the biblical account and Mesha’s account are exaggerations and propagandistic. So again, the parallel suggests “something” happened but not what the Bible says happened.

This of course points up the larger question of how it’s too easy to allow historical or cultural evidence that supports your current conclusion about the Bible but dismiss the same type of evidence when it doesn’t. What do you do when it does both?

April 8, 2015
a brief thought on John Dominic Crossan's new book on the Bible and God's violence
Next Post